I’m still waiting for the cooler and other parts to arrive. Meanwhile, I also need to do some work on my 1986 Alfa Romeo Spider.

Between all the big jobs, I had time to do some smaller jobs as well. The list is long and goes on and on. About the first job I did, when I got the Jeep, was to fix two small leaks in the exhaust pipe, unfortunately no photographs. I just used a bit of this metal patch around the exhaust pipe with lots of exhaust paste all around.

At some point I may have to replace parts of the exhaust no doubt. But for the MOT, the entire exhaust system from the exhaust manifold at the engine all the way to the tailpipe must be free of leaks.

The cruise control worked well. Expect me to occasionally have to hit the Cruise Control On button a few times. According to the Jeep manual, you can repair these switches, which are mounted on the steering wheel. I never believe those claims, so I disabled the airbags and pulled the switch.

I just sprayed electrical cleaner in the switch pretty liberally. Waited a few minutes and then blew some compressed air through it (carefully). Has been working fine ever since!

To be on the safe side, I opened the paraphane. You remember not too long ago that on the Spider it was badly corroded. Didn’t really show until I took it off. Under the paraffin is also where leaves and dirt collect, which can clog drains and air vents. So it goes. I was pleasantly surprised by everything. It was bone dry, with very little rust, just a little surface. Virtually leaf- and dirt-free. So just clean it and deal with the rust.

To remove the paraffin, you need to remove the wipers. The arms of the wipers were a little rusty, and the paint had peeled off. So I also removed the rear wiper. Cleaned them, took care of the rust and sprayed them all matte black.

As I already mentioned, the indicator lever/switch was not working properly. I took it out to see if I could repair it. No luck, so I got a new one, which I fitted when I had the streak out a few weeks later.

It’s not that hard to get to this switch, remove some trim around the steering wheel. 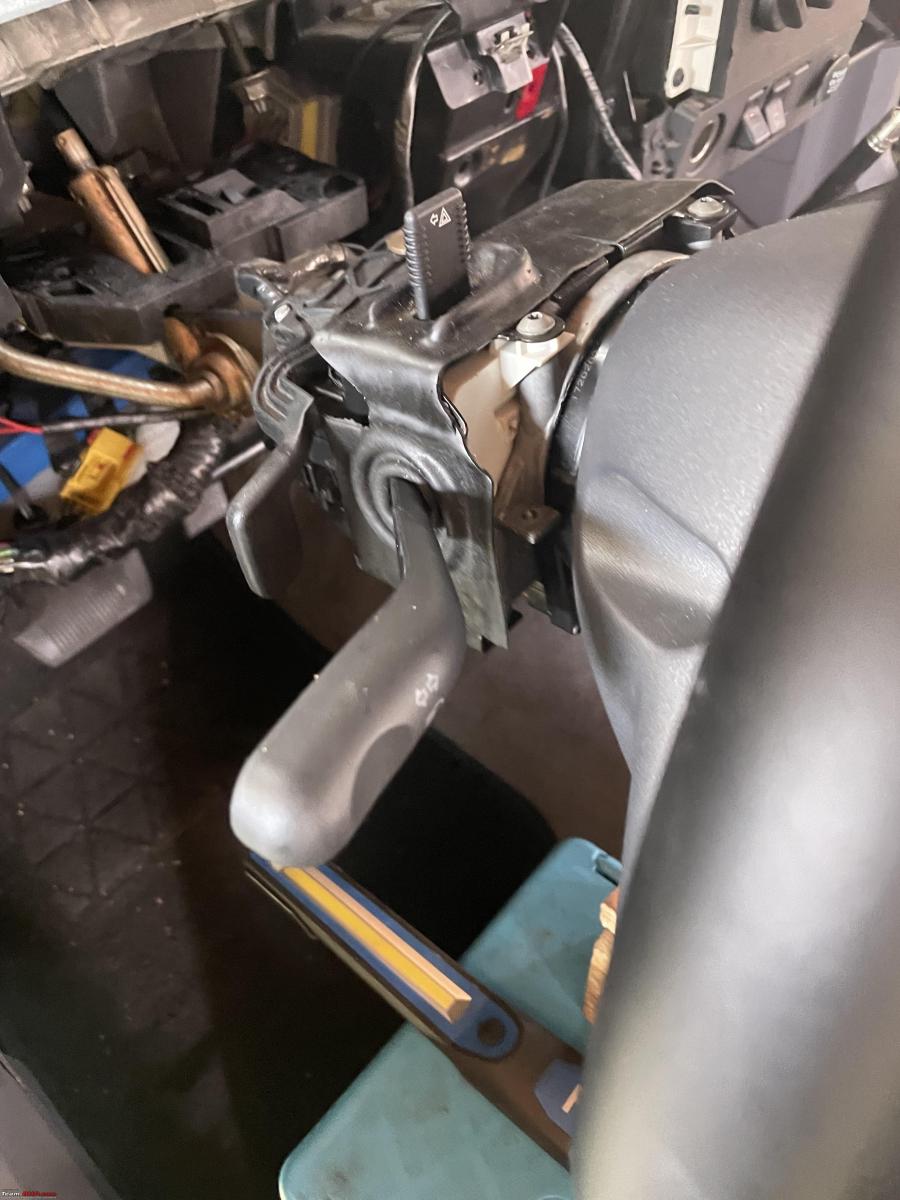 When I took out the instrumentation pod earlier, I opened the pod as well. Some of the small instrument backlight bulbs were blown. (It’s 18 or so I think). Replaced them all, for good measure. The door sills have these plastic pieces on top of them. So that you don’t scratch the paint. I noticed some rust in the paint near the edges of these plastic pieces. So I removed them all, took care of the rust, which meant running my wire brushes on it, cleaning it, some putty, and then spray painting it. The trim is held in place with the usual plastic trim bracket. I have three drawers full of them, but still not the right one. Had to get another type, also with its own little tool. 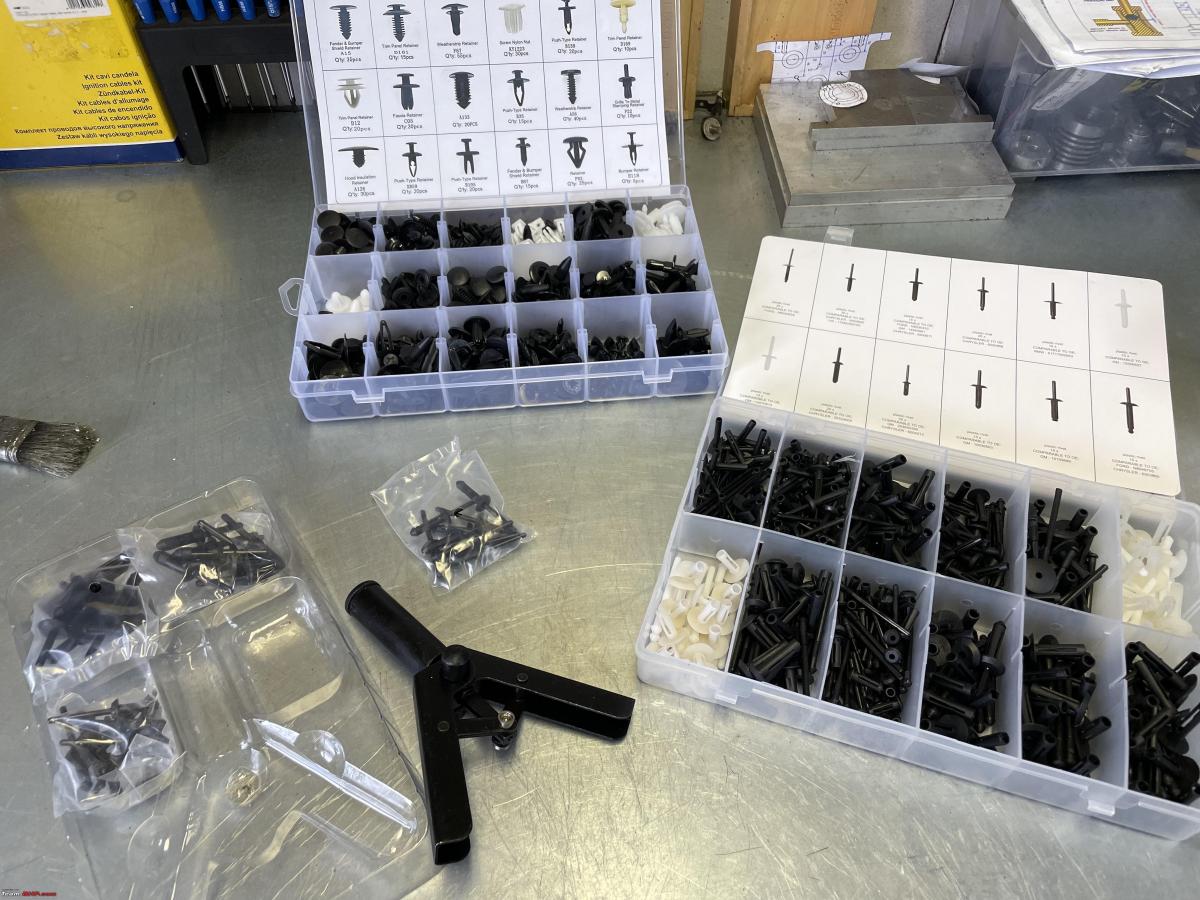 You may remember that on every car I have I install a battery quick disconnect. So I installed one on the Jeep as well. Very practical when you want to work on the car. No wrench needed, you just loosen the green knob a little. When Martin did the pre-MOT inspection on the Jeep, one of the items he found that would fail was the left light unit. Its reflex had become very dull. The right one was on the limit. I told him I would replace both. So I got two new original Hella units from Edwin at Jeepparts.

On the Jeep it is very easy to replace these units. It is in theory. You loosen a few 4-5 bolts and the whole grill panel falls out. Each unit is held in place by four screws that hold the chrome trim. Of course half of the screws were rusted, the other half just came off. So I had to spend a lot of time figuring it out.

This is what the old ones looked like on the outside. The inside was less corroded, but only marginally so! The grill itself had a problem as well. It never went well with the right front fender. It was a big gap. I investigated and had to use considerable force to hammer the inner part of the fender into place by about 8-10mm. Took about an hour and a half before I was happy with the new fit. Not perfect, but much better than before. Also, the mounting studs on the grill were in bad shape. Rusted and one had cracked. So I fixed it again with one of the special kits. Spend a lot of time polishing the chrome rings around the light unit. Of course with Autosol, your trusted chrome and metal polish for cars. They no longer sell under this name. I still have two tubes of the stuff! As I mentioned in my first post about the Jeep, the inside was pretty dirty. Family car with three children. And it turned out and I don’t think they were in the habit of cleaning and dirtying their cars. Disgusting, I can’t stand a dirty car. So I had already done some cleaning on the second day I owned the car. Couldn’t stand it. But it needed a proper deep cleaning in terms of the carpets and the seat. I wanted to rent one of these special “wet carpet vacuums”. They spray special cleaning liquid on the carpet/seats and then you vacuum it up.

But I needed at least three days with a decent temperature, lots of sun and preferably wind. Although these wet vacuum machines suck out a lot of moisture, some will always remain. You really need to get out of the car for a few days, doors and windows wide open, the sun shining and a nice breeze flowing through the car.

The night before I proceeded to take the back seat out and put it in the back of the Jeep. I also loosened all the bolts on the passenger seat and two of the four bolts on the driver’s seat. The next morning I picked up the wet vacuum with one of my other cars. Drove the jeep out of the garage and backed it into our drive towards the garden. Which means it faces south towards the sun. Took out all the seats. You can see the wet vacuum machine behind the jeep. A bit bare, but excellent for carpet cleaning. All seats out, for easy access and thorough cleaning. I found some rust (no surprise) on the driver’s seat mounting points. Dealt with the rust and sprayed it with some Hammerite. Same thing with the tailgate closing mechanism. Very rusty, not a pleasant sight when you open the tailgate. So much wire brushing, some putty and a proper Hammerite spray job. It was a lot of hard work to clean the carpets and the seat. Really backbreaking kind of job. I had to go over every square millimeter of carpet and seat several times. But very happy with the end result. Kind of hard to tell from these pictures and I don’t have any “before” pictures. But believe me the inside of this car was really disgusting. I also polished all the plastic parts as well. I had the Jeep out here for three days, in the sun, and everything opened up. Dried out quite nicely!

You might be wondering about the white license plate. Dutch plates are yellow. This is a special sign for when I tow a trailer. Any trailer weighing less than 750 kilos and without brakes is what we call an “unlicensed trailer”. It must have a white registration plate with the same registration as the towing vehicle. When you tow a trailer over 750 kilos with its own brakes, it comes with its own unique (yellow) license plate.

I’m still waiting for the cooler and other parts to arrive. Tomorrow I take the Jeep to Martin for the annual MOT. He will sort some things out too.

In the meantime, I also have to do some work on the spider. For the next 5 weeks, two trips are scheduled every 5 days or so. I will likely drive about 4000km or so. So I have to get Spider 100% sorted. It’s obviously in good shape, but there are always some things that need to be done.