Everything looks simple on paper. I was sure I could replace the stabilizer bushings in a day but I was wrong.

With a new car, a different make to my current cars, there is also a need to build my network of people who can help with parts, jobs and general advice and support.

The Jeep Cherokee is so far a very popular 4×4 in the United States. There are several excellent forums. I became a member of one of them in 2009 when we bought our Cherokee in Kansas City. After we sold it and left the US, I never visited it again, but my account was still active after all these years! Nice to be back on that forum too.

I find that by and large, if you need specific information about a particular car, the US forums are by far the best. Always lots of sensible advice, lots of people happy to help you. Americans have a unique way of handling cars. Many Americans, regardless of status, job, background, etc., work on their own cars. Some out of necessity to cut costs, but many just for fun, as a hobby.

Americans are very optimistic. There are never problems and challenges, only amazing opportunities. Always very refreshing to deal with them. Say, you post on the forum that you need to change the headlights. (As I did too). Someone will immediately answer: Fantastic! When you remove the grill to access the frame that holds the light reflectors, you might as well rip the engine out as well. Replace front and rear seals. Taking out the engine on a Sunday morning before the traditional family breakfast is a small change for the average American car enthusiast.

There are literally hundreds of Jeep Cherokee YouTube forums out there as well. Type Jeep Cherokee XJ steering box replacement and you will be presented with dozens of videos. I have seen many of these. Some of them are very good and I will refer to these, while describing the various jobs I have undertaken, will perform.

I also found a Dutch Jeep Cherokee forum. Very handy too. They helped me find some spare parts suppliers. Would you believe it, Jeepparts.nl is a 10 minute drive from us. Literally the next village.

I called them and spoke to the owner Edwin. Very nice guy, very knowledgeable. I have since visited him many times. Essentially, he runs a huge online Jeep parts store. But since I live so close to him, I can just call him and come over to pick up my parts.

I found spare parts in the Netherlands pretty good and pretty decent prices. Also, you can still get many parts in the US. Parts prices in the US are really, really cheap. Of course they have to be shipped, imported (4% import duty) and VAT (21%). Second, besides the prices, the number of different parts is staggering in the US compared to anywhere else. We will find that out during some of the jobs I have undertaken.

Edwin also connected me to another local business. Brinkman garage.

Same village as Jeepparts. They are basically an independent general garage. But they specialize in, among other things, Jeeps! Again, all of 10 minutes from where we were staying. I rocked up, apparently in my jeep, to talk to them. Met the owner Martin. Very nice, very professional and very knowledgeable about my Jeep. Martin will do some of the odd jobs I don’t want to do myself or can’t do. He will also help by doing a sort of Pre-MOT inspection, to see what I might have missed.

Finally, when working on cars you need all the documentation you can get. The previous owner had given me his Haynes manual:

The Haynes manuals are always extremely handy to have. I still have quite a collection of them. I had this one in Kansas City too. I also gave it to the guy who bought the jeep from me when we left KC. But Haynes just doesn’t have enough detail when you really need to dig in. So I always try to get the original workshop manual from the Manufacturer. I have them on all my current cars.

You can find a lot online. I have found these guys very helpful.

Yes, you tend to pay $15-25 for what is essentially a PDF file. But it is an excellent quality file. You can print individual pages, and they tend to be indexed too, making it much easier to look things up. They provide pretty good service as well. I had some problems with the file they sent me. Everything was arranged quickly and efficiently.

I sent the PDF file to my local print shop. I don’t like sitting behind computers for very long these days. I prefer printed material any day.

The Cherokee workshop manual is a whopping 2300 double-sided pages. The printer printed them and put them in three binders. I am very satisfied with the workshop manual. It is excellent. Probably the best manual I’ve ever seen. Very detailed, very well laid out, excellent drawings. Very pleased with it.

When it comes to work on a new car, I always start with everything that affects safety. So it’s usually tires (the current ones are fine), brakes, suspension, steering and checking the fuel lines.

It became very apparent, very quickly, that the brakes needed major work. The fuel lines are fine. Suspension and steering are all good, but all bushings in both stabilizer bars, front and rear, were gone. So I ordered all the brake and rubber components for the stabilizers from Edwin first. Some of the parts were on back order, so I had to wait a few days. But I bought a door hinge repair kit.

The hinges on the door on a Cherokee are welded to the chassis. The hinge mechanism itself is a very simple pin that holds the two parts of the hinge (chassis/door) together. The pin sits inside two bushings in the hinge. These bushes wear and thus the door begins to sag. They all do. I had the same problem with my Jeep in the US as well.

So time to rig up a small door hinge pin and bushing change. 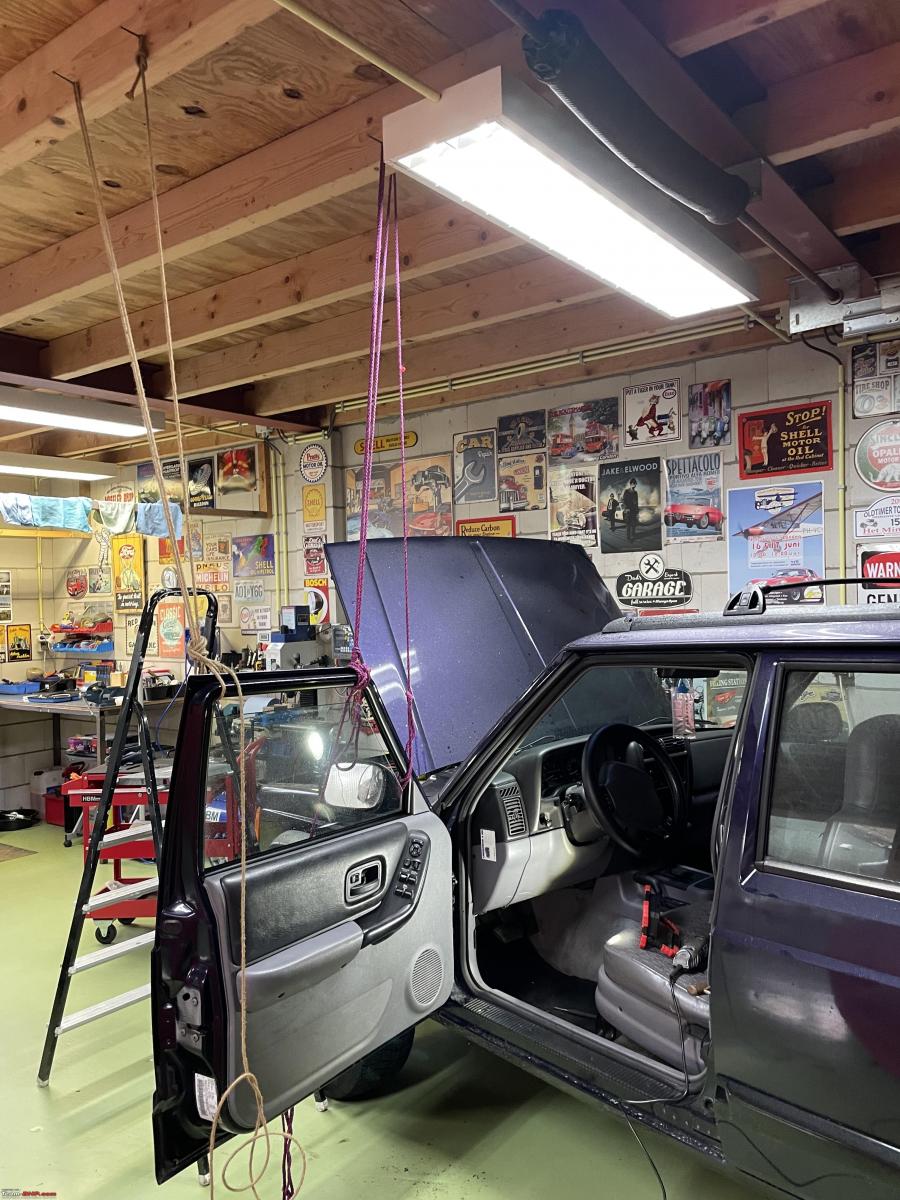 Here you can see the bushings on the hinge part still attached to the chassis. Getting the two pins out is a tough job. You have very limited access to get in there with one punch. I ended up grinding off the tops of the old pins with my little dremel.

Here the bushes are also removed. Replacing the two pins and four bushings on the driver’s door took me all afternoon. But as a result the door is completely straight now. No hanging, which also makes it easier to close.

The setup of the stabilizer bars on the Jeep is very simple, very traditional. Stabilizer bars minimize body roll. Well, at least that’s the idea, and of course they do, but even with perfect stabilizers, some cars will still handle a lot of body roll in corners. The Jeep is one of them. Still, without them, or with worn parts, it will be much worse. In addition to being inconvenient, it also affects handling, so it’s a safety aspect as well. Additionally, stabilizer bars, small as they are, tend to add to the overall structural integrity of the suspension setup.

In most cars, it is usually quite easy to replace the bushings on the stabilizer. There are at least two caveats; rust and stresses. Since these parts are not replaced very often, everything tends to rust. Assembling the bar can require putting some tension on it, which can be a real PITA for DIY mechanics like myself. Especially if you, like me, were on this job all by yourself.

Finally, as we’ll see, if they’ve been replaced before, you may have to put up with mistakes made by the previous mechanic.

The setup on the Jeep is very simple: As you’ve probably noticed, my garage, as spacious as it is, will only hold three cars at a time. I could cram four cars in, but the floor will collapse, it’s not strong enough.

I did a special deal with the insurance company, this is a YoungTimer, it’s supposed to be in a garage, but mine can live outside 24/7. So when I work on the Jeep I have to shuffle my cars around. If the jaguar for a project of more than one day is moved to a friend of mine, further up the embankment. He has plenty of storage space, so I leave my Jaguar with him while I can take the Jeep apart.

I was sure I could replace the stabilizer bushings in a day, so I just drove the Jaguar in and put it on some axle stands. Of course I was wrong! On paper, everything is very simple! It’s literally loosening a few bolts and nuts and that’s it. I always spray penetrating oil on all bolts and nuts the night before. Really soak them. Works really well.

On the front, everything was very simple. As you will see, definitely worn: Since the bar and brackets were all very rusty, I decided to clean them with my pneumatic wire brush and give them three coats of Hammerite paint.

Next day I’ll tackle the back ones, so pop in for easy access: But it became immediately apparent that there was a problem: I couldn’t remove the bolt holding the mount in place. If you refer to the drawing you will notice that the bolt should have been inserted from the other side. I suspect they had the entire rear axle off and installed these brackets first, before installing the leaf springs. Removing the springs was too much of a job, so I decided to just cut the bolt off and get a new one. You may also have noticed that the end of the stabilizer bar is badly corroded and worn thin. New bushes wouldn’t do. And of course the old bushes were really worn: So I called Edwin from Jeepparts.nl. He didn’t have a new bar, but he had a decent second hand. So I decided to take it up. Cleaned everything and resprayed it. The installation went quite smoothly.

If anything, it all looks a lot smarter! Freshly painted used bar, new bushings, new fat, new linkage too! We are good to go. But to stop, you need good, safe brakes. Boy, did mine need a serious look too!