Just north of Scottsdale, Arizona, the woman in the Mercedes G-Wagen is honking and waving her arms. She lowers her tinted window and calls out, “Is that the new Hummer?” Yes it is. After being absent for more than a decade, Hummer has reemerged as a futuristic, all-electric behemoth that comes in both pickup and SUV form.

The tough car of the 1990s and early 2000s, the old Hummer was the ultimate symbol of gas-guzzling, conspicuous consumption. In 2009, General Motors retired the Hummer brand in the aftermath of the previous year’s economic downturn. Now filed under the GMC nameplate, the new Hummer is poised to make a spectacular comeback thanks to its soulful design, greener powertrain and legitimate off-road capability.

“We want to get people excited about what an electric car can be,” says a GMC spokesperson during our test drive in Arizona. The Hummer EV is the first vehicle built on General Motors’ Ultium platform, which is powered by a giant 24-module battery pack that offers 329 miles of range. In the platform’s most powerful configuration, one front and two rear engines provide a total of 1,000 hp. In launch control mode, which GMC calls “Watts to Freedom” (WTF), the Hummer EV can accelerate from zero to 60 mph in about 3 seconds.

Designers and engineers had just about 18 months to come up with a prototype after General Motors president Mark Reuss asked his team to build a rugged utility vehicle that would propel the company into the future with its all-new electric powertrain. A passionate group came together to create the model, including hardcore off-roading and overlanding enthusiasts as well as members of GM’s performance team. The result is nothing short of impressive. 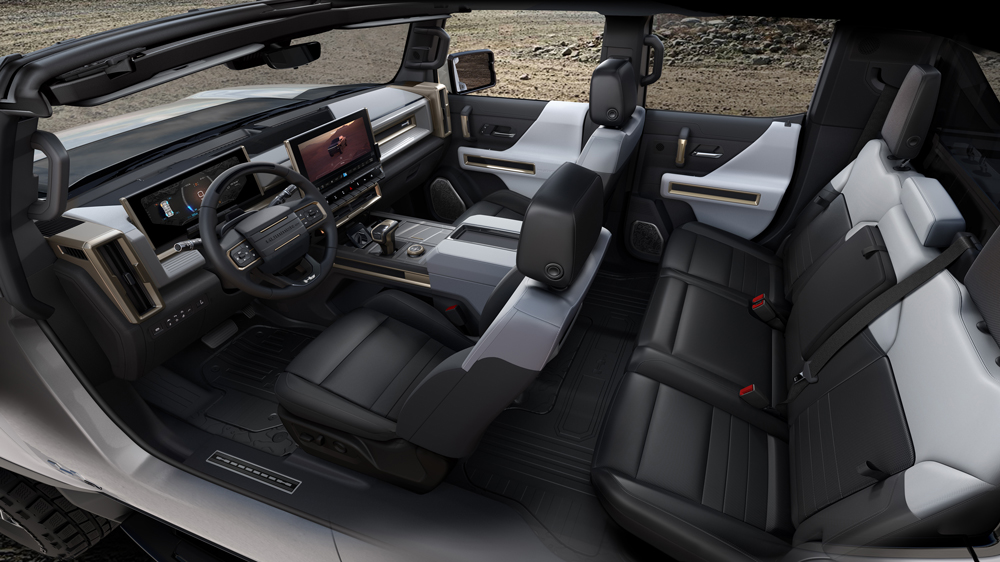 Up to five passengers can be part of any Hummer EV expedition.

Although it weighs more than 9,000 pounds (nearly 3,000 pounds of which comes from the battery pack), the Hummer EV is anything but sluggish. Thanks to the instant torque from the electric motors, the vehicle is quick off the line. Adaptive Cruise Control uses countless sensors to read the road every two milliseconds, and adjusts the suspension accordingly for the smoothest ride. And with the optional four-wheel steering, the turning circle is reduced from 44.3 feet to just 37.1 feet, making the Hummer surprisingly nimble when navigating narrow outback terrain or supermarket parking lots. 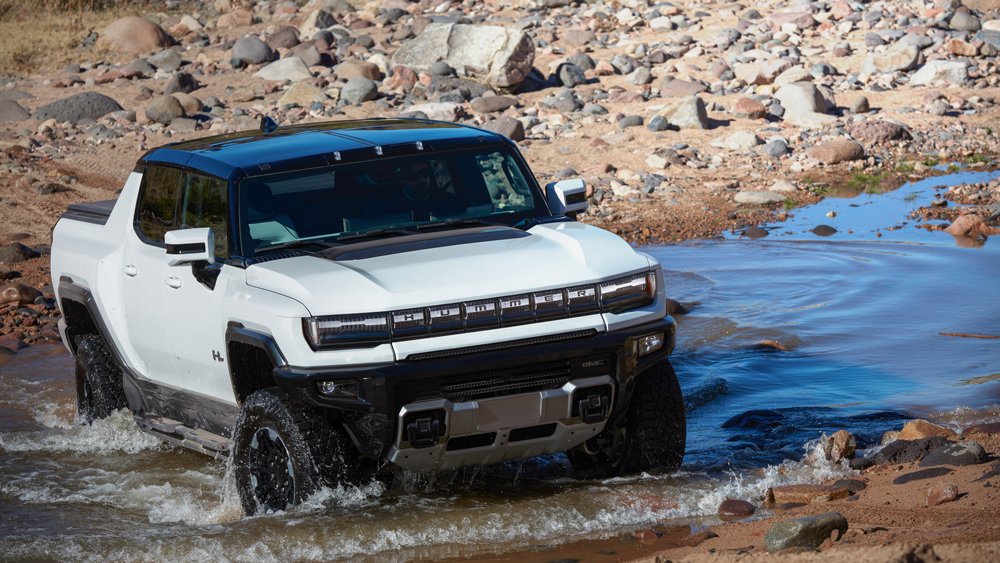 In off-road mode, the vehicle has 12 inches of ground clearance for climbing rocks and traversing water as much as two feet deep.

Heading to an off-road location north of Scottsdale, we engage GM’s latest version of Super Cruise, a driver assistance system that’s one of the best in the business. It combines adaptive cruise control, steering assist and lane centering functionality to provide an almost autonomous driving experience, as long as the driver’s eyes are on the road. If you’re traveling any part of the 200,000 miles of enabled roads, a new lane change feature will detect if a car in front is slowing down and check the left side for traffic. If everything is ready, the Super Cruise will make a lane change, pass the slower car and get back automatically. And the lady in the G-Wagen is far from the only fan. From the freeway to suburban stoplights, drivers of nearly every giant pickup truck give us a big thumbs up—or aggressively cut us off in an obvious show of insecurity. 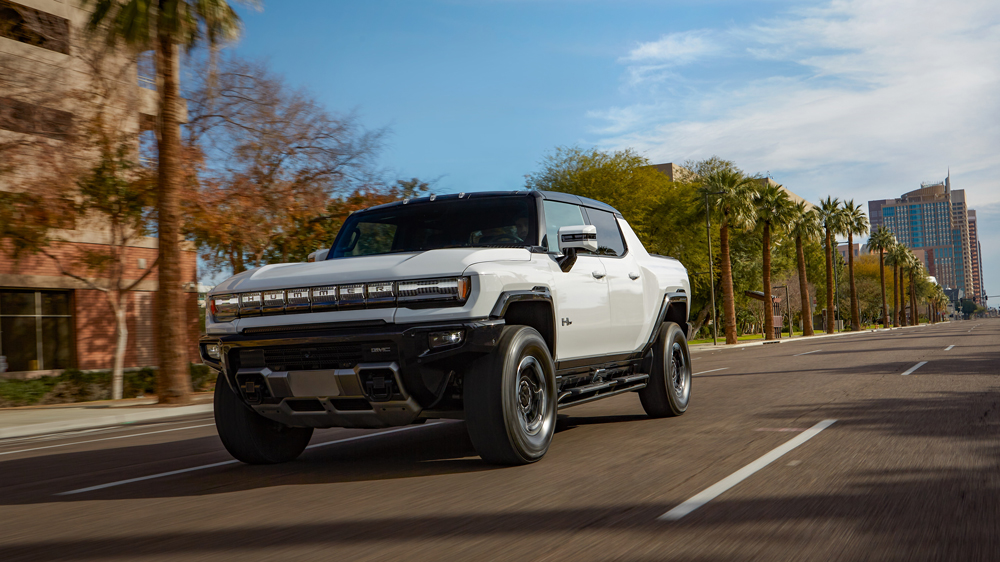 As with G-Wagens, Range Rovers and other rugged vehicles that have become fashion statements, most of these Hummer EVs will never taste dirt in the backcountry. But the model is one of the most capable and versatile for outdoor use – as long as you have enough charging. Two main modes handle more adventurous driving: Off-Road mode is for relatively higher speeds, over dirt and gravel, while Off-Road mode is for slower, more technical routes, with the electric powertrain’s one-pedal operation acting as hill-descent control of sorts. In this mode, the Hummer offers nearly 12 inches of ground clearance for climbing rocks and fording streams. And should the driver run into trouble, the optional “Extract” mode will raise the vehicle to a maximum of 15.9 inches. 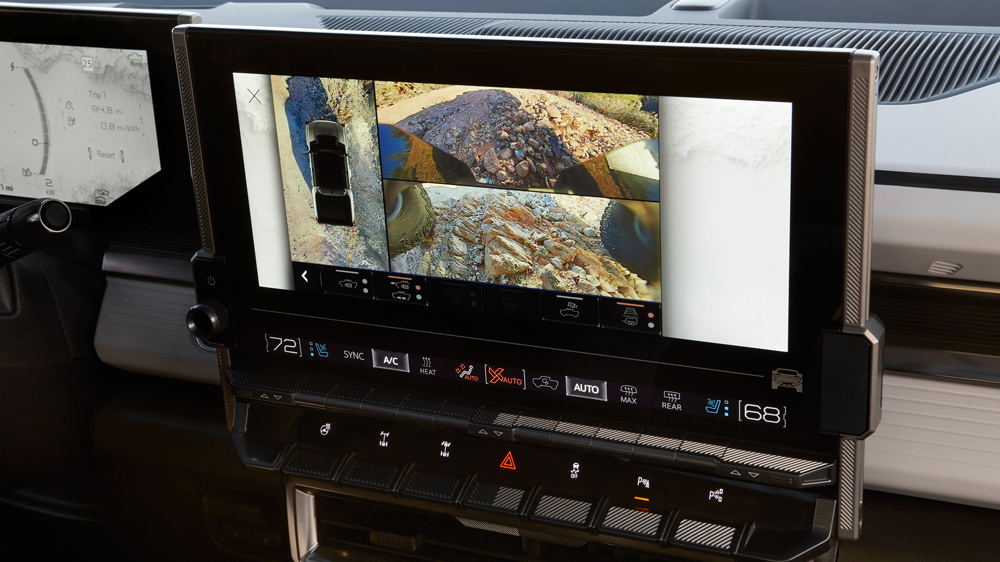 A total of 18 individual camera views, including under the truck, can be displayed.

Ski plates, sliders and side steps completely protect the battery and the bottom of the car. And if you get stuck in tight conditions, the “Crab Walk” feature turns the rear wheels up to 10 degrees at the same angle as the front wheels, allowing you to diagonally crawl your way out of a sticky situation. Multiple camera angles and a 360-degree overhead view ensure you can see exactly where you’re going and where to put tires on the trail.

With the Hummer’s unique four-wheel drive system, it can climb 60 percent grades—both forward and backward—scale 18-inch verticals and traverse water two feet deep. And while we didn’t need it on our test drive, a virtual locking rear differential varies the amount of torque sent to each wheel to optimize grip and improve road handling. 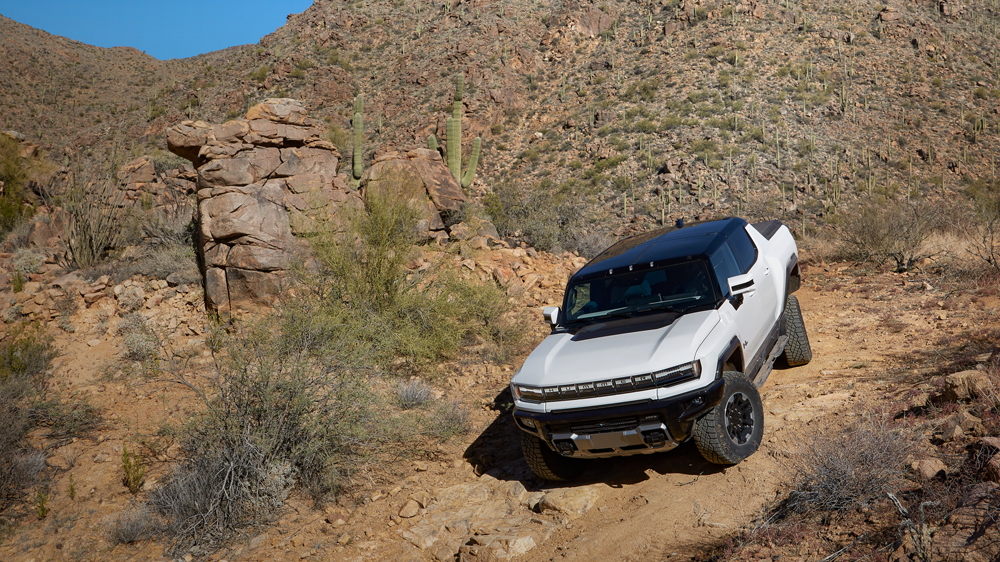 Ski plates, sliders and side steps completely protect the battery and the bottom of the car.

When it came time to design the new Hummer, the United States was celebrating the 50th anniversary of Apollo 11, the rocket that sent the first man to the moon. That milestone inspired designers to use many space-related themes in the first version, called Edition 1. These range from Interstellar White exterior paint to small moon-boot prints hidden around the cabin. The 13.4-inch center touchscreen is easy to read and intuitive. The graphics are powered by Epic Games’ Unreal Engine (a 3D creation tool originally developed for video games). The instrument cluster in front of the driver offers five layouts to choose from: Lunar, Sport, Clean, Off Road and Digital, with different colors and topography for each. A combination of textured analog buttons and digital controls make the Hummer look modern while remaining practical, especially when navigating around rocks and ruts. 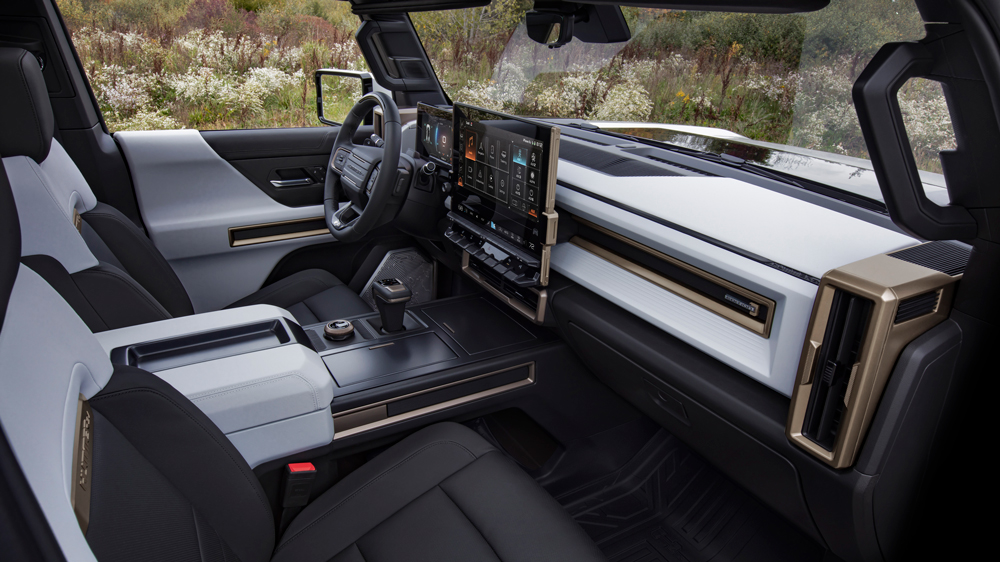 The 13.4-inch center touchscreen is easy to read, and the instrument cluster offers five layouts to choose from.

Reservations are full for the Hummer EV Edition 1, which starts at $110,295 and is equipped with the most capable off-road features, a removable transparent roof and a towing capacity of up to 7,500 pounds. But now reservations are open for the 830 hp Hummer EV 3X, which is expected to be available this fall. Two less powerful, twin-engine variants are expected in the spring of 2023 and 2024, respectively. And if you decide to join anxious soon-to-be Hummer owners, get ready for a truckload of attention.