Jeep has a following that most car brands could only dream of.

It has it such such a loyal following, in fact, that each year around 50,000 owners head to Moab, Utah for the Easter Jeep Safari.

Currently running and ending on Sunday (April 17), it was set up by fans rather than Jeep itself, but in recent years the American 4×4 company has fully got on board with it, showing off a range of concept cars every year to ignite further passion for their products.

Some are just a designer’s imagination gone wild, while others are closer to what you might see in production.

For 2022, Jeep has revealed the most concepts yet, with many of the models focusing specifically on electrification. 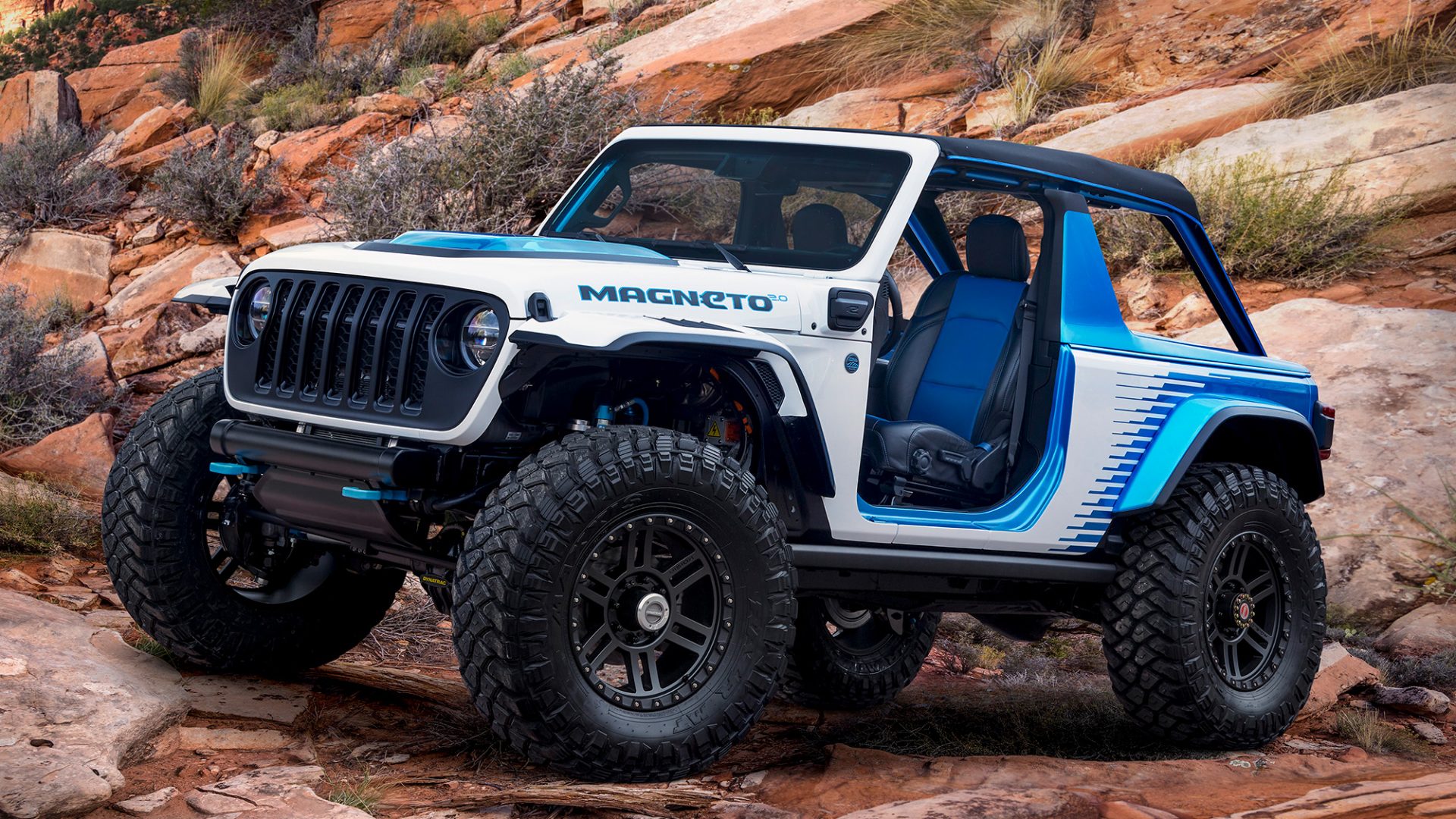 At last year’s Easter Safari, Jeep showed off an all-electric version of the Wrangle – dubbed the Magneto Concept – and while the company said it initially came up with the idea for “fun”, a production version is looking increasingly plausible.

For 2022, Jeep has revealed a second version, which boasts significantly more performance, with power rising from 281bhp to 616bhp and torque growing from 370Nm to a whopping 1,150Nm.

While the company hasn’t been able to fully test it, Magneto’s designers say a sub-three-second 0-60 mph time should be possible.

It also uses a six-speed manual transmission to control the electric motor, while Jeep has extended the wheelbase of the two-door Wrangler by 12 inches to squeeze in the powertrain.

When it comes to the standard Wrangler you can walk into a Jeep showroom and buy, the Rubicon is the most extreme version – with a range of tweaks to make it even more off-road capable.

And since it’s been 20 years since the original Wrangler Rubicon was launched, Jeep is celebrating with an anniversary concept.

Based on the ‘392’ version (not sold in the UK), it uses a huge 6.4-litre V8 engine and comes with a dual-mode performance exhaust system, custom-built half doors and a matte gray vinyl wrap contrasting with a gold towbar and badge.

A lift kit is also fitted to further raise the ride height, while a Warn winch and 37-inch off-road tires round out the changes. 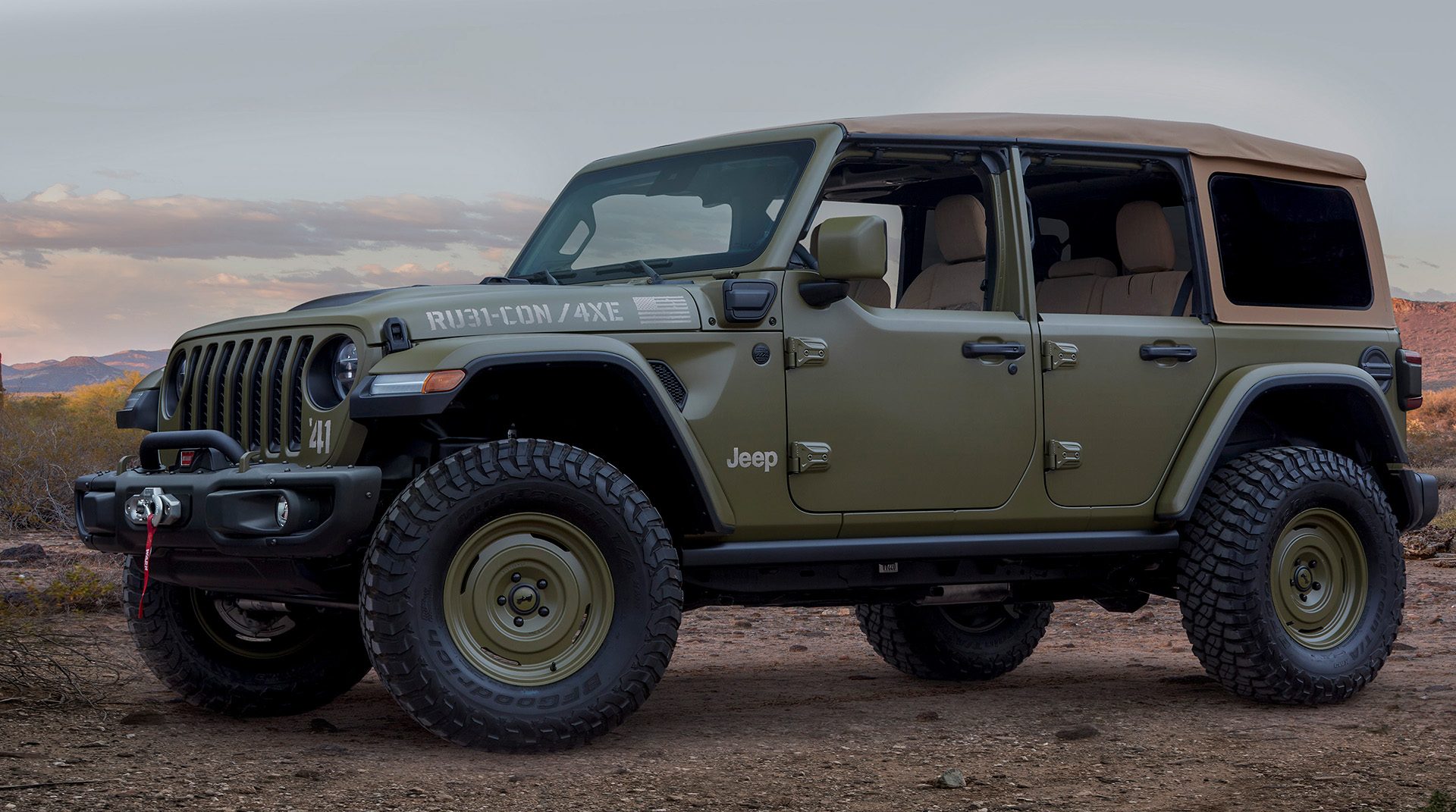 Heritage is hugely important to Jeep, with its origins tracing back to the original Willys Jeep that aided in the Second World War efforts.

The number ’41’ refers to the year the brand was founded, with this concept paying homage to the original with its matte green exterior finish, black powder-coated steel bumpers and khaki soft top.

Custom stencils, a retro shifter, canvas-covered seats and matte green wheels round out the changes, which Jeep says make it “fit for a five-star general.”

A modern twist on the ’41 concept, however, is the fact that it uses the new 4xe plug-in hybrid powertrain already found on Wranglers in the US, offering electric driving for 21 miles. 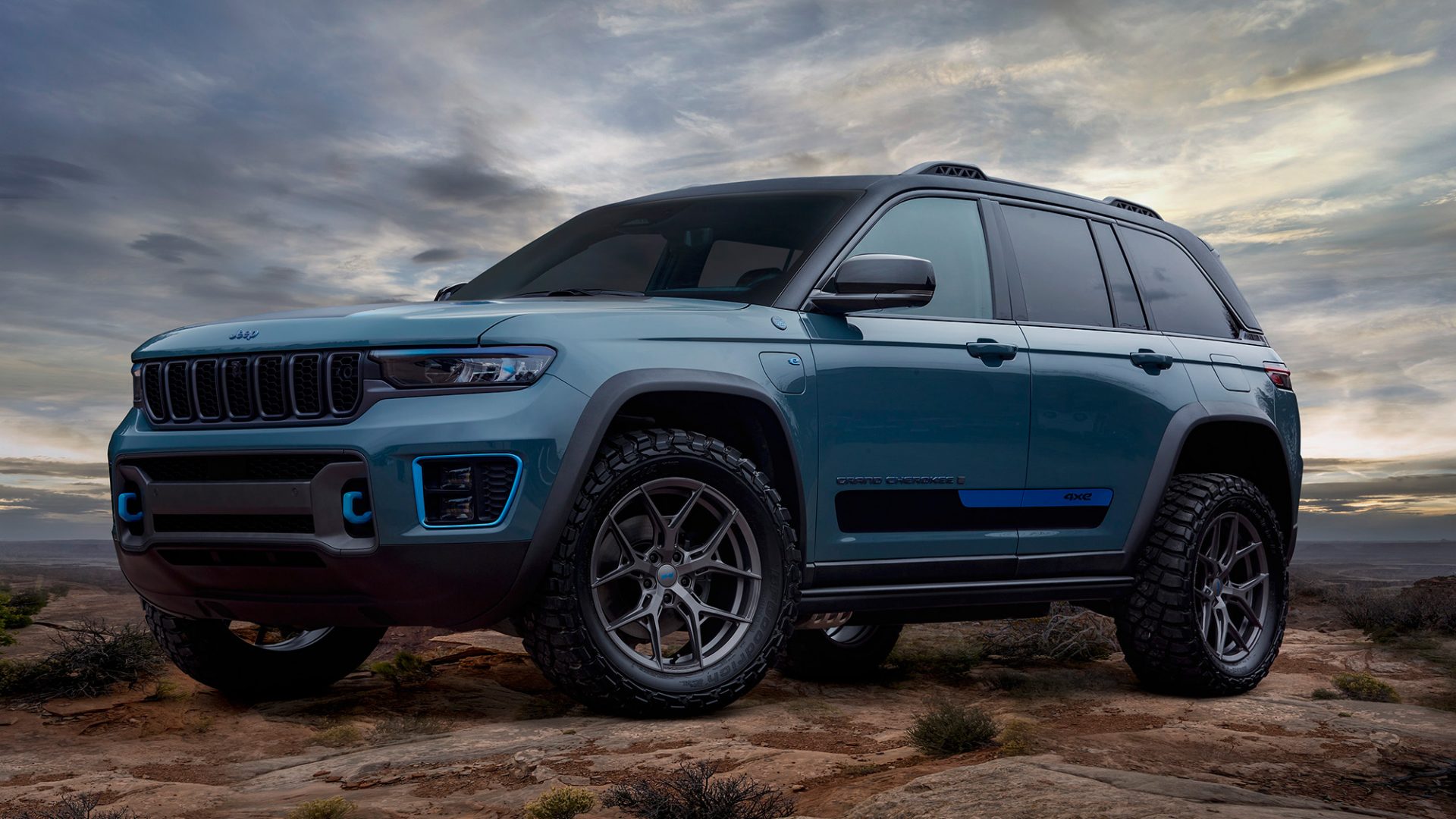 You’ll notice that the vast majority of these concepts focus on the Wrangler, which remains Jeep’s most iconic model and the one with a particularly strong following.

But Jeep is also turning the spotlight on its new Grand Cherokee 4xe — a plug-in hybrid SUV that serves as its flagship — with a new Trailhawk concept that will likely continue to inspire future production models.

Highlights include a class-exclusive sway bar disconnect that allows for better wheel articulation and traction over rocks and rough terrain, while custom 20-inch alloys are wrapped in 33-inch mud tires, along with widened wheel arches.

This concept also comes painted in a cool industrial blue, with matte decals and a custom roof rack.

Even the top half of the car is painted in a durable black liner finish, which allows you to load things like Christmas trees and kayaks onto the roof rack without risking damage to the paint. 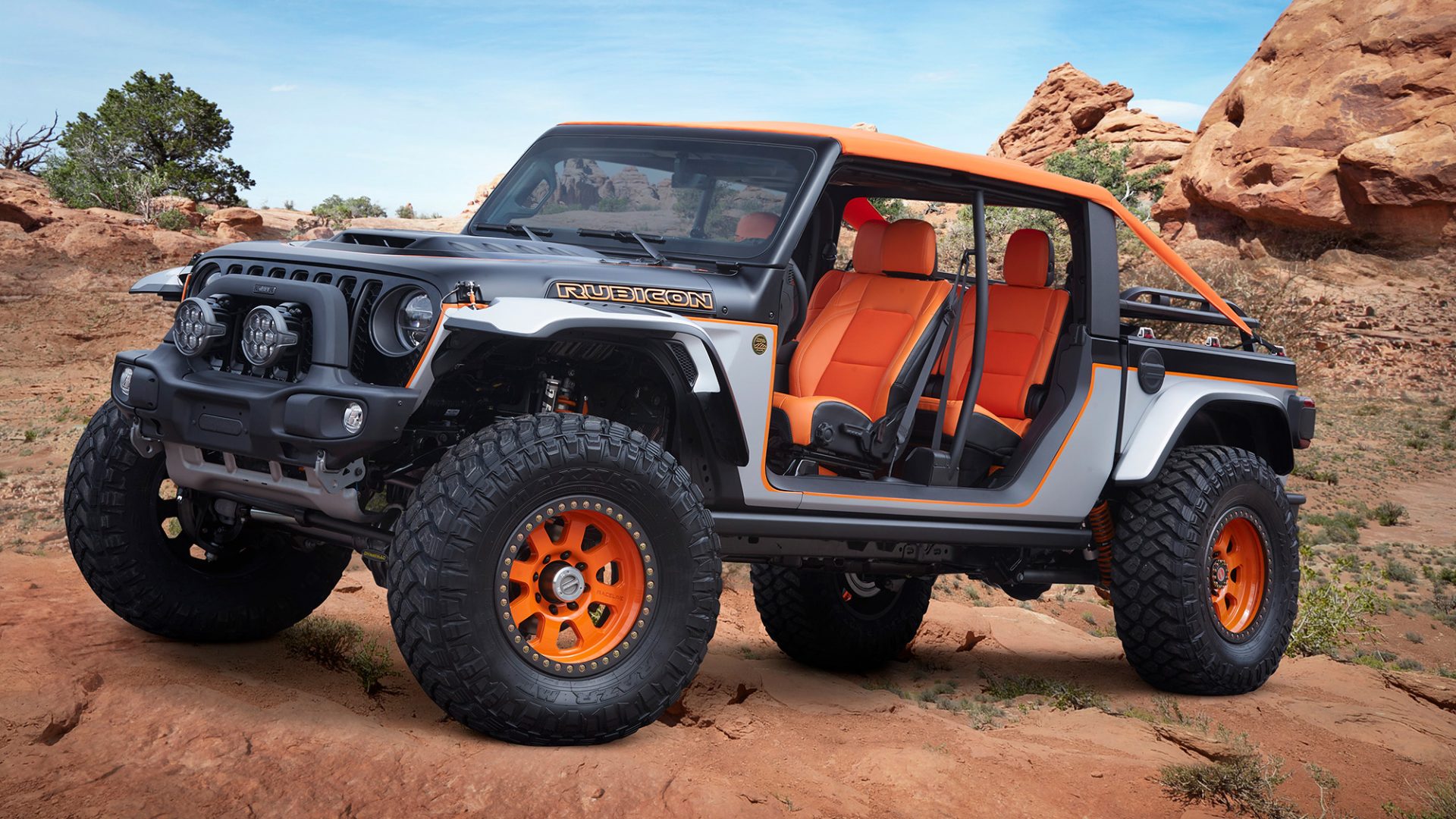 Known simply as the ‘Bob’, this concept is a cross between Jeep’s Wrangler and Gladiator pickups, with its name referring to the ‘bobbing’ (or shortening) of the long rear overhang.

All four of the Gladiator’s doors and B-pillars have been removed for “ultimate open-air freedom”, while a bespoke hardtop has been perforated, with canvas applied to provide protection while letting in plenty of natural light.

The Bob also comes with a three-inch lift kit and custom off-road suspension provided by industry leaders, with a contrasting gloss and matte color scheme adding even more style. 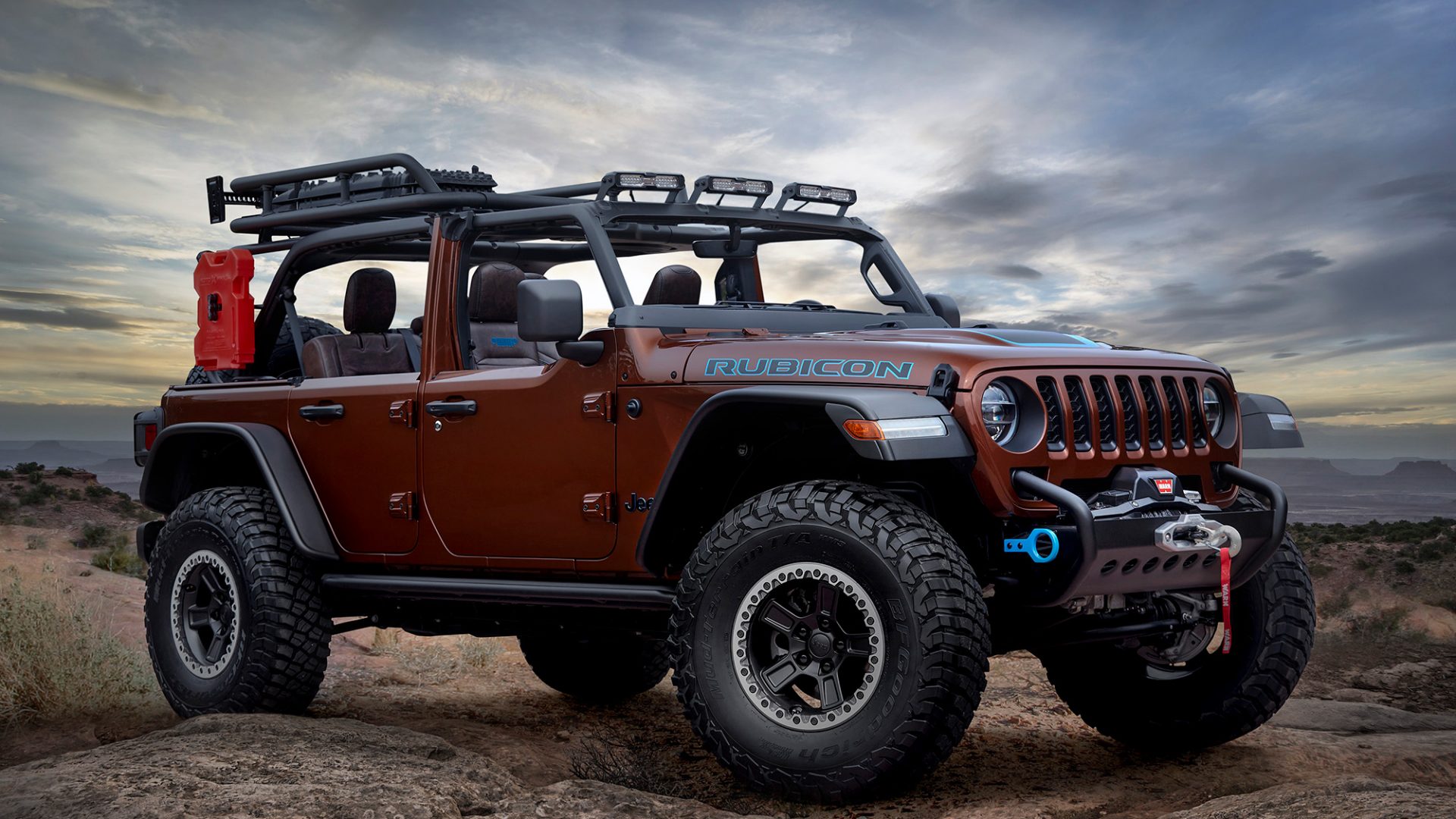 The Birdcage is a model created by Mopar – the Stellantis-owned parts, service and customer care division that provides a range of aftermarket supplies for Jeeps – and it showcases a number of elements from JPP (Jeep Performance Parts).

Designed to be a “wide-open-air extreme 4×4 machine”, this model is also based on the 4xe plug-in hybrid Wrangler.

Jeep worked to improve the approach angle of the standard car with a custom rock-slider skid plate, which protects the winch and is positioned for improved rock-crawling performance.

Even the windscreen has been removed, while distinctive ‘Tobacco Leaf and Cocoa Brown’ leather seats are a unique touch, with the entire interior designed to be washed down when it gets muddy. 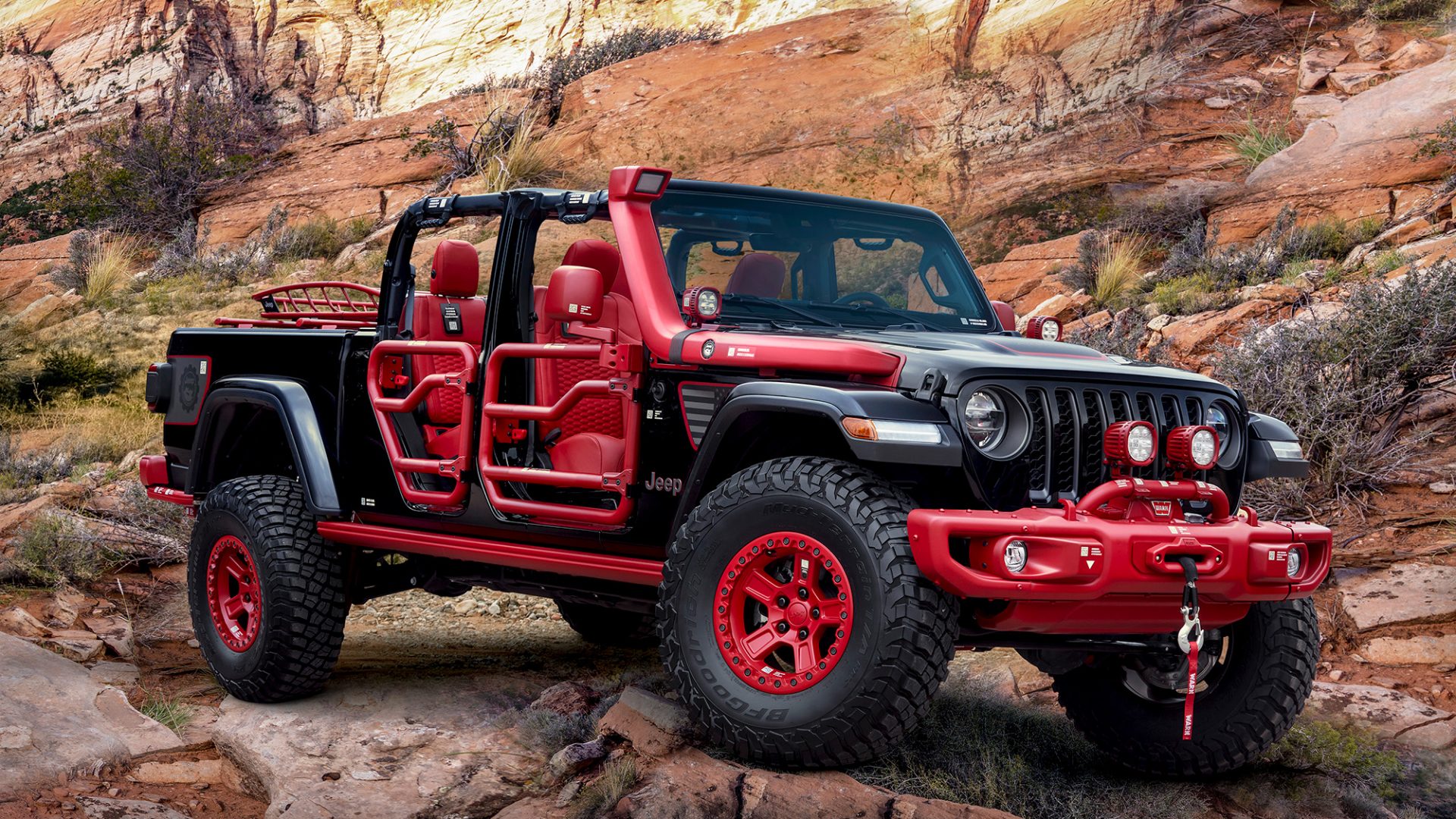 One of Jeep’s most interesting concepts in 2022 is the D-Coder, which has also been created by Mopar.

Essentially, all aspects of the D-code that are painted red are extras that Mopar can deliver to Wrangler owners, with each part having a QR code on it that can be scanned, taking a customer directly to the page where they can learn more or buy the accessory for themselves.

Just a few of the features Mopar can provide include custom Katzkin leather upholstery, mesh sun visors, and Gorilla Glass, which is three times as strong as glass typically fitted.