I have to admit that I really like the name Jeep Meridian. It’s consistent with Jeep’s geography-based nomenclature (like the compass), and means more than just that. The word meridian is versatile and can be used synonymously with zenith, zenith, summit and peak. We were invited to take the soon-to-be-launched Meridian for a drive around Punjab, Haryana and Uttar Pradesh, to find out which aspects of Jeep’s new seven-seater SUV live up to the name. Since it was a Jeep, the obligatory off-road track was also arranged.

When I first saw the meridian in the flesh, it looked much larger than the compass, especially around the middle. Yes, it’s 364mm longer, 41mm wider, 58mm taller and has a wheelbase that’s 146mm longer, but the stretched seven-slat grille and narrower headlights give the impression that it’s much wider. It’s a neat look at what is essentially an elongated compass. It’s also quite noticeable that there’s quite a bit of length behind the rear wheel, but – as with the compass – my OCD kicked in when I saw that the rear wheel and wheel well weren’t aligned. 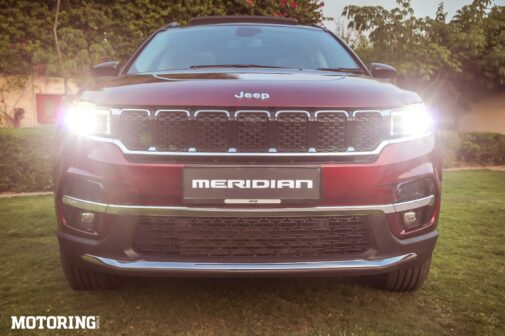 Like others of its ilk (three-row derivatives of five-seat SUVs), the Compass and Meridian can be mistaken for each other in the dark, but when the lights come on, you’ll definitely know which is which. The rear styling is also unique to the Meridian, with narrower lamps linked by a chrome strip, again helping to accentuate its width. The new 18-inch alloys also provide more separation between the smaller Jeep and the seven-seat version. Overall, the Meridian, like the Compass, looks solid, well put together and rugged, while being more urban than the Wrangler. 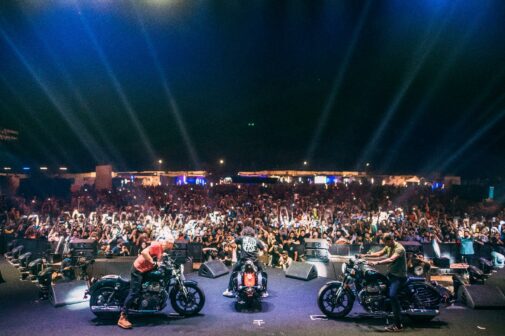 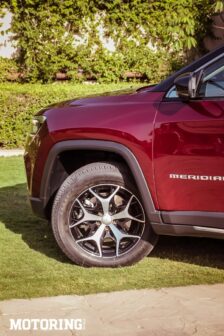 Those familiar with the compass will feel right at home in the Meridian. The lighter brown tones used on the dash and on the seats definitely help brighten up the cabin, and the space inside is bigger. The inside feels even more spacious thanks to the large panoramic sunroof, and then there is an extra row of seats. You climb into them at the touch of a button and fold down the 60:40 split rear bench (a six-seat version with captain’s seats could also be on the cards), although not many will find the third row useful. 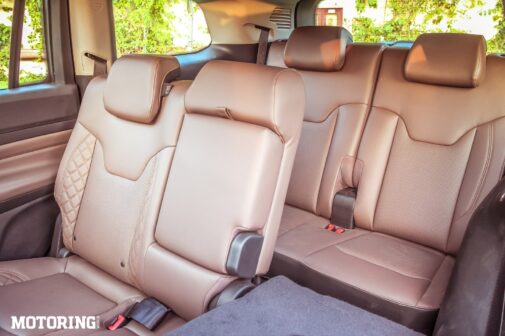 They are best for children on short trips, or folded to make room for more luggage. Despite the increase in width across the compass, the Meridian won’t seat three in the back with that much more comfort, making it best for two passengers. Still, the two on the middle bench – although on the taller and larger side – will be very comfortable, even over long distances. At the same time, I thought the driver’s seats were the best place to be. It is adjustable in eight ways, comes with ventilation and provides excellent support. 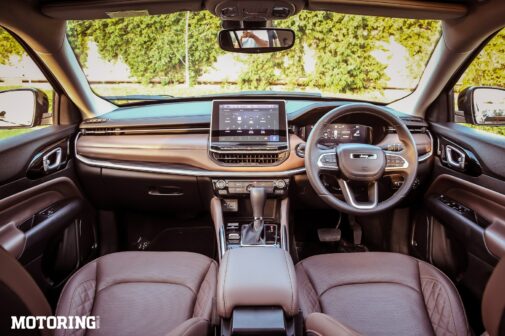 Equipment is more or less the same as the Compass, you get wireless charging, the smart 10.1-inch infotainment system with wireless Apple CarPlay and Android Auto, a 360-degree camera that has a sharp screen (and is very useful when you’re off). roading), and a customizable 10.25-inch digital instrument cluster. The power tailgate is quite useful, especially when the rear seats are folded down to make around 480 liters of boot space. Safety kit, from tire pressure monitor and six airbags to hill control and electric parking brake. 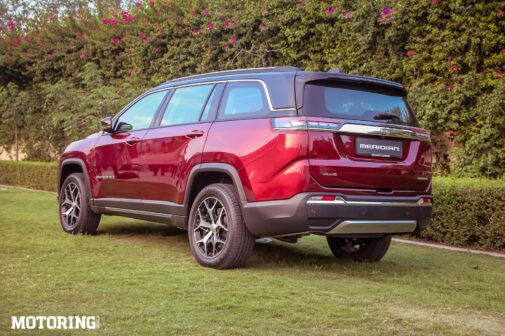 Along with the increase in size compared to the Compass, there is a corresponding increase in weight – a little more than 100kg – which makes the engine output somewhat disappointing. The Meridian uses the same 2.0-litre four-cylinder turbodiesel engine, which produces 168bhp and 35.69kgm of torque, albeit recalibrated. The larger Jeep feels slower, and that feeling is accentuated by the slow-shifting 9-speed gearbox. With only two people in the SUV there isn’t much of a difference but load it up and you’ll be able to tell the Meridian fight a bit. 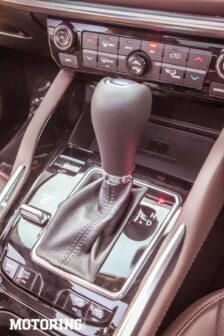 This makes driving exuberant business, but drive it lightly and the Meridian is a capable highway cruiser and not as difficult in traffic as its nearly 4.8m length would suggest. And that’s a real shame considering how dynamic this big SUV is. It smothers bad roads with great confidence, and body roll is well mitigated too. The fully independent suspension setup works brilliantly on the road, even better than on the Compass, where you can feel a hint of stiffness at lower speeds, and the chassis remains stiff. 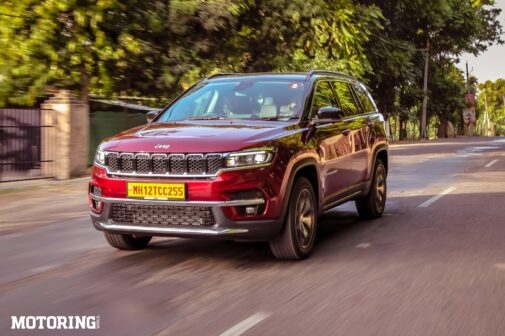 Pushing this long SUV into a corner is almost enjoyable, and you’ll have no problem weaving through slower trucks on the streets as the direct steering also adds even more confidence. If it weren’t for the sluggish gearbox, and the relative lack of power, I’d dare to call the Meridian fun on the road. But it’s off the beaten track where this seven-seat SUV really shines. Jeep had a grueling off-road course for us to experience what the Meridian can do and, I must say, this is another real Jeep. 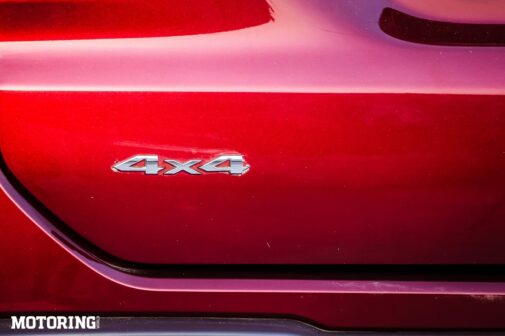 The Meridian is adept at crawling up stairs, having two wheels in the air over massive ruts, climbing up and down steep slopes, and wading through waist-deep water and dirt. I’m not an off-road veteran by any margin, but some of the things I managed to pull off, like turning almost 90 degrees down a 60-degree descent on what is essentially earth, were done so with an ease and poise I hadn’t expected . I guess I shouldn’t be surprised given the brand and its amazing 4×4 system, but I was. 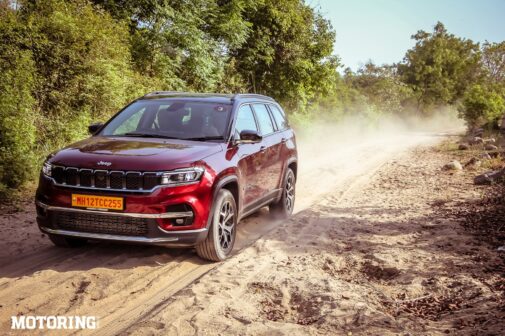 It was only in the sand pit that a specific mode needed to be activated, and only once did I have to put it in 4×4 low, and that was due to my lack of experience in maintaining speed on an uphill. Just leave it in Auto and watch the Meridian trapezoid across an entire track. I know not many of its buyers will end up using it this way, but it’s nice to know that no matter what Jeep you buy, it will be a Jeep through and through. 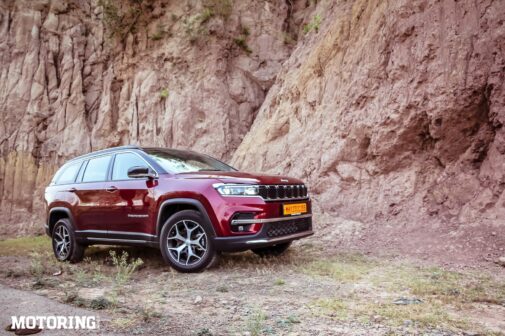 Based on the Rs 29.9 lakh, ex-showroom, India, starting price, it seems the Meridian will follow in the successful footsteps of the Compass. The sub-Rs 30 lakh price tag means it will undercut the likes of Toyota Fortuner and Skoda Kodiaq and even the top-spec Limited (O) 4×4 variant’s Rs 36.9 lakh price tag is quite competitive for the segment. Jeep says it has achieved 82 percent localization at its Ranjangaon plant near Pune, which has helped keep costs in check. The Meridian appears to be an excellent option for those looking for a strong-looking, off-road family SUV.