Jeep will reintroduce the Grand Cherokee in India this month and we tell you what the new fifth generation SUV is all about and how it drives.

Fall. That time of year in North America when the trees provide a feast of color. Bright yellows, burnt oranges, dark reds and deep purples, all set against an inky blue sky. The colors are here because the maples, aspens, chestnuts and oaks strip the chlorophyll from their leaves and let them “fall” before the snow. This creates a spectacular backdrop. We’re here to drive the all-new Jeep Grand Cherokee, an SUV that Jeep India will assemble and re-introduce here this month.

Now in its fifth generation, the new Grand Cherokee has grown and progressed in several directions. First, the new car looks bigger. And with its new flat hood, long lines and a bigger boot, it looks more grown-up too. In addition, the new Grand Cherokee is built on a completely new platform that makes it easier to integrate all kinds of modern technology; things like a plug-in hybrid system, multiple screens, connected technology and electronic driver aids. The biggest upgrade, however, is on the inside. The new Grand Cherokee, says Jeep, is now fully equipped as a luxury car. Yes, the rugged, almost indestructible feel has been left intact, but the new Grand Cherokee also brings a whole new level of fit, finish and material quality.

This is actually something I notice right away. The upgrade in interior quality is so good, in fact, that I’m unconsciously running my fingers across the dashboard, along the leather seats and down the center console. The waterfall-like arrangement of the central screen with the piano black surround is beautifully done, and I just love how the chunky chrome pieces light up the cabin. Jeep didn’t exaggerate; this really is a huge leap in quality and just what the doctor ordered.

Clearly more exclusive and built from better materials; the cabin is both very functional and well equipped.

I stop to take some pictures shortly after I collect the car; the trees are just too amazing. But once I’m done I’ll be back to take a closer look at the cottage. Have to say that the way in which Jeep’s designers have “sculpted” the dashboard is really impressive. Particularly appealing is the way the wooden panel meanders from one door plate to the next, twisting like a fat ribbon. The chrome strip, or ‘wing’, that runs across it also adds shape, while the padded leather sections with contrasting double stitching add a plush feel too.

Interspersed in this complex mélange are a multitude of screens. The dashboard is a screen; Of course, you have a high-resolution and responsive central 10.1-inch screen, and the Grand Cherokee also has a segment-unique passenger display. The latter does practically everything the main screen can do, and the front passenger can even stream content without disturbing the driver; the screen has a privacy filter that makes it invisible to the driver. 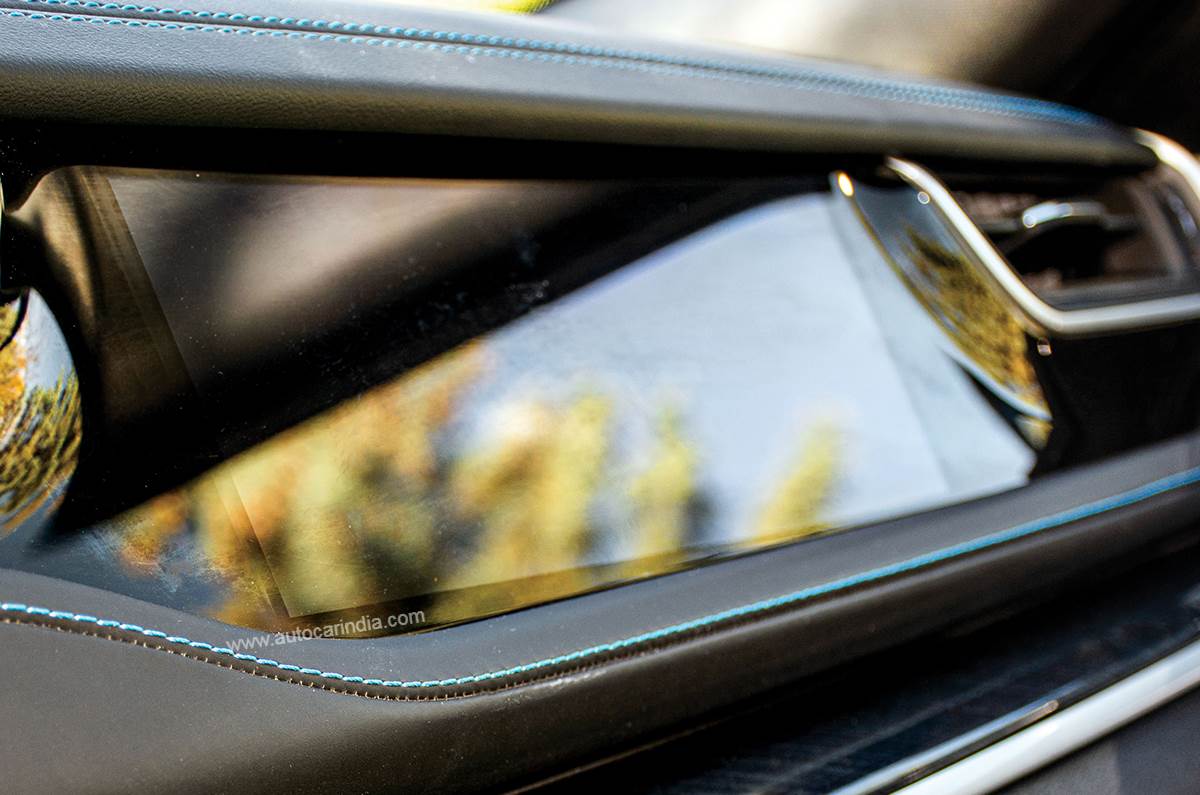 Jeep hasn’t gone all digital, though, and thankfully so. There are still plenty of expensive buttons and switches scattered liberally around the center console. For example, the air conditioning controls work via buttons and paddles, you have physical controls for the four-wheel drive system, and there’s an interesting array of buttons that sit atop the central display. 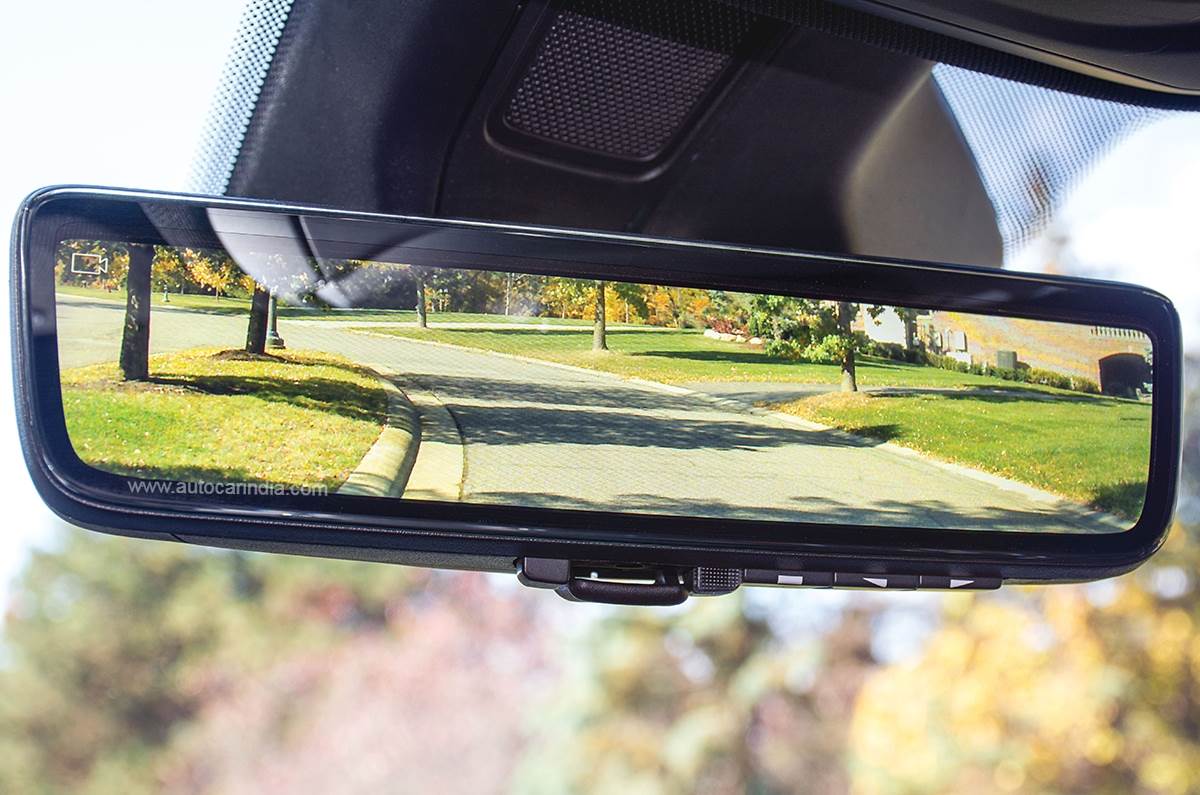 Flip the mirror and it turns into an adjustable video screen.

While quality, design and finish are clearly in luxury SUV territory, some of Jeep’s European rivals have an edge in some areas. However, the gap is not very large and what the competition lacks is the Jeep’s robust and solid construction. That said, some of the plastics lower down on the Grand Cherokee’s dashboard and around the cabin are a bit ordinary, and the fit and finish inside the elbow box and on the cubby hole in the center console isn’t great either. The comfort is good, but a little more leg room would be nice.

The seating comfort on the front seats is very good. Built for large frames, the seats are large, supportive and cooled. The two-tone finish looks great, and side support and visibility are also good. Although it feels more spacious in the back than the previous Grand Cherokee, the space is not huge. However, the rear bench is placed at a good height so thigh support is decent and the large sunroof can illuminate the cabin. You also get manually adjustable blinds, a nice rubberized tray for your phone above the rear vents, and just like the front, there’s both standard USB and Type-C sockets – a nice touch.

Bigger, wider and deeper is the enormous luggage compartment of 1,076 litres. Mainly done to make room for the third row in the 7-seat L version, it has resulted in the regular car also getting more luggage space. And you also get a spare tire. Bootspace is simply huge; you get a reserve under the floor.

When it comes to design, the new Grand Cherokee is evolutionary. For example, the hood is flatter and wider, Jeep’s seven-slot grille now sits almost vertically and to give it a more sophisticated look, the LED lights, both front and rear, have been slimmed down and are sunk in a block-like shape. There are changes in the profile as well. 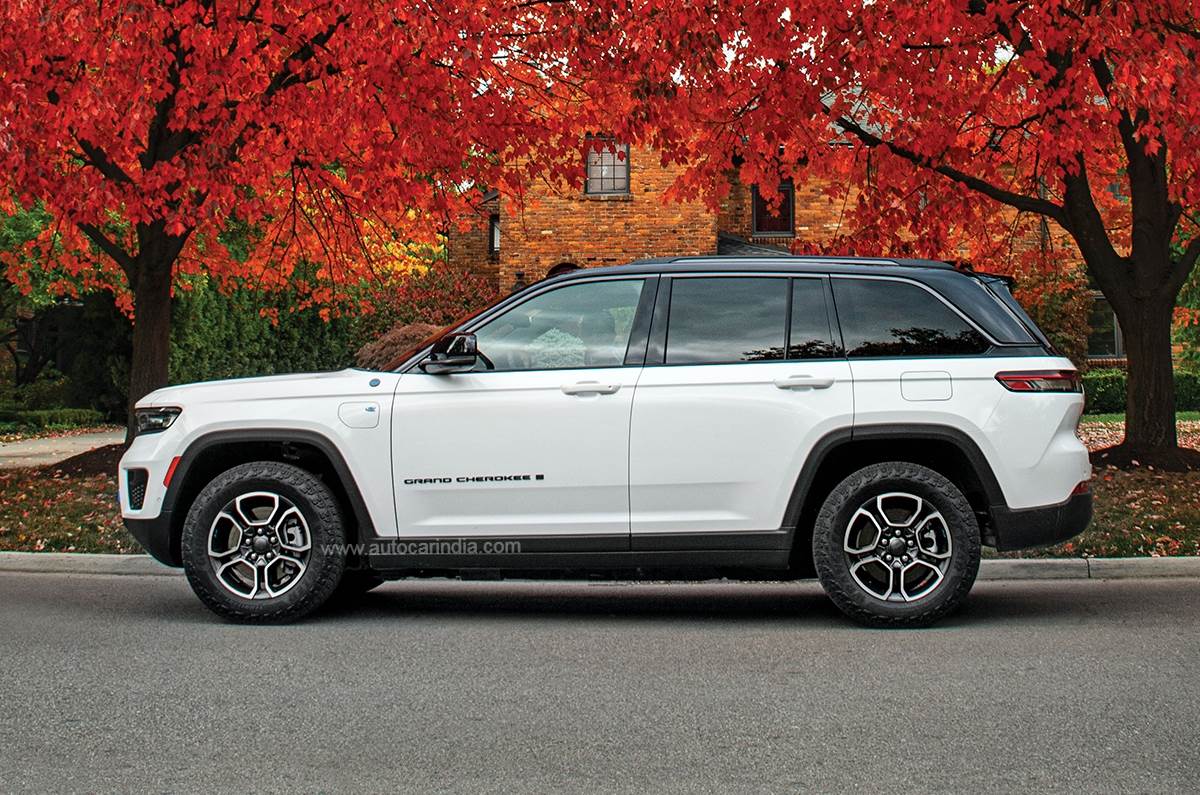 It looks suitably bulky and big, just what customers want from their SUVs.

Around the side, the new Grand Cherokee has a large appearance, with the shoulder line running flat from nose to tail. The square Jeep wheel arches add a lot of definition, and out back the ‘floating’ roofline is well supported with plenty of chrome. But it’s the rear that looks particularly sophisticated and exclusive, the narrow taillights and recessed rear windscreen work particularly well.

Built on a new chassis, with independent front and rear suspension, aluminum arms and high-spec four-wheel drive system, the Grand Cherokee is both a serious off-roader and a luxury car. The car for India comes with steel springs, a permanent four-wheel drive system and a 2.0-litre, four-cylinder turbocharged engine. Jeep Easter Egg, showing the history of the Grand Cherokee.

Often called the most award-winning SUV in history, the Grand Cherokee has always been built with a monocoque. However, this new one is significantly stiffer than the previous one, which Jeep shared with Mercedes (remember Daimler Chrysler?). There’s another reason why it’s well-suited for India – it comes with a chassis specially tailored to take on the roughest and most potholed roads you can find.

While the SUV you see here is a plug-in hybrid, India will get a 270bhp, 2.0 petrol engine without the electric boost. The 2.0-liter turbocharged engine is part of the Stellanti Global Medium Engine family. The direct injection engine uses a twin-scroll turbocharger that is mounted directly on the cylinder head. Efficiency is improved through the use of electric power steering and an electrically driven air conditioning compressor, which removes these loads from the engine. Further up the line, the 2.0 petrol is mated to an 8-speed automatic gearbox and the car in India will also get a Selec-Terrain system with Auto, Sport, Snow, Mud and Sand modes. Only the Trail-Rated version gets the Rock setting, and it’s not coming to India yet. The car in India will ride on 20-inch wheels.

To help keep the SUV’s weight down, both the hood and hatch of the Grand Cherokee are aluminum. Additionally, to save weight, the front axle runs through the engine sump, and a new strut brace improves front-end stiffness by a whopping 125 percent.

Back in the driver’s seat, after a long static evaluation, I find that the first impressions behind the wheel are not what I expect. The Grand Cherokee feels surprisingly light on the feet. There’s none of the nastiness you’d normally find in an SUV of this size. The steering is well weighted and direct, Jeep engineers have given it a quick ratio, and this allows the Grand Cherokee to change direction effortlessly. The steering even weights up nicely at higher speeds and the stability at speed is also really good. The ride is also comfortable. Yes, there is a hint of stiffness at low speed, but the ride on the tall springs, once up to speed, is absorbing. What’s even more impressive is that the Jeep rides flat even over rough patches. 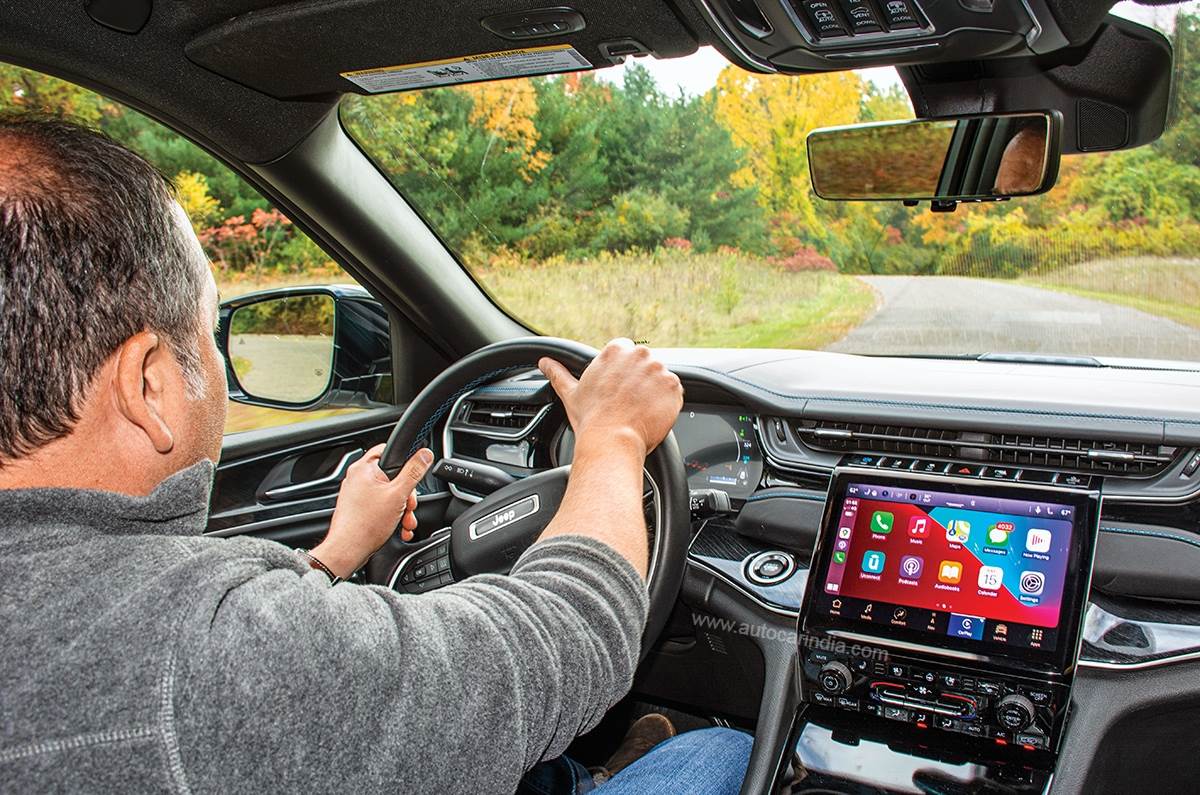 It feels light on the feet and easy to drive.

There is some body roll in tighter corners. Up in the mountains, and especially on faster mountain roads, I have to contend with the SUV’s mass. But even here, after a while, body roll is reined in nicely, and what also helps is that pitching or bobbing is dampened nicely. The brakes also work very efficiently. They are well weighted and give good confidence. That said, there’s an aloofness to the whole driving experience, and driver engagement and connectivity isn’t particularly good, and that’s even by SUV standards. 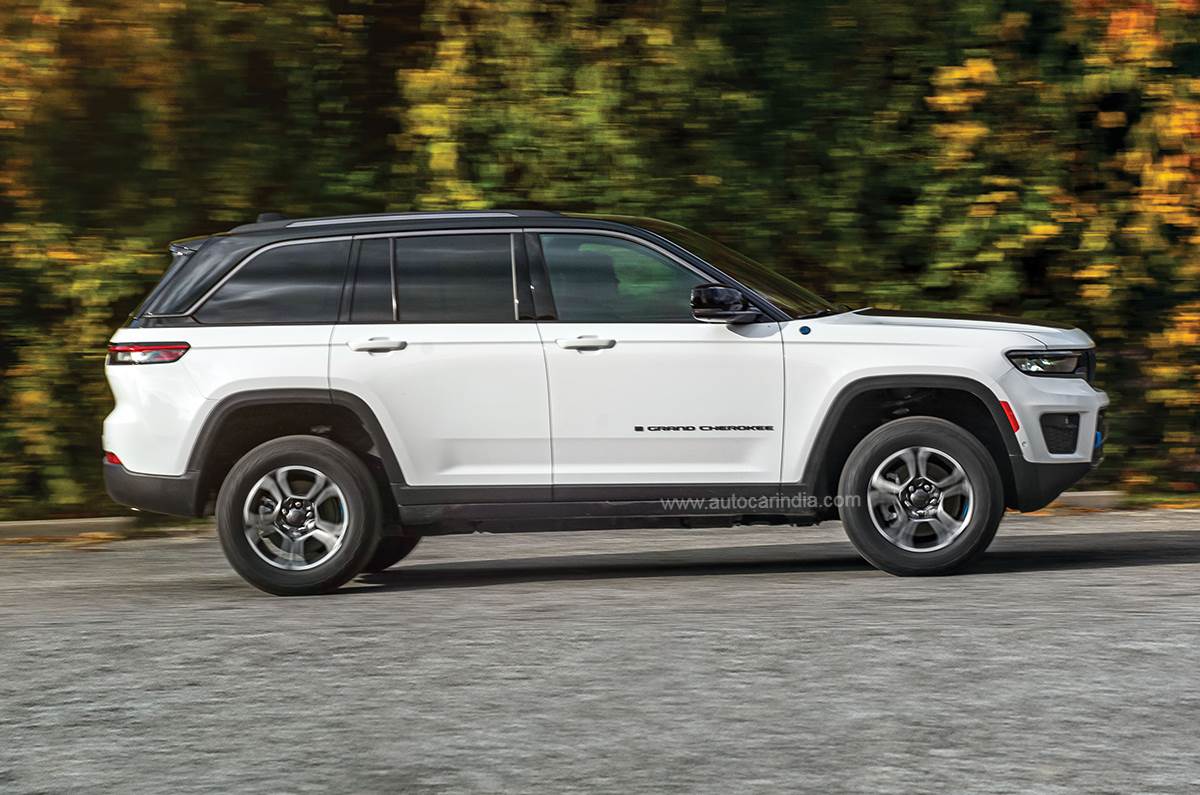 The engine has plenty of drive and performance is good.

With 270 hp on tap, there’s plenty of power from the 2.0, four-cylinder engine. Fortunately, the plug-in hybrid Grand Cherokee I drive allows me to turn off the hybrid system completely, and this allows me to experience the engine exactly as it will be back in India. Once the boost is up, traction is actually very good. The engine has a strong mid-range you can lean on and as the revs build, the power also comes through in a nice progressive way. However, the engine feels strained and gets loud towards the top end, so it’s best to let the quick gearbox upshift early and stay in the punchy mid-range. The presence of a large turbo means there is a temporary pause and some turbo lag at lower engine speeds, and this sometimes causes the Jeep to pause and then lurch forward. While I managed to take the Grand Cherokee off-road – on a steep trail littered with rocky sections – the Jeep handles it so easily it makes me scratch my head in confusion. And this was without activating “Rock” mode or allowing any electrical assistance. This should come as no surprise, Jeep is deadly serious about off-roading, and the Grand Cherokee actually has three different four-wheel drive configurations you can choose from in the US!

Jeep’s Grand Cherokee is not your average luxury SUV. It may look, feel and even drive like one, but underneath it all is an SUV with the heart of an off-road vehicle; and that makes it different. Whether you want to explore trails in and around your country house, take long drives into the hinterland or explore desolate and remote parts of our diverse and amazing country, Jeep’s Grand Cherokee has always been a great combination of serious off-roader and practical, tough SUV. 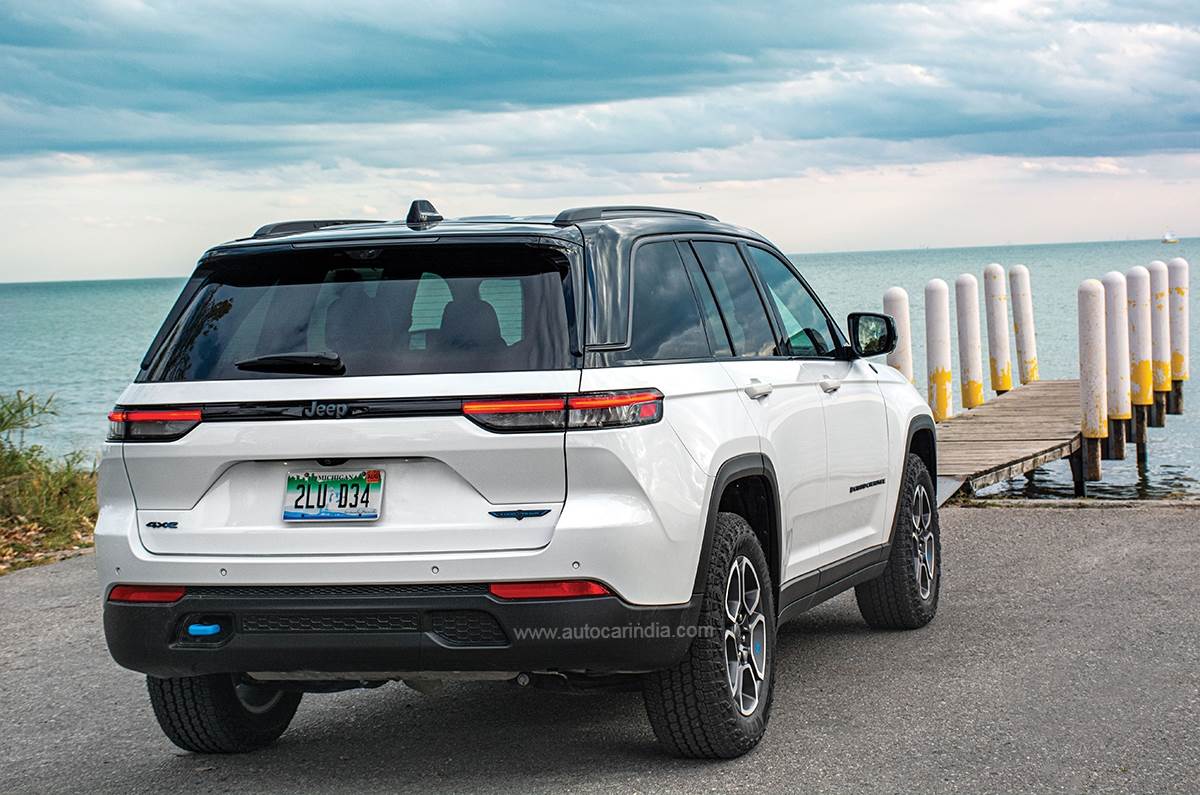 The Grand Cherokee is now a luxury SUV with the heart of an off-road vehicle.

Where this new version takes the game forward is in the areas of fit, finish, material quality and features; yes, it’s a proper luxury car now. Sure, other luxury SUVs have a bit of an edge in some areas and at an expected price of around Rs 70 lakh-80 lakh, the new Grand Cherokee is unlikely to have a significant price advantage either. Still, what you’re likely to get for your money is an X-factor luxury SUV; and it may be just what the doctor ordered.