Admitting my own mistakes is something I learned to do from an early age because after the initial embarrassment, it’s a good way to learn and avoid future obstacles. In that context, when I surprised myself by getting stuck in the sand with a 4WD Jeep, I knew I had to share this experience with anyone who might find themselves in a similar situation.

Let’s start by admitting the obvious – I’m no terrain expert. However, I have participated in a couple of off-road expeditions and played around in the sand in various four-wheel drive vehicles. This background, combined with the knowledge of my whereabouts, gave me a false sense of confidence behind the wheel of the Jeep Compass 4Xe press car during a weekend trip to my favorite beach.

How to turn a sunny Sunday into a muddy nightmare

After spending a beautiful morning by the Mediterranean Sea, I wanted to reach a nice spot for SUV photography that was very close to the open spot I had parked. I could see some puddles on the dirt road, but I thought they wouldn’t be a problem for my Jeep. After all, it came standard with 4WD low and lock capabilities, plus the dedicated Sand/Mud profile for the Jeep Selec-Terrain system, although I knew the paved 235/45 R19 Goodyear Eagle F1 tires would limit its potential.

Following the basic principle, I firmly pressed the gas pedal, letting the electronics do all the work, automatically adjusting the distribution of power between the ICE moving the front wheels and the electric motor at the rear. Everything seemed fine at first, but the next puddles were deeper than they looked, causing quite a struggle from the 4WD system. Thankfully, I reached the site with quite a bit of mud splattered on my Jeep’s body and greenhouse as real battle scars. After I got my cover photo for the review I decided to backtrack from a different route to avoid the puddle related anxiety as the tires were now covered in mud.

The new route only had a large section of water separating me from the accessible field in front of me. Unfortunately, there was more quicksand hiding under a thin layer of water. I felt the car sink and after a sharp wheel spin I was forced to stop and check my surroundings to try to avoid digging myself deeper into the mud.

A large part of the front right wheel and the front bumper was under the water and it looked pretty ugly. Before calling for help, I tried backing up a bit while turning the wheels to help the misfit tires find grip. Five agonizing minutes later and against all odds the jeep had managed to get out of this mixture of water, sand and mud, now safely parked on dry patches of grass and sand. The problem is, I was back at ground zero and didn’t want to try again what felt like a suicide mission for the car.

Avoids quicksand, gets stuck in the sand

In these circumstances and happily I didn’t turn the jeep into a modern remake of Titanic, I found a way around the mud by taking a longer route from the beach. The Compass proved quite easy to handle in the sand, even when I needed to go uphill, with 237 hp (177 kW / 240 PS) combined power working its magic. Although I would have preferred a manual transmission instead of the eight-speed automatic found exclusively in the PHEV, I was very pleased with how the electronic systems worked.

A few minutes later I was driving on the beach heading for the entrance. Unfortunately, my happiest moment is when I made my biggest mistake – I stopped to check for rocks in front of me that could damage the car. The sand may have looked completely dry but by the time I got closer to the seashore it was quite wet underneath, showing that it had rained heavily before. I got back in the car and tried to ease myself forward but it didn’t work. The wheels started spinning and despite my best efforts with different settings they kept digging deeper into the sand.

When I got out I realized the belly of the compass was resting on the ground making it really hard for the wheels to find traction. I started removing the sand with my bare hands, a process that would continue for 2-3 hours with no positive result. I realized that there was so much moisture underground, with the increasing spring movement showing me that there was no point in digging deeper. I tried putting large rocks under the wheels but they couldn’t do much with the majority of the 1,860 kg (4,101 lb) of the Compass 4Xe resting on the ground. 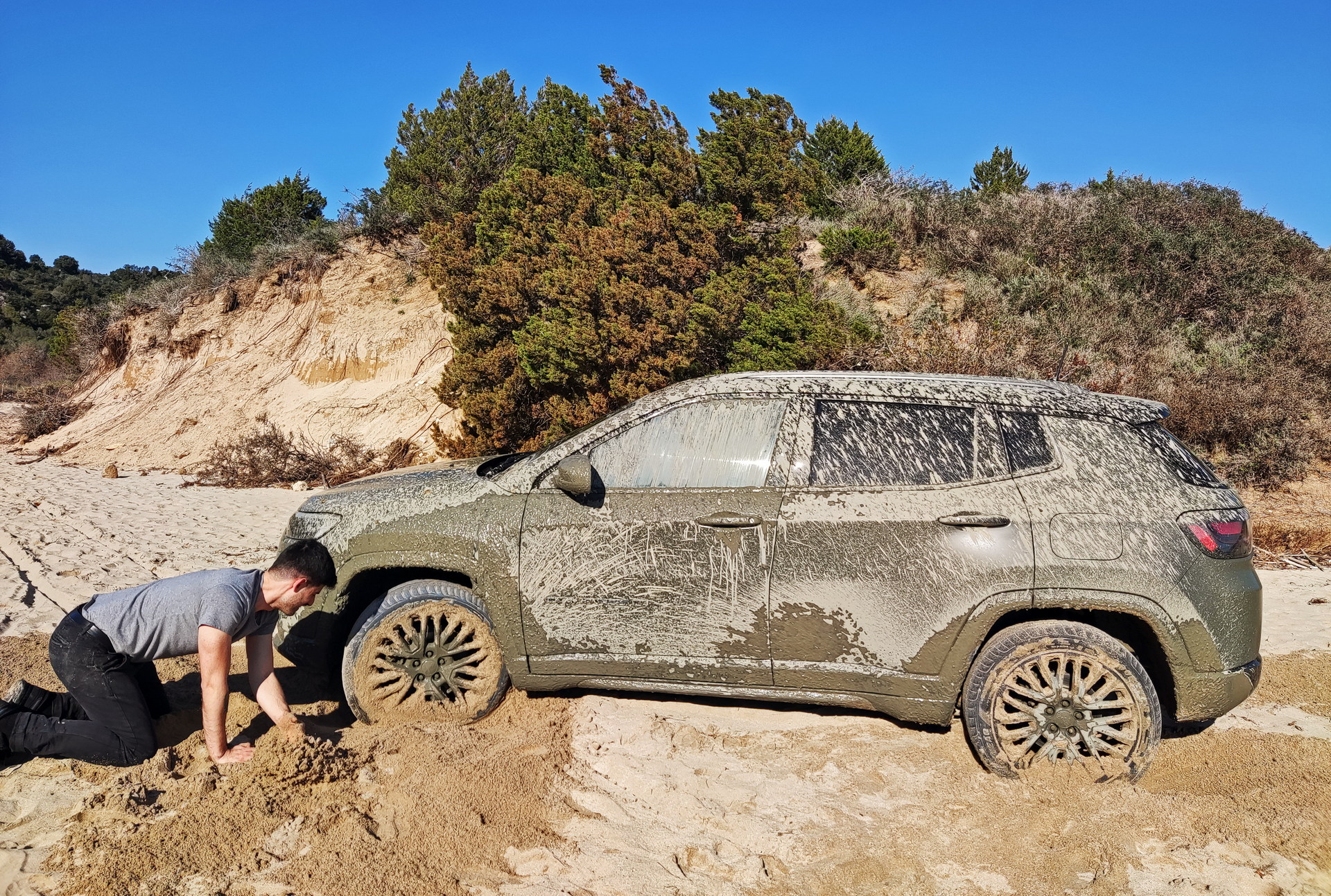 The fact that I was driving a press car meant that I could theoretically get free roadside assistance, although I wasn’t very optimistic given that it was a Sunday afternoon in a remote location. After informing the very understanding local Stellantis / Jeep representative, I called the number I found in the glove compartment to ask for help. Surprisingly, the lady on the phone informed me that they cannot send someone if there is no damage to the car or no accident involved. What I didn’t know at the time was that there was another number for accidents and another for roadside assistance and apparently I needed the latter more than the former.

Out of my stupidity, I contacted the local authorities to help me find someone to pull me out. Two hours later I got a phone number and spoke to a guy with a tractor who was willing to help me. Being there too long and fearing it would be dark soon, I accepted his insanely expensive offer as the only possible option to get home safely in the jeep. As I waited for him to cover the 10 km (6 miles) from the nearest village on his slow tractor, I thought about the challenges ahead. 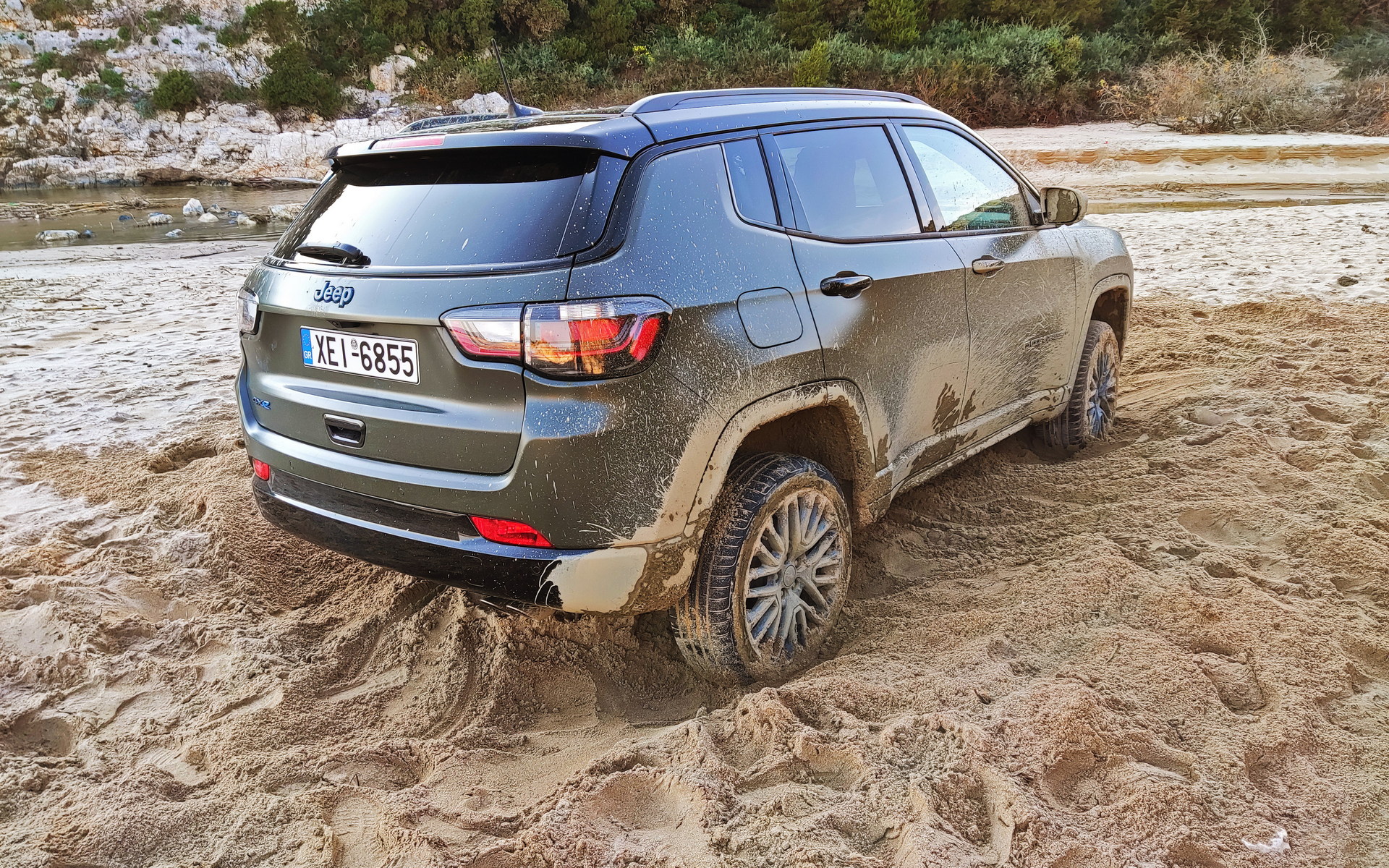 Thus, I prepared the car for towing by locating the recovery point under the small latch on the front bumper that was quite difficult to open with bare hands, and hooking up the emergency towbar that was stored under the cargo area. Another piece of advice here – never leave the hitch on the sand while digging; I almost lost it forever on that beach. I also dug a ramp in front of the car so the front bumper wouldn’t be damaged in the towing process.

At this point I was really tired but happy with the result and optimistic about the rescue mission. That’s when a local guy with his girlfriend arrived in an Isuzu D-Max pickup and offered a helping hand. I warned them about the strange calm in the sand that day but he was sure he would be fine on the beach. Even though I had A/T tires and a full-time AWD system, the pickup also got stuck in the sand a few feet from my Jeep. Thankfully, the higher ground clearance and beefier tires helped it out of this embarrassing situation, although this made it clear that it was not suitable for towing another vehicle. The driver admitted that he had never seen the beach like that.

Save the jeep and a near-death experience

I was very happy when the tractor arrived with the correct drawbars. We wasted no time and quickly strapped them onto the emergency towbar (by the way, the Compass Trailhawk has fixed hooks). I put the automatic transmission in neutral and the tractor started to reverse. I could feel the force pulling me out of this hole but the nightmare wasn’t over.

The driver made the wrong call and ended up with one of the two massive rear wheels of the tractor hanging in the air. Next to the beach entrance there was a small river and he walked dangerously close to the edge and almost fell over. Knowing that a rollover from such a height on a cabless tractor would be fatal to the driver, I was really scared. But at the very last minute he somehow saved it and got the tractor back to safe ground.

A few minutes later I was parked in the same open space where my adventure began. I was tired but happy that everything turned out fine with no injuries or damage to the car. All I had to do was remove the – now dried – mud from the Jeep so I could protect its mechanical components and the 80th Anniversary Edition paint. I eased into the nearest gas station with a car wash.

Thankfully, they agreed to wash the mud-covered Jeep when I offered to pay extra due to my Sunday afternoon visit and the condition of the SUV. Large patches of mud fell from the Jeep, with the pressure washer cleaning its axle, suspension, brakes and plastic skirts. This would cost me four times a regular wash but again I had no option as it would not be safe to drive the vehicle without being able to see out the windows. With a clean compass but a lot of sand in my clothes, I headed back home which took three hours by car.

How to avoid my mistakes 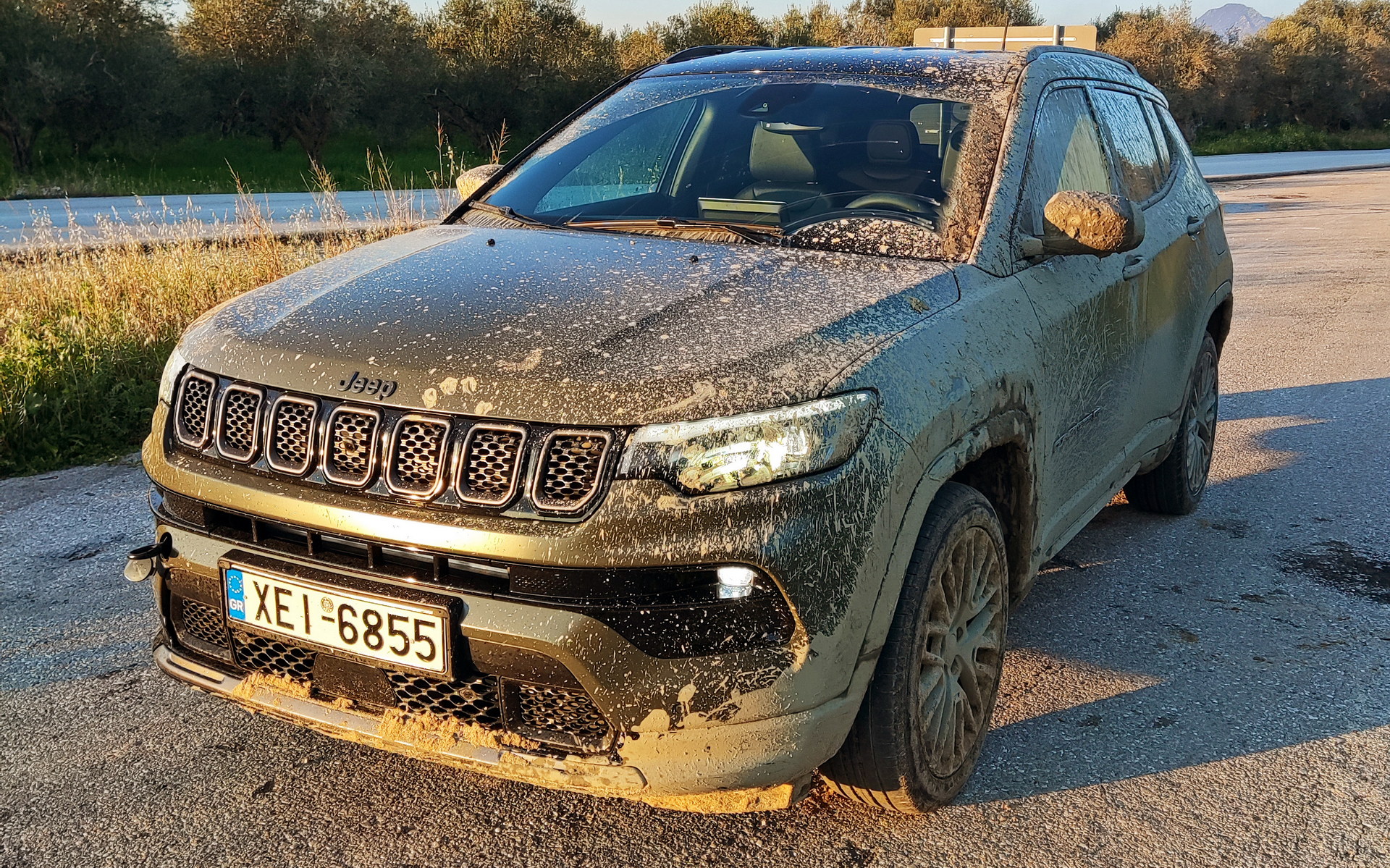 What I learned from this experience can be summed up in a few words. First, don’t take any terrain risks when you’re alone in a remote location. I could just continue my schedule of day trips and find easier places to shoot without getting wet. Second, always check the weather and the condition of the surface you are driving on. If I knew there was record amounts of rain a day earlier or if I had checked the mud/sand with a stick before driving into the quicksand, it would definitely be a safer bet. Third, never overestimate your vehicle’s capabilities when you don’t have much experience with it in similar environments, and never underestimate the effect of an incorrect set of tires. The latter may be more important than the vehicle or powertrain type and should always be considered. Finally, never trust the locals who can scam you when you are in desperate need of their help.

Reading this experience, I’m sure some people will blame the car, thinking it’s a soft SUV that doesn’t compare to “real” Jeeps like the Wrangler. To these, I must say that like all modern C-SUVs, the Compass must satisfy the needs of its target audience who are focused on technology, efficiency, handling, safety and practicality. The 4Xe variant does all this decently, while being the best option in the light off-road segment, especially in the Trailhawk trim with grippy tires, underbody protection and an adventure-fit body kit. Still, it doesn’t compare to ladder-frame off-roaders like the Suzuki Jimny, Ford Bronco or Toyota Land Cruiser, none of which are considered a rival. In conclusion, the Compass 4Xe may be the most “Jeep” among C-SUVs, but it’s also somewhat limited by the characteristics of the segment, its tire lineup … and its driver.