General Motors has begun shipping its first next-generation electric vehicles, the GMC HUMMER EV Edition 1 Pickup and BrightDrop EV600 light commercial vehicles, both built on the Ultium platform. This dedicated EV architecture and propulsion system is the foundation of GM’s all-electric future, giving the company the ability to not only build an entire retail and commercial portfolio, but also leverage the technology to expand its business into non-automotive applications.

With 30 all-new electric vehicles planned globally by 2025, two-thirds of which will be available in North America, Ultium will be the key driver of GM’s expansion and next phase of growth.

The Ultium platform will:

The first 2022 GMC HUMMER EV Pickup Edition 1 leaves Factory ZERO in Detroit and Hamtramck, Michigan. VIN 001 was auctioned in March 2021 at the Barrett-Jackson Scottsdale auction for $2.5 million to benefit the Tunnel to Towers Foundation. (Photo by Jeffrey Sauger for General Motors)

The GMC HUMMER EV Pickup’s combined battery pack and body structure allow for outstanding off-road proportions, strong protection of the vehicle’s battery, which acts as a stiffening part of the body, and enough stability to enable features such as removable Infinity Roof panels that would have been difficult to achieve on a conventional pickup.

BrightDrop EV600. In addition to enabling dynamic all-new vehicles like the GMC HUMMER EV offroad super truck, Ultium is helping GM grow its business in new ways. BrightDrop, the new technology startup from GM, is on a mission to reimagine commercial delivery and logistics for an all-electric future through products like the EV600 light commercial vehicle. 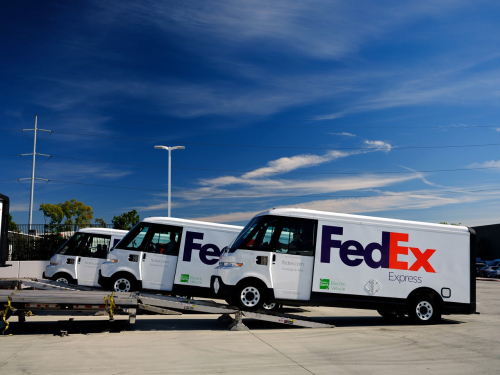 BrightDrop is delivering the first five of 500 electric light commercial vehicles to FedEx, the first customer to receive the EV600s, which are the fastest-built vehicles, from concept to market, in General Motors history. Photo courtesy of FedEx

Ultium will allow BrightDrop to rapidly accelerate toward electrifying last-mile deliveries and reducing vehicle emissions while helping other companies achieve their sustainability goals. BrightDrop is now delivering its first EV600s to FedEx, moving from concept to market introduction faster than any GM vehicle in history.

GM’s next Ultium-based vehicle, the Cadillac LYRIQ, is expected to launch as planned in the first half of 2022 and will be assembled in Spring Hill, Tennessee. The Chevrolet Silverado EV will officially debut next month at CES.