9 of us decided to head to Achalu Betta located at Kanakapura Taluk, Karnataka. The environs of Kanakpura where there are many tourist spots and retreats, hosts amazing off-road trails and is an absolute paradise for adventure seekers.

What was supposed to be a single day off-road excursion on a moderate trail turned out to be a hard-hitting off-road ride that took us through an inhospitable, hostile betta (hill) terrain that tested us and our machinery to the core. Before I write down this anecdote of adventure, I present a poem composed by me which is a reflection of the statements narrated below.

Jeeps and gypsies on a trail,

At a pace less than a snail’s pace.

Over the top is the temple,

If we reach? It’s a gamble.

Through slush and boulders we walk,

Over the rocky montago,

Regardless of stock or custom rig,

Crawls on the rocks no matter how big they are.

Ditches and boulders were no less,

But we are ready for the mess.

The tires are big, low gears are loaded,

That’s why we barge.

Bending over rocks and looking at the sky,

Tire and ground no interaction,

Because we lost our grip.

When it’s impossible, we winch,

Although not easy as pie.

One or two wheels in the air,

Still, we lost the gear.

This is the story of our climb to Achalu Betta,

Don’t try without a lot of data.

Happy to be at Kanakpura,

Well, 9 of us decided to head to Achalu Betta located at Kanakapura Taluk, Karnataka on 9/7/22. The environs of Kanakpura where there are many tourist spots and retreats, hosts amazing off-road trails and is an absolute paradise for adventure seekers. The whole point of most of the off-road trails carved out of rocky mountains around Kanakpura is that they lead to the respective ancient temples.

Achalu Betta (Betta means small mountain or hills in Kannada) also known as Achalu Muneshwara Betta is located in Achalu Village, Kanakapura Taluk, on the top is Lord Muneshwara Temple. Going by the local people’s version, this temple gains significance once every year where the village fair (Jathre) takes place. Accordingly, the road leading to the summit is set up every year by tillers every year before the village fair to make it passable and easily accessible to tractors.

The story of the local villagers was that after a pandemic since the fair did not take place, the local administration has forgotten the aforementioned hills and its place of pilgrimage and will continue to do so until next year’s village fair which has made the road leading to the top absolutely impassable and that to and with getting out on the path on foot is difficult.

Anyway, we reached Achalu Village from Bangalore which was about 2 hours drive (80 km), at about 11:00 AM and approached the trail leading to the top of Achalu Betta. The terrain appears to be made of trenches, ditches, boulders, rock formations, loose mud and what not. For a moment we doubted whether this was the road or dry riverbed. The constant downpour of rain had decayed and disintegrated the road making it analogous to a riverbed.

In the beginning the MM 540 driven by Rajavardhan led the convoy with its MT tires and crazy articulation dove into the trenches and crawled out of it with all the torque the mighty DI Turbo engine put in. Followed by my gypsy which is fully armored under the body i.e. custom rocksliders, front and rear diff guards, t-case guards, engine sump and radiator guards, gas tank guards, off-road winch bumpers, gas shock absorbers and added leaf spring blades for height gain and articulation, gave some peace of mind then the skid plates took a couple of hits over the boulders. Raj’s MM 540 and my Gypsy were winch equipped. The other two Gypsies belonging to Rohit (Hard Top) and Kalyan were raised and fitted with MT and AT tires respectively, the former being a hard top Gypsy. The Thar Crde was overall well equipped and modded for creature comforts owned by Ramachandra who is a veteran off-roader and knows the trails around Kanakpura. The entire team are Bhpians at heart and are avid readers of this beloved forum.

As usual, the Gypsies overcame the obstacles with their momentum and the Mahindras with their signature slow and studious style were on their way. Now a ditch long and deep enough will swallow half the rig. This huge ditch seemed like a show stopper. With no other option, we decided to fill the ditch with stones so that we can cross over them. After taking in some small rocks that had fallen around and dumping them into the ditch, it felt like we might need half a day’s work just to fill that particular ditch. Then we thought about dragging huge boulders with the winch and guiding it to the ditch. We then put the jerk block to use for double line winching of boulders which helped us quickly fill 3/4 of the trench and finally we cleared that obstacle with great difficulty. Here is the link to the video on how the trenches were filled.

The next obstacle was a trench with sharp-edged boulders and the MM540 had to winch itself out after sweating it out with all its torque and articulation but to no avail. Once the MM 540 winched itself out, it was driven to height and backed up to win out other rigs. As expected, my gypsy struggled over the rocks in the ditch and the 540 that was parked horizontally against the gypsy started to winch the gypsy out, which is when we observed that the 540 had also started to slide down even after the brakes were rammed. The 540 was then tied to a tree with a nylon sling on its rear tow hook, after which the 540 held steady during the winching process and pulled out the remainder of the conveyor belt to clear the aforementioned obstacle. The absence of diff lockers often haunted us during the course of escalating the trail. After that, the terrain eased itself with small stones and we were able to overcome this part without ending up in chaos. After some grueling attempts, Kalyan and Rohit met the same fate and were winched out, though Rohit’s Gypsy almost made it, with those MT tires bouncing around the rocks. Here is the video link of the MM540 winching out my gypsy.

While the 540 had to winch itself out, we couldn’t find a suitable tree to anchor the winch line to and then came up with this strange idea of ​​tying the winch extension rope over a huge rock which was internally connected to the D-shackle to nylon loop followed by winch metal rope. Fortunately, this worked. By taking a closer look at the following video, one can understand how this happened.

Another video of the 540 trying to pass the ditch.

Moving on, we came across a huge rock formation where the ‘Nandhi’ statute is located adjacent to the temple. Although we didn’t dare to get the rigs closer to the temple (as we shouldn’t after dark) we ascended the adjacent steep rock formation which was slippery and required continuous throttle to reach the top. The view from the top is mesmerizing, surrounded by verdant hills akin to the Western Ghats.

Gypsies pushing through the boulders: Video

Thar Crde struggles but 540 does it in style: Video

A bit of rock crawling leading to the summit: Video

After that we decided to descend as the daylight was showing symptoms of disappearing soon as this trail would be a misery to traverse in the dark. Although gravity favored us, the descent was an experience in itself, seeing wheels lifted into the air quite often and feeling like the terrain we never ascended. This was an unforgettable escapade that was an unexpected endeavor: Video

My favorite under-chassis shot taken on a GoPro during descent.

All of us returned home to reminisce about the great adventurous day and I thought about installing the diff cabinets before the next OTR.

Compilation of some happy moments: Video

Last but not least I would like to thank Ramanji (the short man in the blue shirt and hat) who was instrumental in taming the terrain by helping us fill the trenches with stones, attach winch ropes and pull blocks etc without whom this excursion would not have been so happy 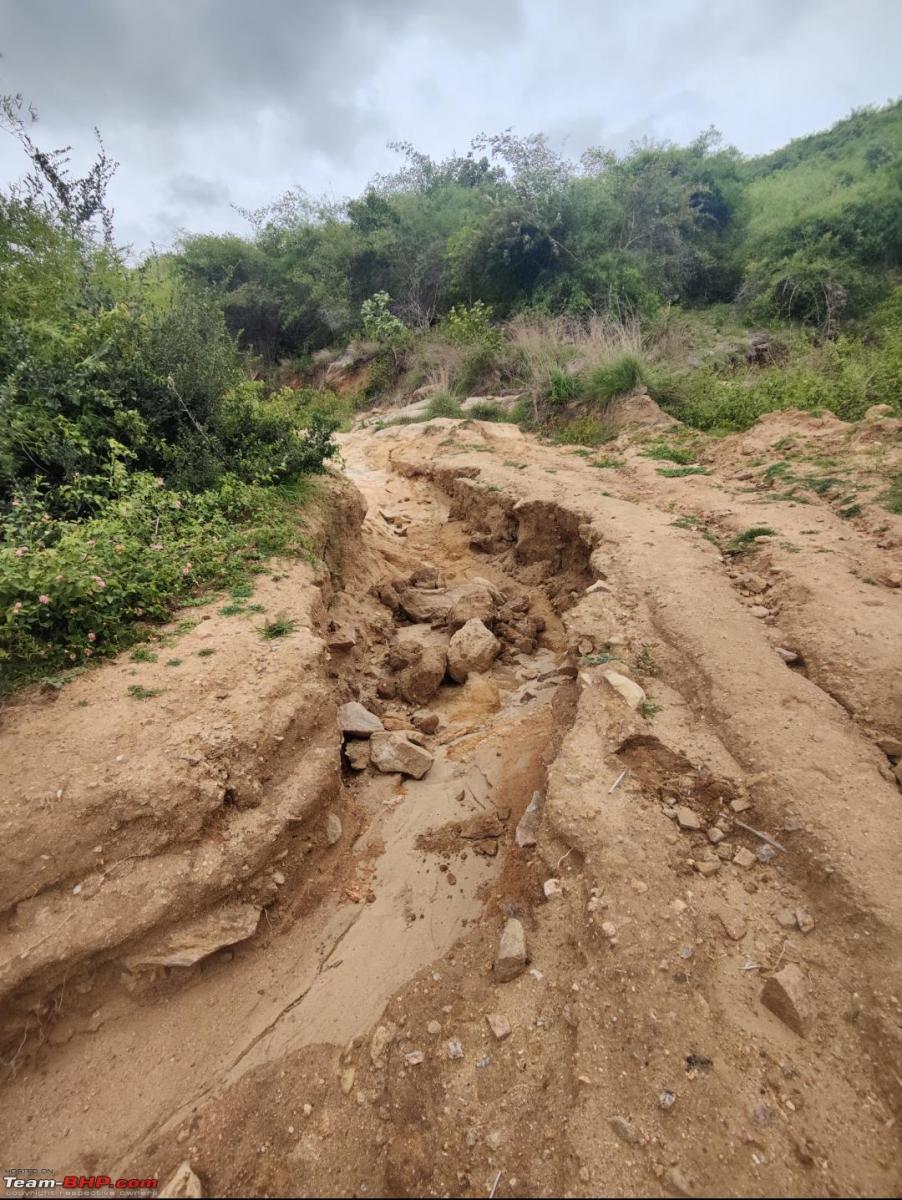 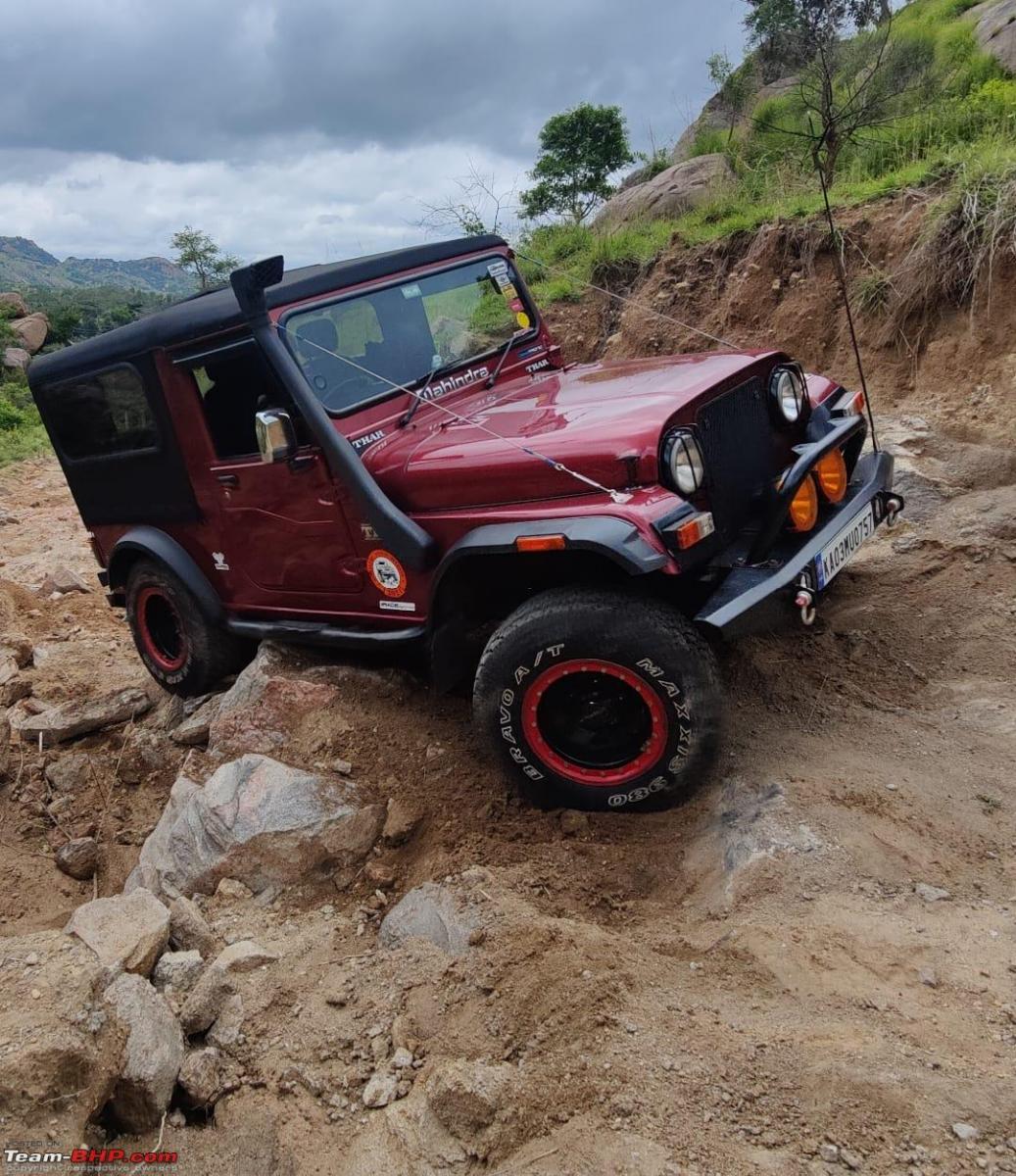 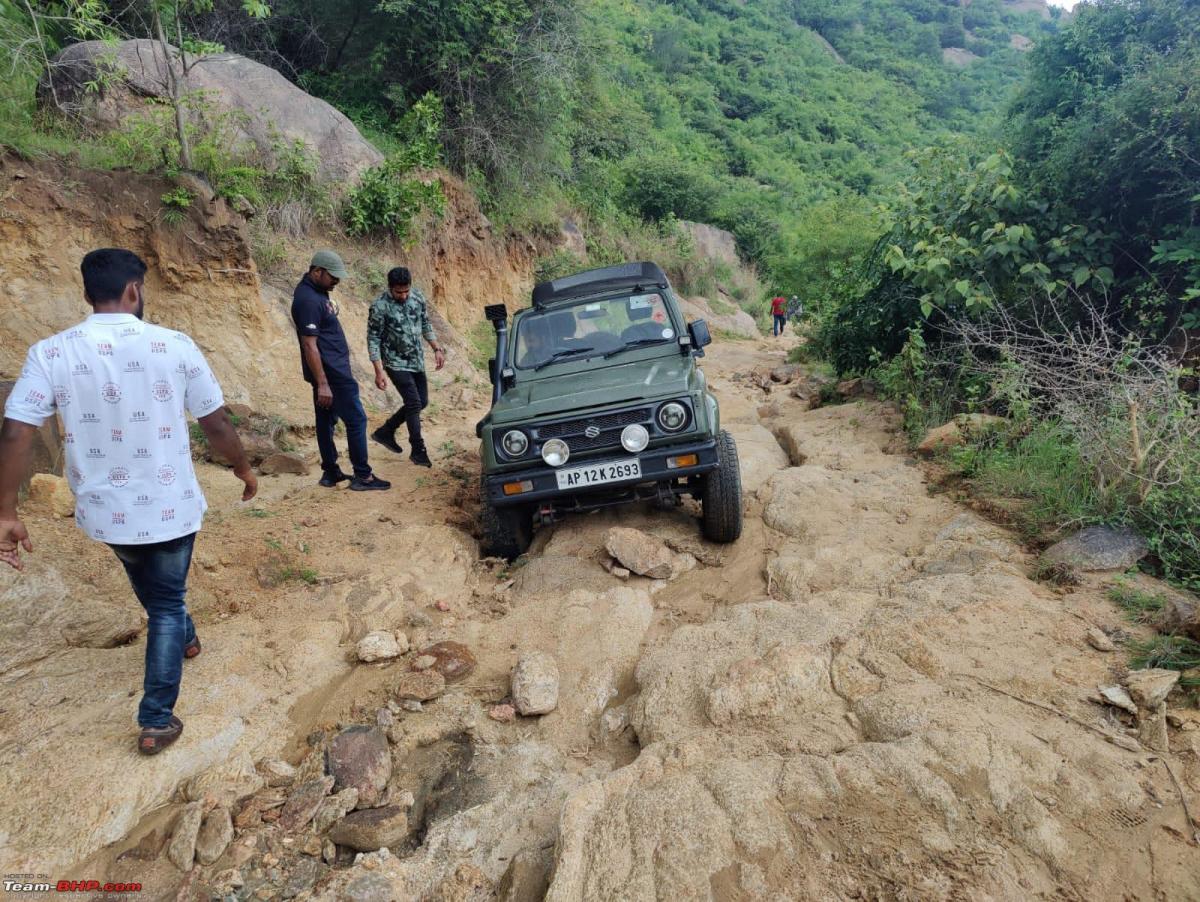 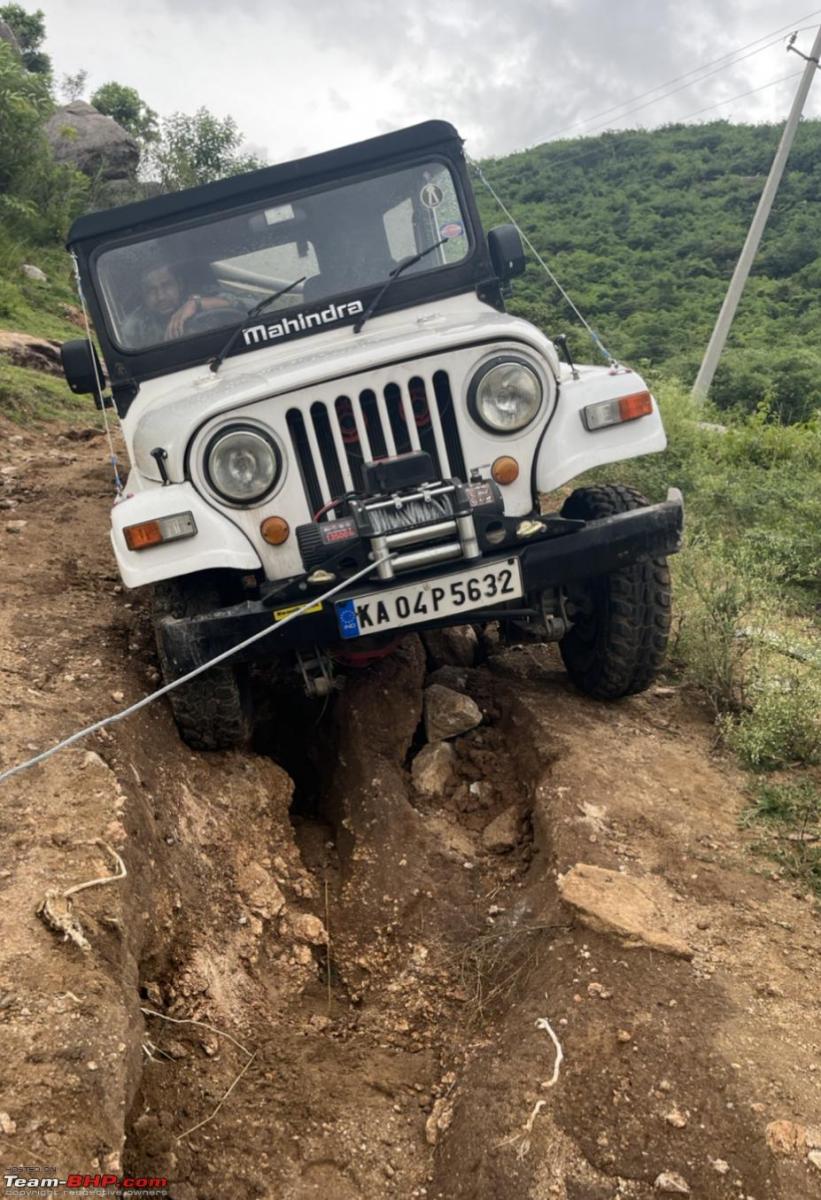 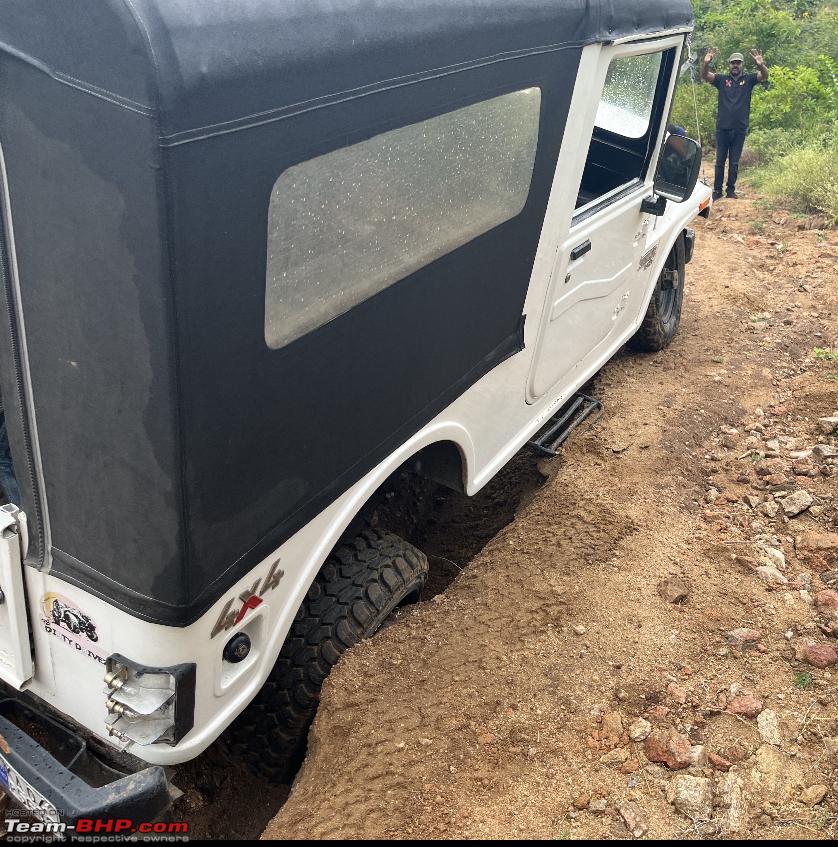 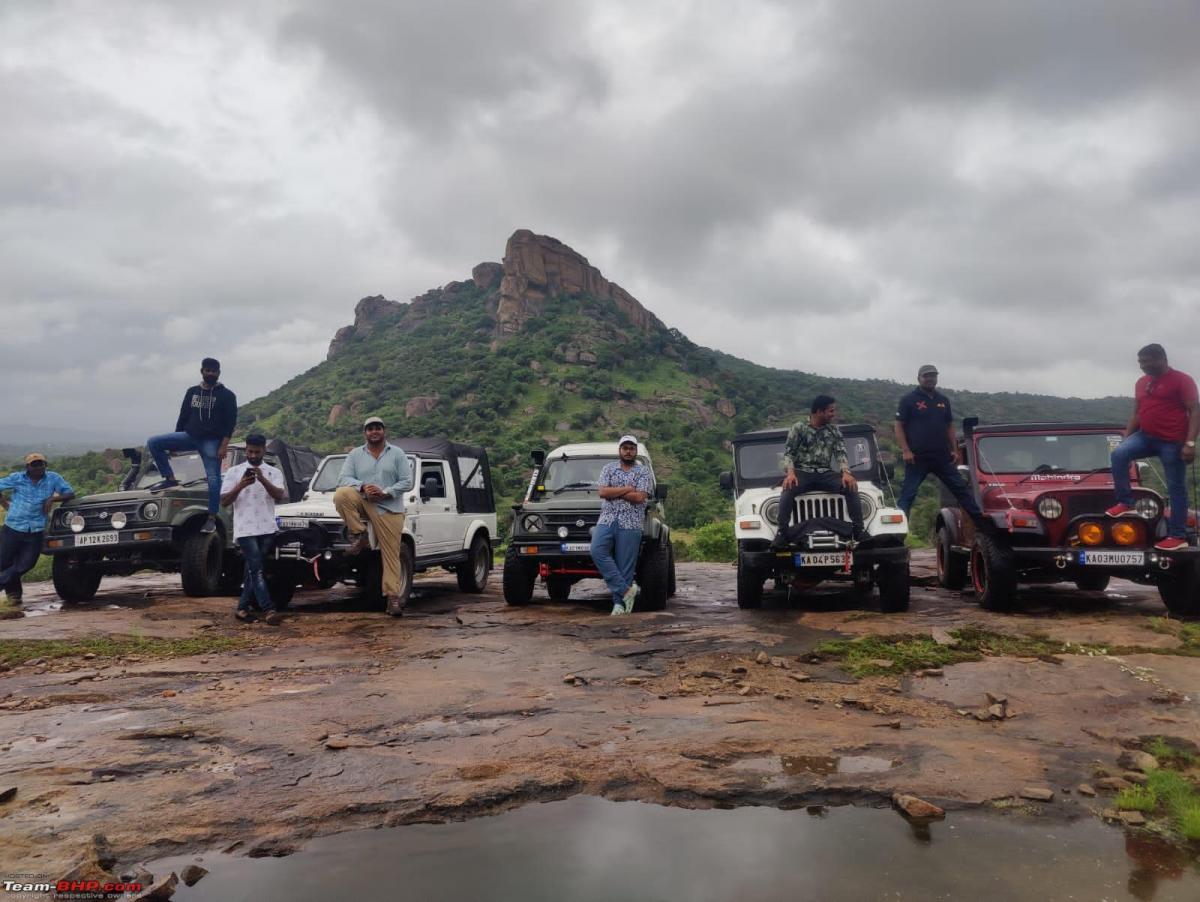 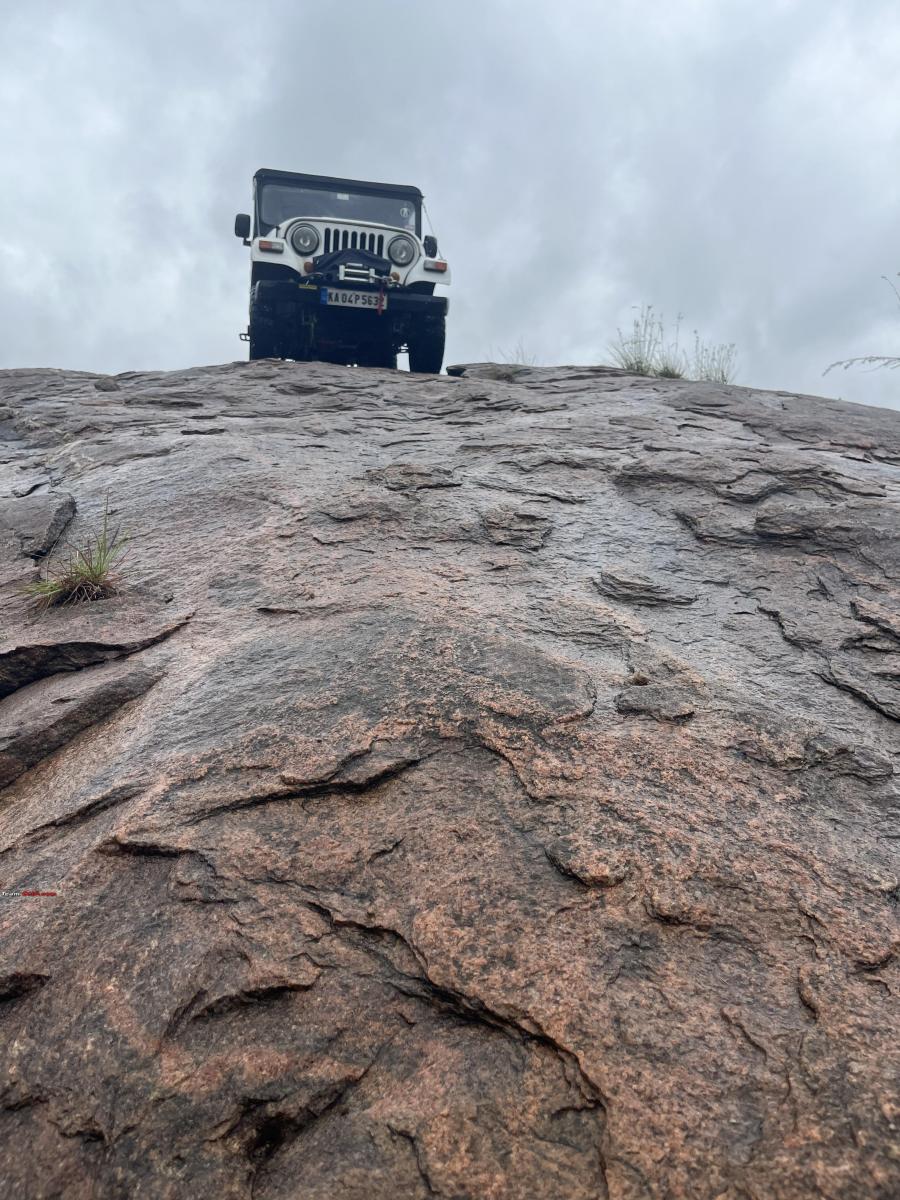