Electric vehicles have zero exhaust emissions, unlike their gasoline-burning counterparts, but they are still responsible for greenhouse gas emissions. As sales of electric cars increase, policymakers and advocates should explore ways to increase their efficiency and reduce the cars’ environmental impact.

All-electric vehicles without a gasoline engine (which we will call electric cars) get their power from the grid. And in the US, around 60 percent of electricity is generated by burning fossil fuels. Until the grid is completely carbon-free, there will be emissions from generating the electricity to drive electric cars, so-called upstream emissions.

Emissions per mile driven are lower for electric cars than for gasoline-powered cars of the same size, but they are not zero. The Chevy Bolt EV accounts for approximately 92 grams of carbon dioxide (CO2) per mile when accounting for emissions from the electrical grid. (The CO2 calculations are based on the national average, but grid emissions vary considerably across the country.) The petrol-powered Chevy Malibu causes over 320 grams per mile. Comparing larger vehicles, the original Hummer H1 emits 889 grams of CO2 per mile and the new Hummer EV causes 341 grams, showing that huge electric cars can still be worse for the environment than smaller, conventional vehicles.

The environmental impact of electric cars is not just about the electricity generated to drive each mile. The manufacturing process also causes emissions of greenhouse gases in several stages, known as the vehicle’s embodied emissions. Electric cars in particular – with heavy battery packs – use minerals that have to be mined, processed and turned into batteries. The pursuit of greater range and larger vehicles requires increased battery size, while the embodied emissions increase.

Mining the minerals used for batteries has a significant impact on the environment and can have negative social impacts, including the well-documented human rights abuses surrounding the extraction of cobalt, a key mineral for many electric car batteries. More efficient electric cars need less battery to have the same range, which means fewer emissions and fewer problems associated with mining the minerals.

Most drivers have a good sense of how fuel efficient their gasoline-powered vehicles are, and policymakers have recently demanded greater efficiency in new vehicles. But the efficiency of electric cars is often forgotten. As electric cars proliferate, their efficiency should be a priority for policymakers. Just as the efficiency of gasoline-powered vehicles has many benefits for the environment and consumers, so does higher EV efficiency. The less electricity needed to drive one mile, the fewer emissions from electricity production, and the more money drivers save. Greater efficiency could also mean car manufacturers can reduce battery size to achieve the same range, leading to less mining and fewer on-board emissions.

The Environmental Protection Agency should explore ways to include electric vehicle efficiency in fuel efficiency and greenhouse gas standards, starting with consideration of electric vehicle upstream emissions. Currently, regulatory authorities calculate the emissions from gasoline vehicles and impose requirements on car manufacturers, but electric cars are not considered to cause any CO2 emissions. This means that the sale of an EV Hummer can offset the sale of a highly polluting gasoline vehicle and increase emissions overall.

Accounting for upstream emissions would mean that the sale of a more efficient electric car would be more beneficial for car manufacturers to meet their regulatory requirements. Not all electric cars have the same impact on the environment, and our vehicle regulations should reflect that.

EV efficiency, much like the efficiency of gasoline-powered vehicles, is largely affected by the efficiency of the engine and powertrain, as well as the weight and aerodynamics of the vehicle. Energy is lost as it goes from the battery to the motor to the wheels. The amount lost can vary by vehicle and contributes to a variation in overall efficiency. Efficiency can also vary significantly depending on the type of vehicle (sedan, crossover, pickup) and its weight. Smaller vehicles tend to be more efficient, so reducing size and weight (as well as improving aerodynamics) can increase efficiency.

Efficiency, often measured in kilowatt-hours (kWh) per 100 miles of driving, can be improved either through technological advances or by reducing vehicle weight and size. Improvements in technology can reduce the amount of energy lost between the battery and the wheels. Reducing EV weight, including from the battery, can reduce the electricity needed. Electric cars benefit from regenerative braking, when energy is captured from braking and returned to the battery, greatly increasing efficiency. That’s one reason why electric drive systems are about twice as efficient as internal combustion engine systems.

We found that lighter vehicles are generally more efficient, but even with roughly the same weight there are more efficient vehicles. Among the 5,000- to 5,500-pound common weights are vehicles with efficiencies ranging from nearly 25 kWh/100 miles, the best on the market, to nearly 48 kWh/100 miles, among the worst. The vehicles with superior efficiency could have more efficient engines, better aerodynamics or better regenerative braking systems. In general, however, higher weights are associated with lower efficiency because it takes more energy to move a heavier car.

Battery packs can make up a significant portion of an EV’s weight, but for a given battery chemistry, a larger battery means greater range, a desirable feature for many consumers. Automakers may want to reduce only the weight of the vehicle without the battery to maintain a high range. We therefore also investigated the efficiency compared to the weight of the vehicle excluding the battery pack, as shown in Figure 2. 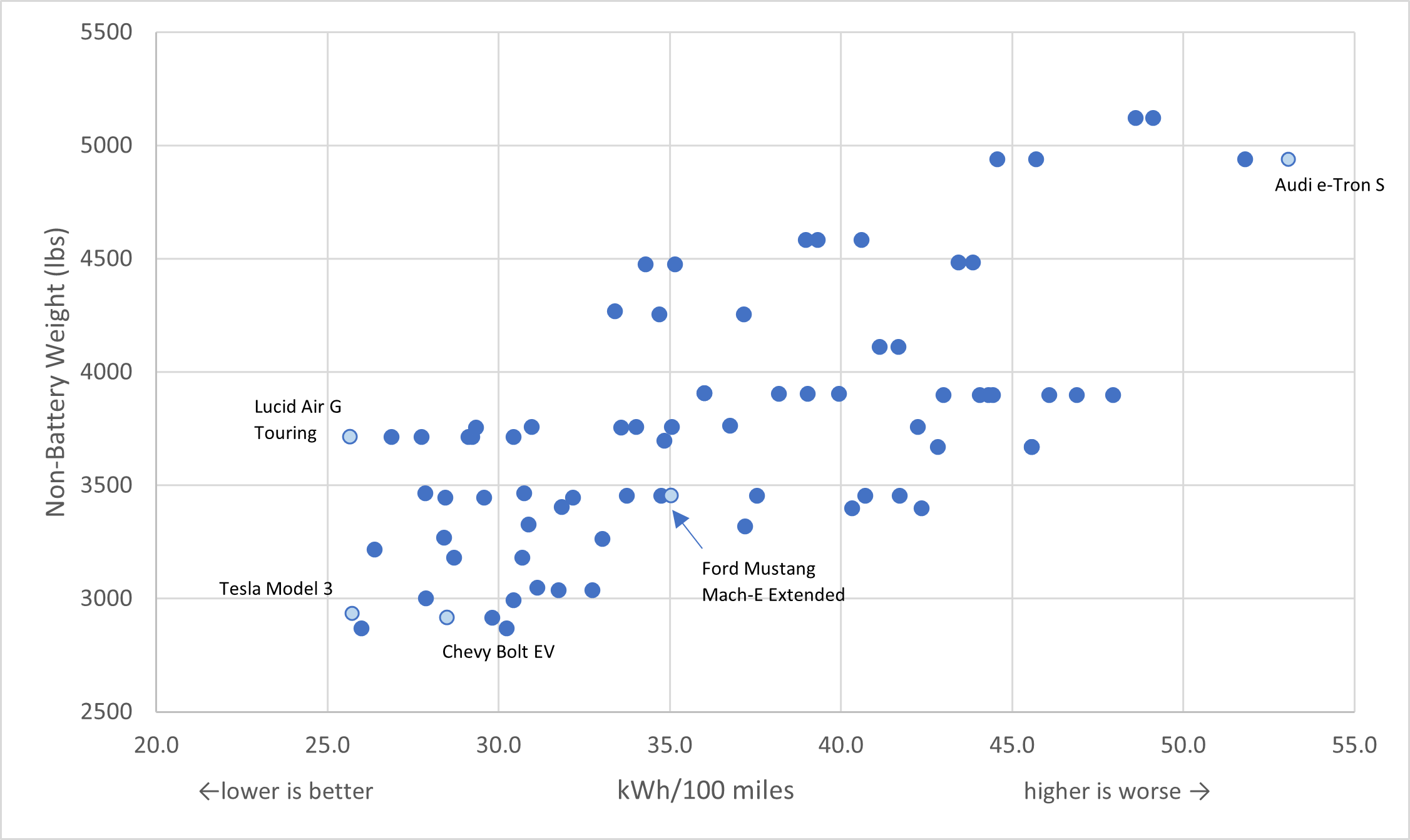 Even when examining non-battery weight, there is a wide variation in efficiency, including among the most common non-battery EVs weighing between 3,000 and 4,000 pounds. Vehicles in this weight range have efficiencies from 25 to over 45 kWh/100 miles. Reducing weight without a battery, often by reducing overall size, can significantly increase efficiency. Improving efficiency by 5 kWh/100 miles while keeping weight the same would reduce emissions per mile by 16 grams of CO2 – a 14 percent reduction for a vehicle with an efficiency of 35 kWh/100 miles.

All EVs are not created equal, so let’s not treat them like they are

Current GHG standards for vehicles do not include upstream emissions from EVs, missing an opportunity to spur greater efficiency, save money and reduce GHG emissions.