NICE, France – The name Avenger may now be associated with the Marvel pantheon of superheroes, but it also has a long history tied to various brands within the Chrysler empire … or whatever corporate name it went under. Most recently that involved a deplorable Caliber-based mid-size Dodge sedan from the 2000s, with a Mitsubishi-based Dodge coupe from the 1990s before that, but elsewhere in the world during the 1970s you could buy a humble sedan that not only went by Dodge Avenger but Chrysler, Hillman, Talbot and Sunbeam Avengers as well. In other words, it was finally Jeep’s turn to get revenge.

The 2023 Jeep Avenger arrives at a time when the aforementioned Chrysler empire has been conquered by the French to create the giant Stellantis Group. It’s Jeep’s first battery-electric model, debuting in the UK next summer with prices starting at around £34,000 or $41,500, but before you get too excited, know that it’ll be just as available to you in America as the old Talbot Avenger : It is not coming to the US.

At 160.8 inches long, the Avenger is Jeep’s smallest model, 6 inches shorter than even the Renegade and only 28.5 inches longer than the original World War II Willys MB Jeep with its Go Devil engine, it was there all the story began. In Europe, vehicles like the Avenger fall into what is known as the B-segment, which is around 20% of all new car sales, with the SUV/crossover part of it currently bubbling up as one of the fastest growing sectors. 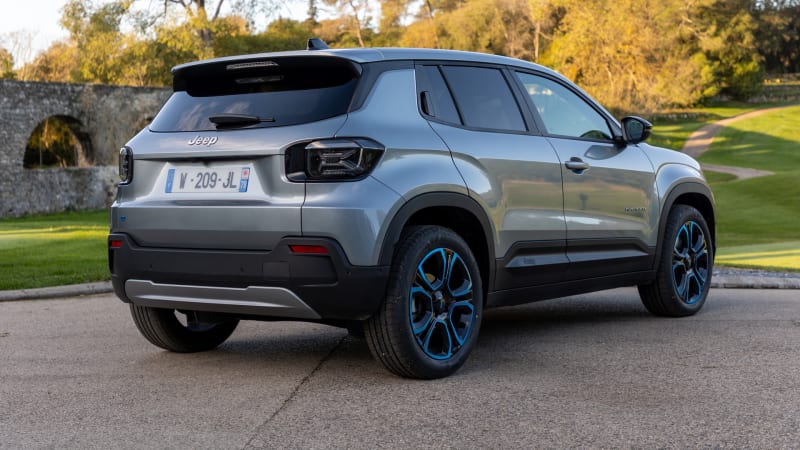 With European bans on new internal combustion engines on the way, plus the draconian and much-criticized Euro 7 emissions requirements set to come into effect in 2025, automakers need to make big changes, fast, and Jeep is no exception. The Avenger is the first of four new battery-electric Jeeps to arrive before 2025. The others are an electric Cherokee, the tentatively named Wagoneer S, and the small, Wrangler-like Jeep Recon.

The thing is, most of the contenders in this jam-packed class of B-segment small SUVs are notable primarily for their blandness, lack of appeal, and almost complete lack of any off-road capability.

So how is Avenger doing?

The battery is a fairly standard 102-cell lithium-ion pack, with a gross energy capacity of 54 kilowatt-hours giving a WLTP combined range of 249 miles. An EPA-rated range would most likely be shorter and possibly similar to the 217 miles we saw indicated during a fast-paced 42-mile test route. However, winter shouldn’t spoil the range too much as the Jeep is equipped with a thermally efficient heat pump heating system.

Unlike most electric cars being introduced these days, the Avenger doesn’t use skateboard-like electric car underpinnings of batteries sandwiched between the wheels under the floor. Instead, its 17 battery modules sit atop a steel sub-plate and are grouped mainly under the seats, leaving legroom free and seat heights lower as a result. It’s a neat system dictated in part because there will be a 1.2-liter gas version of the Avenger sold in Spain and Italy. 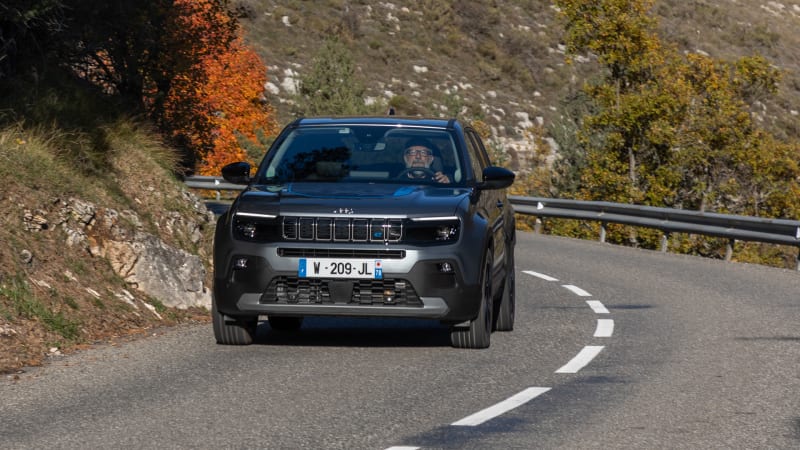 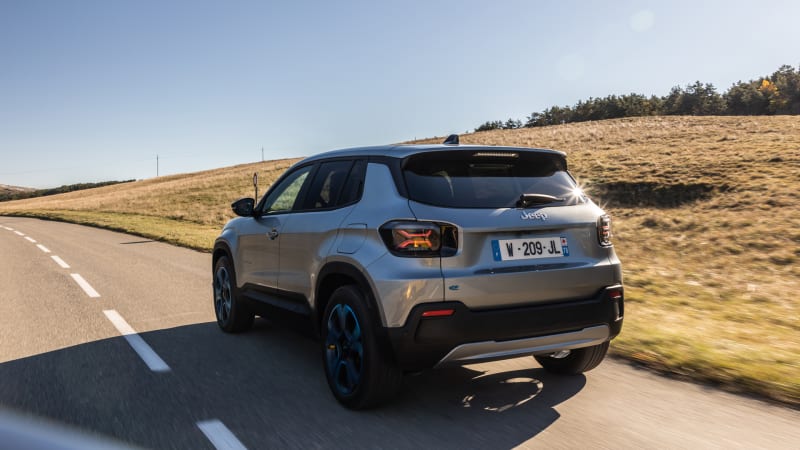 The platform is Stellanti’s eCMP 2, which is shared with Peugeot’s e-208, e-2008, DS 3 and Opel/Vauxhall’s Corsa and Mokka electric. Jeep did a lot of work to make it stronger, shortening overhangs, improving crash structures and enlarging the inner wings to accommodate large diameter tires and provide more wheel travel. On the same reservoir ride, Jeep also grabbed the latest electric architecture and battery technology, plus an engine that sends just 154 horsepower and 184 pound-feet of torque to the front wheels. A dual-motor all-wheel-drive version has already been previewed by the Avenger 4×4 Concept, but it won’t appear (again, at European dealers) until 2024.

So for now this is a front-drive Jeep, which is sacrilege, I know. That said, the Avenger’s measurements look pretty good for at least hilly terrain and rough city streets, not to mention big puddles. It’s a whisker under 70 inches wide and 60 inches tall on a 101-inch wheelbase. Short overhangs and a decent 7.9 inches of ground clearance mean it really looks the part, and it will provide water up to 9 inches deep. It weighs 3,386 pounds and carries four comfortably, five at a push. There is no specified towing weight, so trailer owners should look elsewhere.

Fast charging capabilities are quite strong for this segment and price point, with a maximum 100 kilowatt fast charging speed and an 11kW onboard charger. Charging times range from 24 minutes for a 20% to 80% fill on a 100kW DC fast charger (the more common US market spec is a 10%-80% fill), to eight hours on a 7.4kW UK rated home wall box . 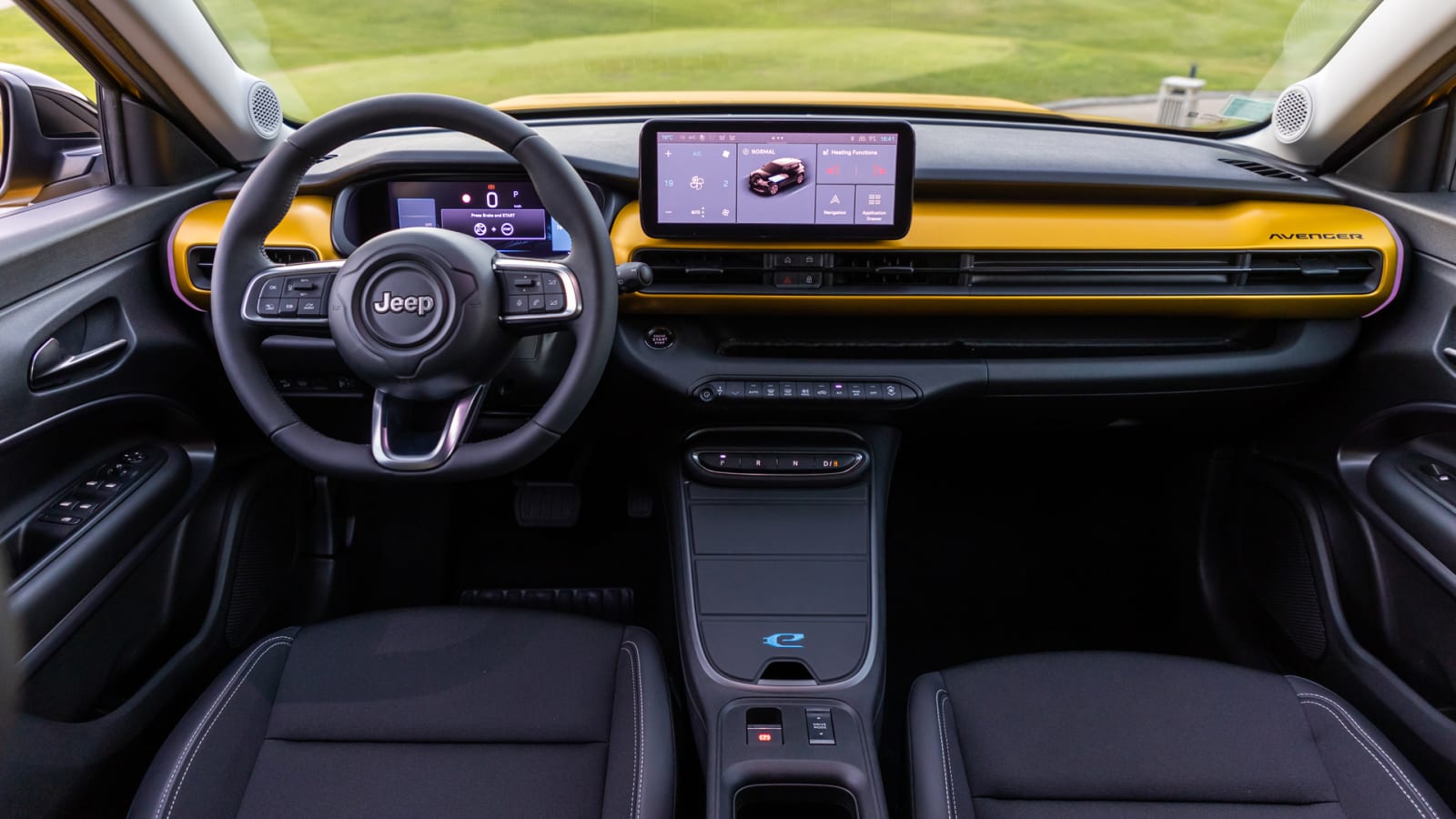 Climb in and the cabin is compact and intimate, but far from cramped. The passenger sits fairly close to the driver, but there are no bumping elbows. In the back, there’s head and legroom to spare for a pair of 6-footers on a well-padded and comfortable bench. The switches are responsive and easy to identify, and the graphics on the touchscreen and instrument binnacle are nicely realized but not flashy. The indicator repeater sounds like a frog trapped in a box.

This is the first edition of the Avenger model, but there is a refreshing lack of all the options willingly thrown on the spec sheet. The seats are still manually adjusted, and there’s a pleasing mechanical feel to it all. The rear seat backs can be folded 60/40, and the cargo area’s dual-level floor allows for either a completely flat cargo floor with the seat down or maximum capacity with it up. The cargo area itself is hardly massive and is fairly high off the ground (old dogs beware), but is serviceably wide at 39.4 inches.

There’s evidence that they’re built to a price, such as the recycled cat fur cover and shiny plastic bezel, but that’s not enough to erase the general impression of being well-built and thoughtfully designed. Those carbon-plastic sides, for example, might look a little cheap, but they make this parking lot proven with Jeep reckoning owners can save up to $1,200 in paint and dent repairs over the life of the Avenger. 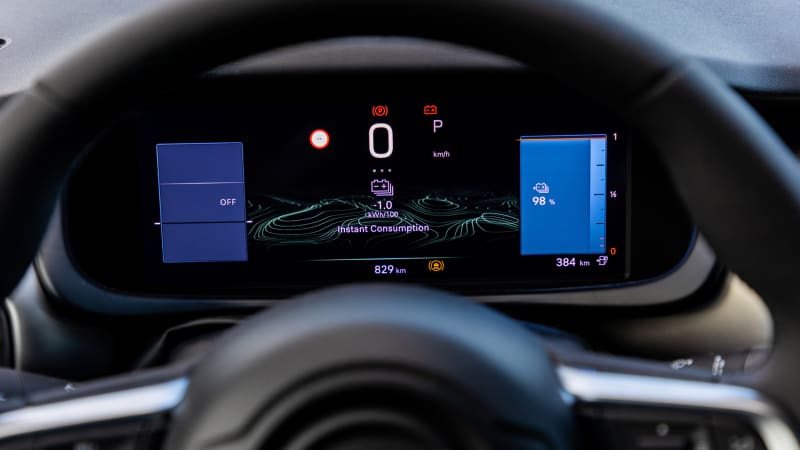 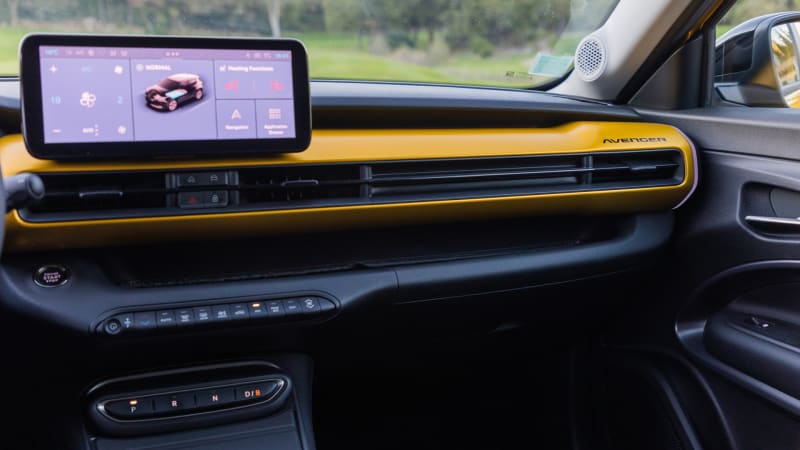 Boot her up, and the systems engage without fuss. The accelerator pedal feels progressive, and it’s easy to pull away smoothly even on a forward or backward incline, which can be a problem with electric cars. The brake control progression is refined and progressive, and on a broken track in the Alpes-Maritimes it was possible to trickle down with ease with the regenerated current flowing back into the battery cells.

Upper spec cars get hill control, which should take you down a grass hill and there are sand, mud and snow drive modes that alter the electronic stability systems and throttle. There’s also a sophisticated brake-based traction control system, which allows some progress when a wheel is in the air, although I wouldn’t attempt anything too ambitious. It’s definitely not Trail Rated.

Performance is lively for a B-segment car sold in Europe and suitable for the urban sprawl that will be the Avengers’ natural habitat, but by American standards a 0-62mph time of 9 seconds won’t impress anyone . There are three drive modes, which isn’t unusual, but their ability to actually change engine output is. Sport makes a whopping 156bhp and 192lb-ft, but Normal limits you to 109bhp and 162lb-ft, while Eco cuts that down further to a measly 82bhp and 132lb-ft. 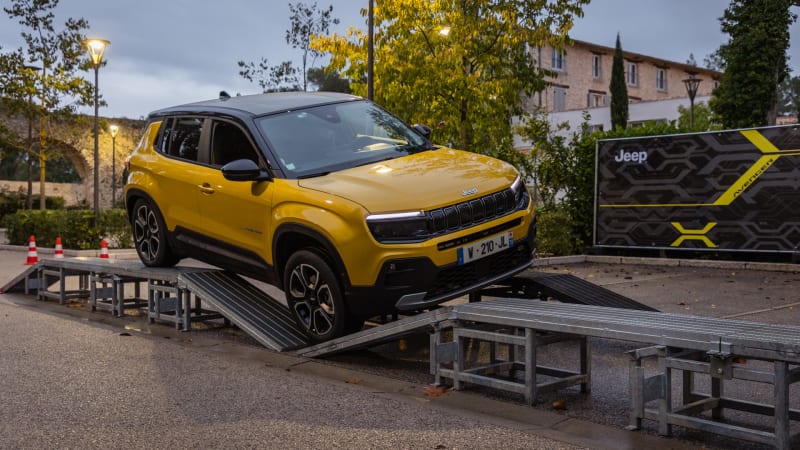 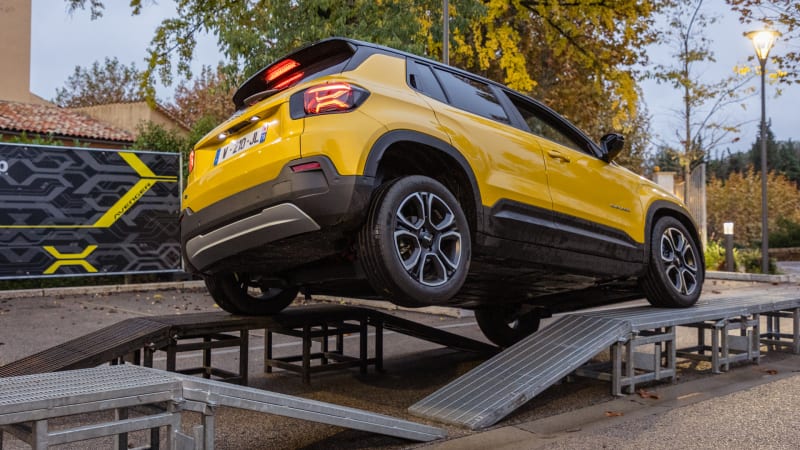 Suspension is MacPherson struts up front with a torsion beam rear, and on well-paved roads the Avenger floats nicely from curve to curve with well-contained body roll but not too much side-to-side pitching. It settles in well, with confidence-inspiring handling. The steering is over-assisted, but the small turning circle and rather quick ratio between the steering column and the steering rack help create an impression of agility, especially around town. That and the compact dimensions and straight body sides make threading through narrow gaps quite easy.

Even on the 18-inch First Edition wheels, the ride feels smooth and only picks up the worst sharp-edged bumps and potholes. For a tall vehicle, this feels like a well-earned compromise; supple without being overtly stiff. Visiting the ‘burbs should be a positive and reasonably comfortable experience.

The result is a rather likable and fun-to-drive little thing, with a practical and comfortable cabin. For the die-hard Jeep aficionado, the upcoming Recon will be a better bet, but for the suburban family, the 2023 Jeep Avenger would be an ideal and quite handsome second car. Why it’s not coming to the US is still a bit of a mystery.