The 7-seater Jeep Meridian is aimed at families looking for more space and flexibility, while retaining the Jeep DNA.

The timing couldn’t be better. The Jeep Meridian arrives as the 7-seater category sees new action in several segments and just after the exit of the Ford Endeavour, which has opened a small but crucial void for the Meridian to fill. But most importantly, the Meridian is Jeep’s second mainstream model in India. Until now, the Compass, which was launched way back in 2017, was the sole pillar of Jeep in India on whose shoulders hung the company’s fortunes. Niche models like the Wrangler and Grand Cherokee are good for image, but Jeep needed another volume model to gain critical mass in the fast-growing and expanding Indian SUV market. So, will the Meridian click like the compass did over five years ago take some of the weight off the shoulders? That the Meridian is based on the Compass is a good starting point, but how well does it fare to compete against the swell of other three-row SUVs that have hit the market in several price ranges over the past few years?

With the Meridian, Jeep has not only bolted on a longer rear end to make a three-row variant of the Compass, but has creditably redesigned the entire car with a significantly longer wheelbase and new body panels. The meridian is 4,769 mm long, which is just over 364 mm longer than the compass. Much of that length comes from an extended wheelbase, which is a substantial 2,782mm – 146mm more than the Compass. In fact, the Meridian’s wheelbase is the longest in its class, a tad more than even the Fortuner. And it’s the long wheelbase, along with the relatively short front and rear overhangs (critical to a Jeep’s off-road ability) that give the Meridian superbly balanced proportions. The Meridian is actually more Grand Cherokee-like than a stretched Compass, and that’s because of the rich details all around.

A good portion of chrome running along the underside of the familiar seven-slot grill and the top of the slim headlights sets the Meridian apart nicely as the Compass’ big brother. The two-tone roof with a blacked-out D-pillar and a chrome frame above the doors that nicely accentuate the silhouette’s look is very exclusive too, as are the narrow taillight clusters that are nicely integrated with the chrome trim. The Meridian’s smart set of 18-inch alloys and chunky 235/55 R18 tires add to the road presence. The Compass was a good-looking car, and the Meridian looks even better. And the appearance in this segment is half the battle won.

The dashboard is largely the same as the Compass and that’s not necessarily a bad thing, as the Compass itself received a major interior upgrade for 2021. The quality of materials, solid door handles and chrome finishes exude an upscale feel. . But a little more differentiation, other than the two-tone brown and black color scheme (the compass is all black) and the differently stitched seats, would have been welcome. In addition, some of the plastic lower down in the cabin and the seat base feels a little hard and shiny, which stands out against the brown seat upholstery.

The all-digital dash also carries over from the Compass, so you get a 10.25-inch multi-screen digital instrument cluster, a 10.1-inch infotainment system that has wireless Apple CarPlay and Android Auto, a sharp 360-degree camera. and crisp as ever, and one of the better interfaces out there.

There are front ventilated seats, wireless charging, driving modes, USB Type C and USB Type A ports and a panoramic sunroof, which houses all the must-have features that SUV owners want. But given where the Meridian will sit in the SUV market, a few more gadgets would have been in order. There are no front parking sensors or any ADAS features like adaptive cruise control, lane departure warning, which the XUV700 and Gloster have made the norm. In practical terms, there’s enough room to store your stuff on long journeys, but the door pockets are a bit shallow to accommodate a 1.0-litre water bottle.

It’s when you move to the middle row that you can feel the change. Although legroom is similar to the Compass and width is only slightly more, thanks to the narrower door pockets (no room for large bottles here either), the seats are a big improvement. Firstly, you sit much higher than in the Compass, so lower thigh support is automatically improved, which is further enhanced by the re-profiled seats which have a larger squab.

The high seating position and large window make it easier to look out, and this improved visibility is always welcome on long drives, as are the folding backrests. However, unlike other 7-seaters, the middle row doesn’t slide, which is a shame as this could have provided some much-needed extra legroom. Keep in mind that the Meridian’s rear seat isn’t very wide, a common complaint with the Compass, so traveling three up can be limiting.

The third row is quite disappointing considering the space offered in other 7-seaters. Sure, the one-touch or one-pull lever that tilts and tumbles forward both sections of the 60:40 rear seat base makes it easy to access the last row, but the low roof forces you to twist a bit to wiggle inside. You get ceiling-mounted air conditioning vents served by a separate fan and evaporator, so staying cool is no problem. What is a problem is the overall space in the third row. The seats are placed on the floor and that pushes your knees up and against the middle row backrest. You will struggle to find room for your feet. It is not a place where adults can travel long distances comfortably and is best left for children or for luggage.

The Meridian fares better as a 5-seater, with the rear seats folded down to offer 481 liters of boot space. That said, even with the third-row seats in place, there’s enough room for a couple of soft bags. A nice touch is the power tailgate, which has the button inside the cabin and not on the tailgate itself, so you don’t have to reach up high to activate it. 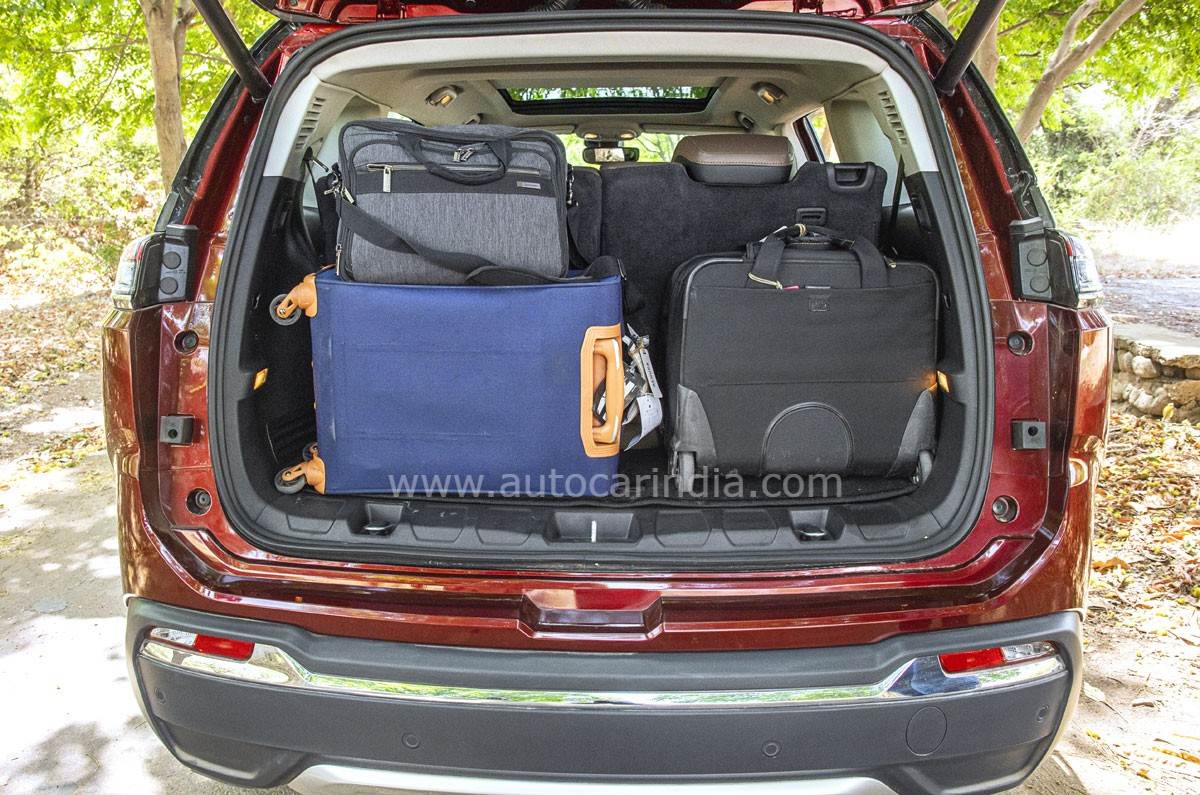 The Meridian comes with just one engine option, the same 170bhp, 2.0-litre diesel that powers it

the compass. However, unlike the latter, the Meridian does not get a petrol engine and is unlikely to get one anytime soon. What you do get are multiple gearbox options – the 4×2 gets a 6-speed manual gearbox, as well as the 9-speed automatic, while the range-topping Limited 4×4 only comes with a 9-speed auto, and that’s the one we drove.

A remapped ECU and different engine calibration have significantly changed the power characteristics of the proven 2.0-litre diesel in the Meridian. Power delivery is more measured compared to the Compass, which feels more responsive off the line. Jeep engineers say they opted for a more linear power delivery in the Meridian for a smoother ride. The fuel injection is also less abrupt, which has marginally reduced noise levels.

The Meridian is slightly quieter than the Compass, but when you rev ​​the engine hard, the characteristic gravelly, diesel drone is quite audible. If anything, the Meridian’s performance feels a bit blunted compared to the Compass, a result of the extra 110kg weight and smoother engine calibration. In isolation, the Meridian does not feel the least bit underpowered. The torquey 350 Nm diesel gives you a nice jolt from low speeds, all the way to the 4,500 rpm redline. But while the Meridian feels strong and has enough oomph, it doesn’t feel very sporty, and that’s because of the rather lazy 9-speed gearbox.

As in the Compass, this 9-speed has no rush to change gears and is slow to react during both downshifts and upshifts. As a result, the Meridian isn’t a particularly sporty or engaging SUV and feels happiest cruising all day. The Meridian is, in fact, a brilliant highway car, the powerful diesel engine combined with high gearing makes long-distance drives never so tiring, and the brilliant dynamics play more than a supporting role.

The Compass is known for its ride and handling, but the Meridian takes it to a whole other level. The stability on any surface is simply phenomenal and the way the Meridian smooths out a road is astounding. You really don’t have to worry about broken roads, or wince when you hit a pothole or are forced off a narrow road by an oncoming truck. The Meridian’s beefy independent suspension, which comes with Frequency Selective Damping (FSD) and Hydraulic Rebound Stoppers (HRS), just soaks it up.

There’s an underlying firmness to the ride, which isn’t buttery soft, but unlike the Compass, which had a hard edge, the Meridian’s suspension setup has more compliance. The Meridian also has less vertical movement than the shorter-wheelbase Compass, so passengers also feel more stable.

The confidence the Meridian gives you in corners is also amazing. There’s minimal body roll, the steering is precise with plenty of feel, and the big Jeep resolutely holds its line. The brakes are also progressive and it’s the predictability of the Meridian, the fact that it won’t behave erratically or offer any surprises when the road surface suddenly changes, that really wins your heart. There is simply no other SUV in this category or even a segment above and below it that rides and handles with such conviction.

If the Meridian is a class act on the road, it’s off-road that’s the star of the show. A superbly curated off-road track outside Chandigarh was a great opportunity to test the Meridian’s 4×4 capabilities. Whether it was crawling up stairs, seesawing over “shoulder breakers”, climbing up and down steep slopes, wading through water troughs or raising an articulated wheel like a dog trying to mark its territory, the Meridian did it all without breaking into a sweat. I didn’t even have to select “4×4 low”! You get several drive modes (Sand/Mud, Snow and Auto) but most owners will stick with the default Auto setting, which maximizes traction automatically depending on the surface you’re driving on.

The Meridian is a Jeep first and an SUV second, which means it has to have all the 4×4 hardware that lives up to the brand’s heritage. Not that owners will use it, but it’s a bit of insurance in the back pocket, so it’s good to know what the Meridian can do.

Jeep Meridian: should you buy one?

The Meridian is a highly capable SUV whose mix of on-road and off-road dynamics is unmatched. This makes it a brilliant car for long distances, no matter how good or bad the road surface. Performance is adequate, but you wish that with an increase in size and weight came an increase in power and performance. There is no petrol option either, which would rule out some buyers who have moved from diesel.

The well-built and well-equipped cabin has the added versatility of a third row, but the space on offer doesn’t make it practical for adults. The Meridian’s selling point is its Jeep DNA. It looks fantastic and has a lovely, tough feel. And if you want to play mountain goat, you can easily. What’s also impressive is how good a city-chic Meridian is. It’s easy to tip over on narrow roads and doesn’t feel cumbersome like the Fortuner.

Available in two variants, Limited and Limited (O), Meridian, which has no direct competition given its unique set of talents, has the makings of a winner. Competitively priced from Rs 29.90 lakh to Rs 36.95 lakh (ex-showroom, India), it undercuts the Fortuner by quite a margin. And like we said, with the Endeavor gone and the Kodiaq unavailable, there’s little choice in this segment. At this price, with its great ride and handling, tough build and off-road prowess, the Meridian is a good buy.