Evaluating sound systems as a car reviewer is sticky. Although my colleagues and I have listened to hundreds (if not thousands) of audio systems over the years, we are not audio professionals. There are people out there whose job it is to be sound professionals, and we should listen to them.

But! There are also people like me. I don’t have the professional ear, but I’ve had the privilege of listening to the best premium sound systems in the business and have always been obsessed with high-quality sound, whether it’s in a car, home theater or through headphones. And I’ve come to see a sound system as the holy grail of car stereos: the McIntosh 23-speaker system in the 2022 Jeep Grand Wagoneer.

Yes, this article gets the opinion tag, as this is strictly an opinion. Some audiophiles can perform professional and instrumented testing to determine what is truly “best”. But most of us just want a system that sounds as incredible as the price we pay for it. I can’t touch the new McIntosh system.

If you like premium home audio, you know McIntosh. They are among the best in the business and have been around for over 70 years. Not only that, but McIntosh is an American company and its equipment is made in America. Pairing with Jeep to put its system in a car that literally wears an American flag on its flanks only makes sense. This is also McIntosh’s first foray into the automotive industry in a long time, as its last full-car system was in the Ford GT in the 2000s. That car was more about the sound of its rumbling V8. This time, McIntosh is all about impressing luxury buyers in a six-figure Jeep.

I got to listen to the Grand Wagoneer’s audio system in a controlled environment at the Chicago Auto Show last year, and while I was very impressed, I wanted to wait until I had a chance to listen to it in a finished car while cruising down a freeway to make any comments. . Before we get to the in-car driving sound impressions, however, I sat down with McIntosh CEO Jeff Poggi for a chat about how this system came about and what McIntosh brings to the table.

“So we took this prototype car and we took it to Detroit,” Poggi said. “It was in a Jeep Grand Cherokee, and we brought a system like this, a Mcintosh two-channel sound system, set it up in a room, and we sat down with Sergio Marchionne, Ralph Gilles and Harold Wester. We gave them the demo, so here’s what we’re doing in two-channel audio, here’s what we can do in a car, we think this could be a really interesting brand match.” 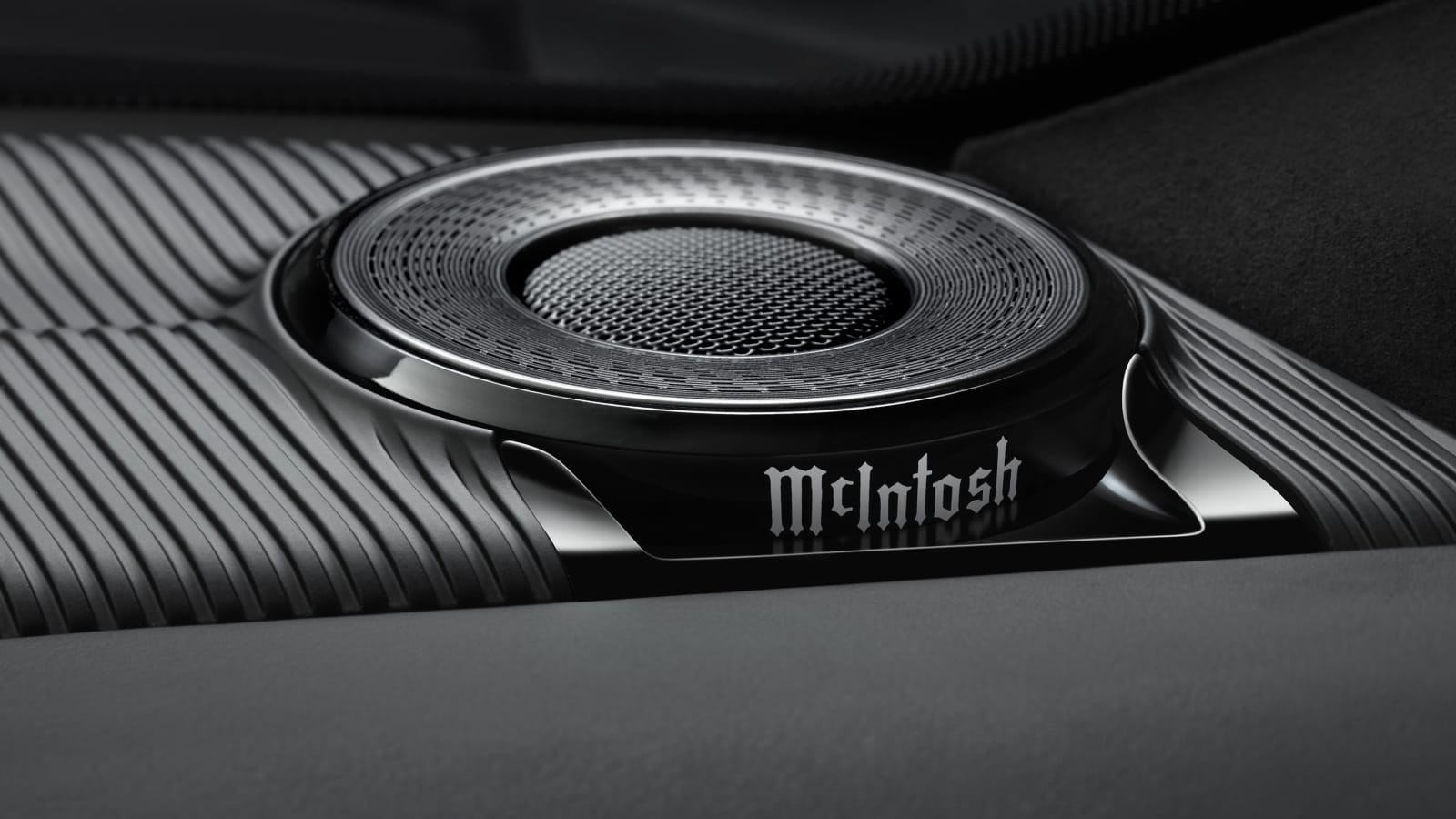 And just like that, Jeep was on board. At the time (over four years ago), McIntosh didn’t realize it was entering the Grand Wagoneer project, but all FCA executives knew this quirky sound system was going into their first true luxury car. Over the years, Poggi said, Jeep has really embraced McIntosh as a brand and let them run with the project.

“Everything in this sound system is custom designed for this experience in this vehicle,” Poggi told us. “And they were super partners. They really allowed us to put the products where we wanted for the best acoustics, which gave us all the capabilities we needed to give that goosebump experience that you can get, and we brought McIntosh’s core technologies from the home to the car, which was important for us to make it really authentic.”

When I eventually hopped into the new Grand Wagoneer for a seven-day test with this 23-speaker, 1,375-watt system, my Chicago Auto Show feelings were confirmed. The range of songs it could play with beautiful accuracy and control was second to none. Challenge it with overwhelming bass found in “Sail” by AWOLNATION, and there’s not a hint of distortion or dip in quality. Kick off a more delicate song with details you know only come out with great audio equipment, and the clarity and control is astounding. “Landslide” by Fleetwood Mac was epic – the guitar just surrounds you, and the lyrics add a sense of warmth to the whole scene. I really couldn’t find a single song that gave any problems to this sound system. And just like a set of new headphones or speakers can do, listening to many of my favorite songs was almost a whole new experience. I just wanted to keep listening to more and more songs to hear how this sound system would elevate them. 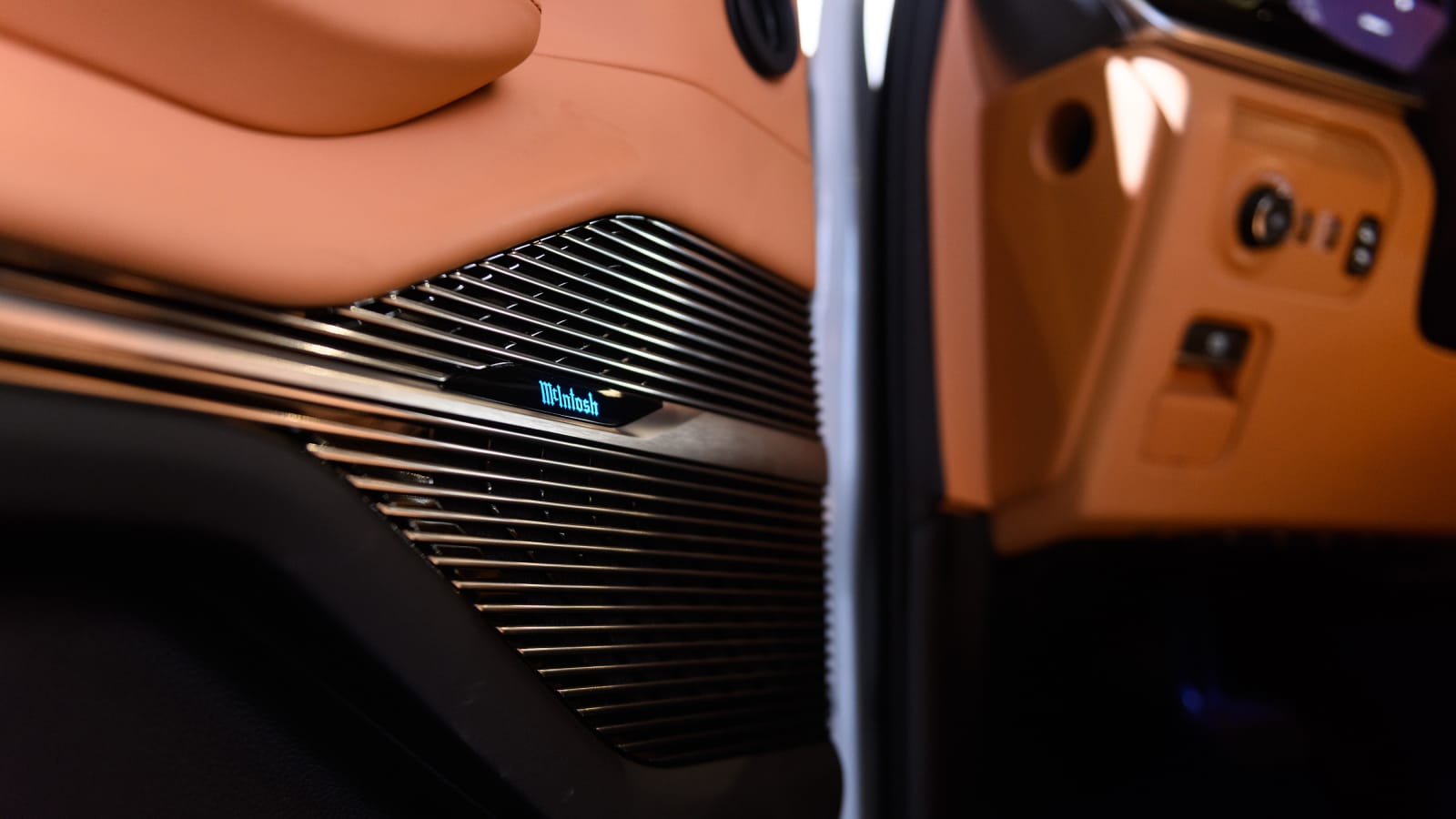 And before you think this sound system is just some fancy speakers with the McIntosh name on them, Poggi explained how this system uses key technology from McIntosh’s mega-expensive home systems. Poggi described two of the most effective technologies to us: Low Distortion/High Performance (a unique motor design) and Power Guard (a limiting software).

“So in the speaker you have a magnet and a coil,” Poggi said. “And that’s the basic motion of how a speaker moves back and forth, for electricity through the windings to move the magnet, and we have a special design patent around that motor design that allows us to push higher sound pressure levels out of that transducer to give us really, really low distortion. That’s the essence of McIntosh. We want to give you the most impact, the most dynamic range without distortion, coloration, none of that.”

You can turn the volume up as high as you dare in the Grand Wagoneer, and those speakers will play along with you, just like Poggi says, without any distortion or degradation whatsoever. This control can also be attributed to the next McIntosh tech Poggi detailed: Power Guard. 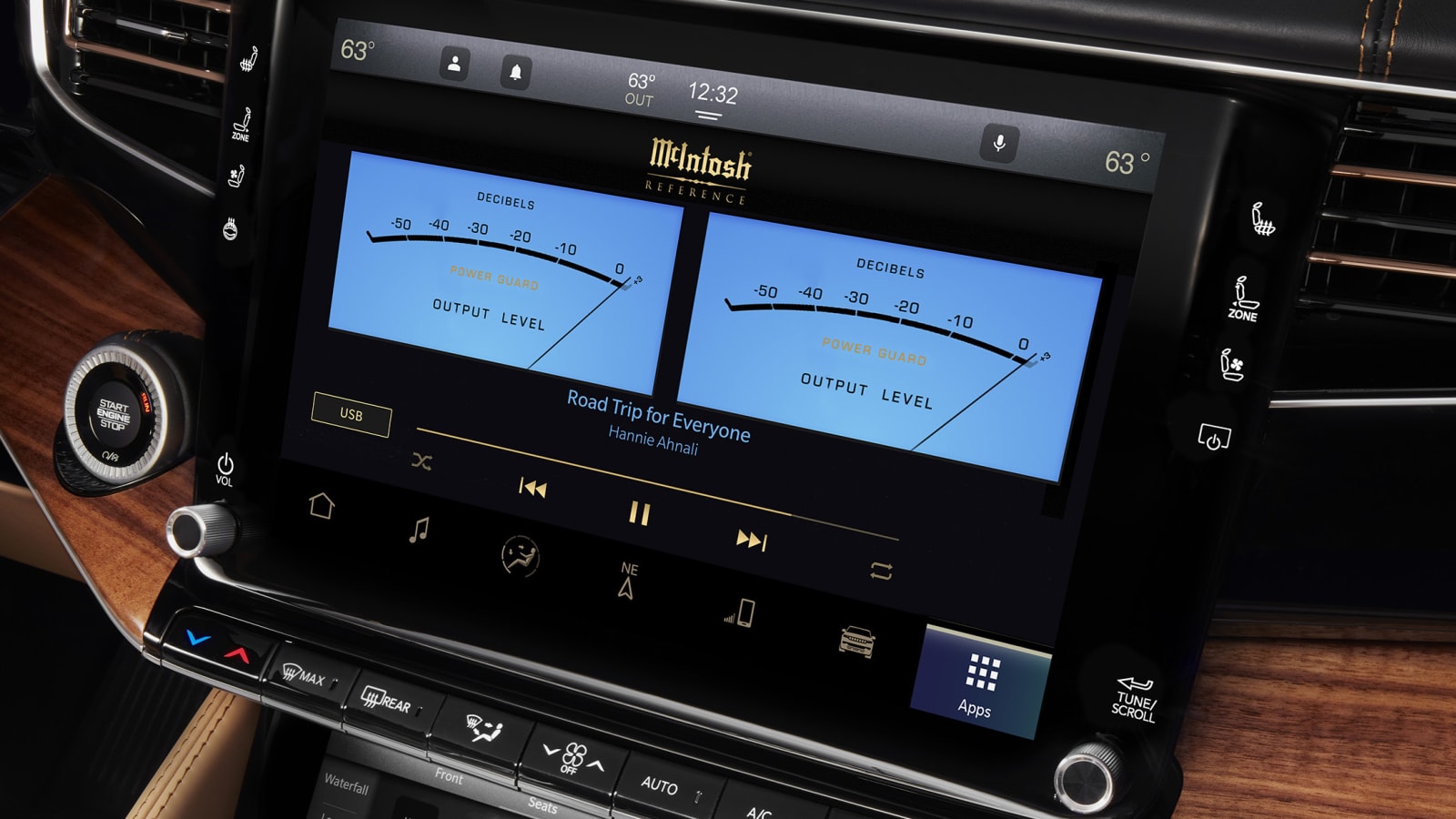 That’s some seriously great stuff right there for an audiophile. This attention to detail is also seen elsewhere in the Grand Wagoneer’s cabin. The door speaker grills are backlit in McIntosh’s signature blue color. Green McIntosh logos are visible as a trademark, and the speakers have similar aluminum details to that seen on the company’s home audio equipment. Even the volume knob is designed to replicate the tuning knobs on McIntosh systems.

And then there’s the user interface of the Grand Wagoneer’s large infotainment system that takes it another step forward. You can record a screen showing the sound meters if you’re extra geeky, like myself.

Not only is the classic two-channel stereo sound quality the best, but the software features such as the 3D surround sound have also been masterfully tuned. The big Grand Wagoneer’s cabin effectively turns into a glorious concert hall, as the music bounces around you in such a natural and accurate way. There are plenty of sound systems that offer gimmicky surround sound, but McIntosh’s system does not fall into that category. It’s so much better.

No matter what kind of driving I was doing – sitting at a light or cruising down the highway – the McIntosh system in the Grand Wagoneer offered the best car sound I’ve ever heard. The price of entry is high with the 23-speaker system only standard on the Obsidian and the top-of-the-line Grand Wagoneer Series III (optional on the Series II as part of a $3,995 package), but I don’t think anything even remotely close to this Jeep in price ($109,025 as tested) can offer a superior sound experience. However, the premium audio arms race only continues to gain momentum, and I’m excited to see what comes next.