With four doors, a spacious cabin and 4WD, the Grand Cherokee is a great option for road trips and even when you run out of asphalt in your quest for adventure. A perfect family SUV then?

There is no doubt that the Grand Cherokee has a strong and rich heritage. In India, however, it has only existed for one generation. But now the new iteration of the Cherokee is here, and so we are faced with the question – who is the target audience? So we spent a day with it to find out who this American SUV is trying to woo. And while it may have American roots, Jeep makes this fifth-gen Grand Cherokee right here in India, meaning you can take one home for Rs 77.5 lakh (ex-showroom) for now. 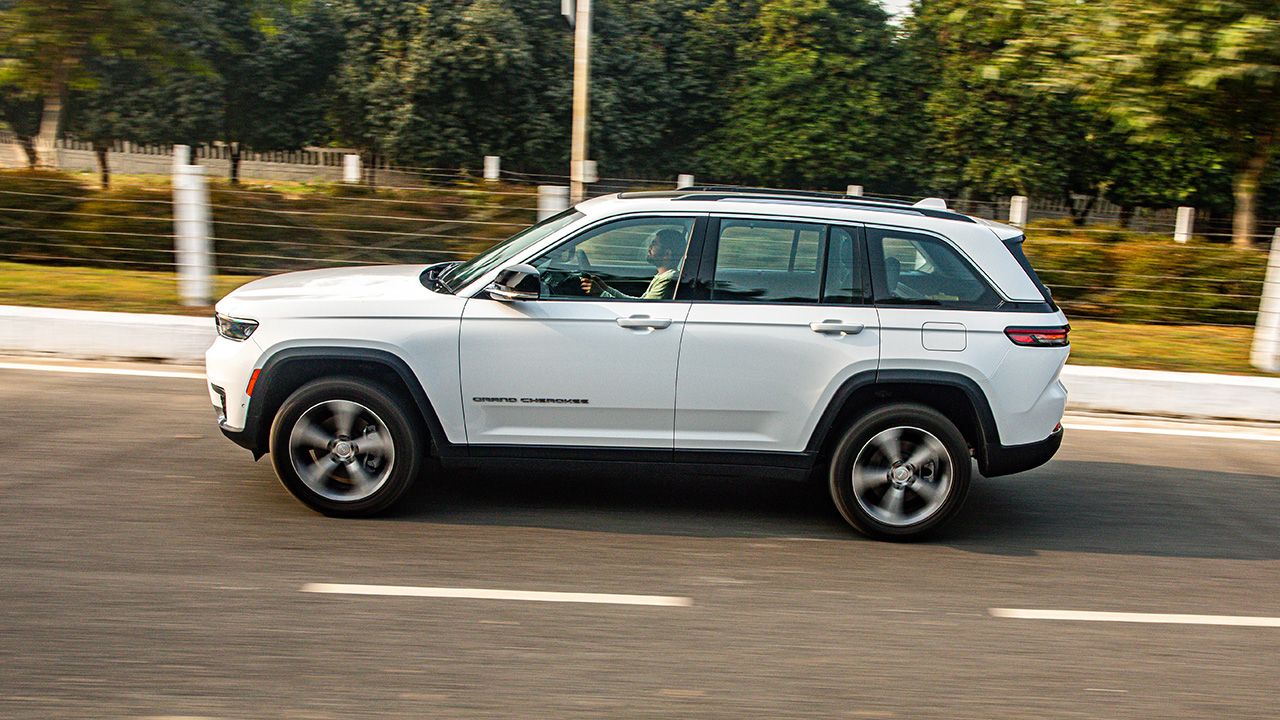 Not in your face

The Grand Cherokee has a subtle, understated style. It is nearly 5 meters long and 2 meters wide and stands just under 1.8 meters tall. So there is no doubt that it is a large SUV. But what’s interesting about its design is that Jeep hasn’t used styling elements on the side ostentatiously, giving it a very minimalistic and muted look.

Up front, it gets a seven-slat grille with traditional Jeep design, but it’s not blocked like in the Compass. Like the front, the rear design elements are sleek and slim. Overall, the design works in its favor. And while the Jeep Grand Cherokee doesn’t try to flaunt itself, people still stop and notice its size and the Jeep brand.

A two-ton luxury SUV must have its cabin atmosphere as its top priority, and it very much is. When you step inside, you are greeted by elegant leather upholstery in black. The roof cladding and pillars are done in a lighter shade, which provides an excellent contrast. The front seats are large enough for most adults, but the rear seats seem a bit small in terms of seat base length. But more on them later, because we believe there is a method to this madness. The panoramic sunroof is large and offers a nice view of the night sky – a must, especially when you’re indulging your adventurous self and exploring in your Jeep.

Now, the Jeep Grand Cherokee is an expensive SUV, regardless of your vantage point. You end up spending a little less than 1 million to bring one home, so naturally you expect it to be filled to the brim with goodies. And yes, it is!

The Grand Cherokee gets three screens – a 10.25-inch instrument cluster, a 10.1-inch touchscreen and a separate passenger screen – all of which are sharp in terms of quality and highly customizable. Touch response on both the central and passenger touchscreens is excellent and quite intuitive. The steering wheel and ORVMs are heated, while the front seats have both heating and cooling functions. The rear seats, on the other hand, only get the heating function, which seems like a miss, because cooled rear seats would have added to the overall appeal of the cabin. There is a 360-degree camera that helps you park a machine in tight spots. The IRVM has a camera feed, which shows you a wider angle than a regular mirror. Jeep has also kept the traditional mirror in case the camera feed doesn’t work for you. 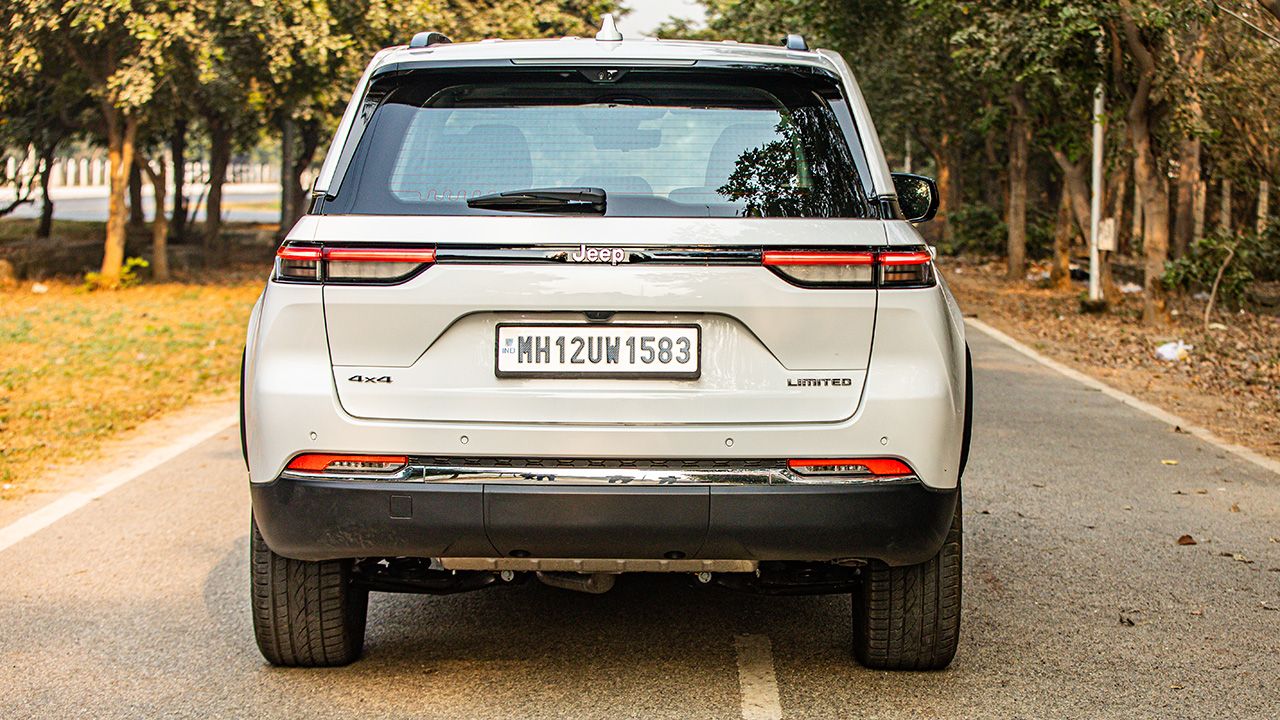 Are you staying safe?

In terms of safety, Jeep has left nothing to chance. The Grand Cherokee gets eight airbags inside the cabin to protect the occupants. Then there is ESP and hill-hold assist. And yes, the electronic parking brake does not automatically disengage if you are not wearing your seat belt. The Grand Cherokee also gets full-time 4WD, so you don’t have to worry about traction. For braking work, it gets disc brakes on all four wheels. In addition, there is a seat belt reminder, which warns you even if a rear seat passenger has not put on their seat belt.

If I had to use one word to describe the driving experience it would be “comfortable”. The Jeep Grand Cherokee can be easily driven by anyone. The size of the SUV sort of shrinks as you drive, and the cameras all around help a lot. There’s only a 2.0-litre turbo-petrol engine on offer, and while some might call it a bit small for an SUV this big, it’s not really the case – in fact, it’s sufficient and does what it’s supposed to do efficiently . The engine is responsive when you put your foot down, and getting to triple-digit speeds and beyond is a quick affair. Yes, the performance isn’t hair-raising, but then you don’t want it to be when you’re sitting in a two-ton SUV.

You see, the ride is plush and keeps everyone comfortable, no matter how rough the road. Now, if you brake too hard at high speeds, things will get nervous inside the cabin. And so the Grand Cherokee comes across as an SUV that wants you to take it easy—you know, something you can drive with your hands on the wheel in a relaxed way. But when it comes to covering distance, it munches miles faster than a man in an eating contest. The only thing that will leave you wanting is the fuel efficiency, which during our test drive ranged from 5 – 8 km/l.

The X factor: The Grand Cherokee is one of the rare luxury SUVs that puts you behind the wheel, rather than the passenger seat.

The Jeep Grand Cherokee CKD was launched at Rs 77.5 lakh