Good things come to those who wait. From the moment the JT Jeep Gladiator debuted at the 2018 Los Angeles Auto Show, some enthusiasts thought it needed something more. And by something more, they actually meant something less. They wanted a version of the Gladiator with only two doors, not the crew cab only variant. Stellantis, then FCA, teased those enthusiasts in 2019 with a two-door concept at Jeep’s Easter Safari. But a tease is really all it was, and hopes for a regular-cab Gladiator faded as the years passed and no production version arrived.

Just as it took Jeep over a decade to bring the four-door Gladiator into production, if a two-door version were to become a reality it would likely require an ideal mix of consumer taste, corporate leadership and financial factors to make it happen. In other words, it would be an uphill battle. But enthusiasts never give up on their dreams. Those dreams got a little closer to reality thanks to a custom build unveiled at this year’s SEMA show, and enthusiasts welcomed it with glee, hoping that Stellantis will see that there are people out there who want a two-door Gladiator. After all, there is a two-door variant of the Wrangler available now.

Enthusiasts shouldn’t get too excited that a two-door Gladiator is actually happening, but this custom build certainly looks like an off-road version of a two-door production Gladiator if ever there was one. This build is a collaboration between Quadratec, the well-known aftermarket Jeep modification supplier, Unofficial Use Only, a custom builder based in Michigan, and Tread Lightly!, a national organization dedicated to protecting recreational access.

The “JTe” name comes from a combination of code names that Jeep uses for its vehicles. “JT” is the code name for the Gladiator, just as “JL” is the code for the current generation Wrangler. The lower case “e” at the end means “electric”, as this is a plug-in hybrid. Not to spoil any enthusiasts’ fun, but this “JTe” is actually a 4xe Wrangler, although the builders had to start somewhere since Stellantis didn’t help with this build. It may have the bones of a Wrangler, but this build has the heart and spirit of a gladiator.

A gladiator for the future

Although this custom build started out as a Wrangler, it’s really a Wrangler and Gladiator hybrid build. Greg Henderson, the lead builder of the project, detailed the process of creating this outstanding pickup truck. The truck rests on the original JL four-door Wrangler chassis, without stretching, but the roof and cab have been reconfigured with Gladiator parts.

Henderson stretched the bed 10 1/2 inches, raised the suspension two inches, and the truck retains the original Wrangler 4xe Rubicon powertrain. The point is, if Jeep wanted to produce a two-door Gladiator, they already have many of the tools needed to make it happen. The only question is whether the market really demands a regular cab pickup?

Nostalgia has its moment 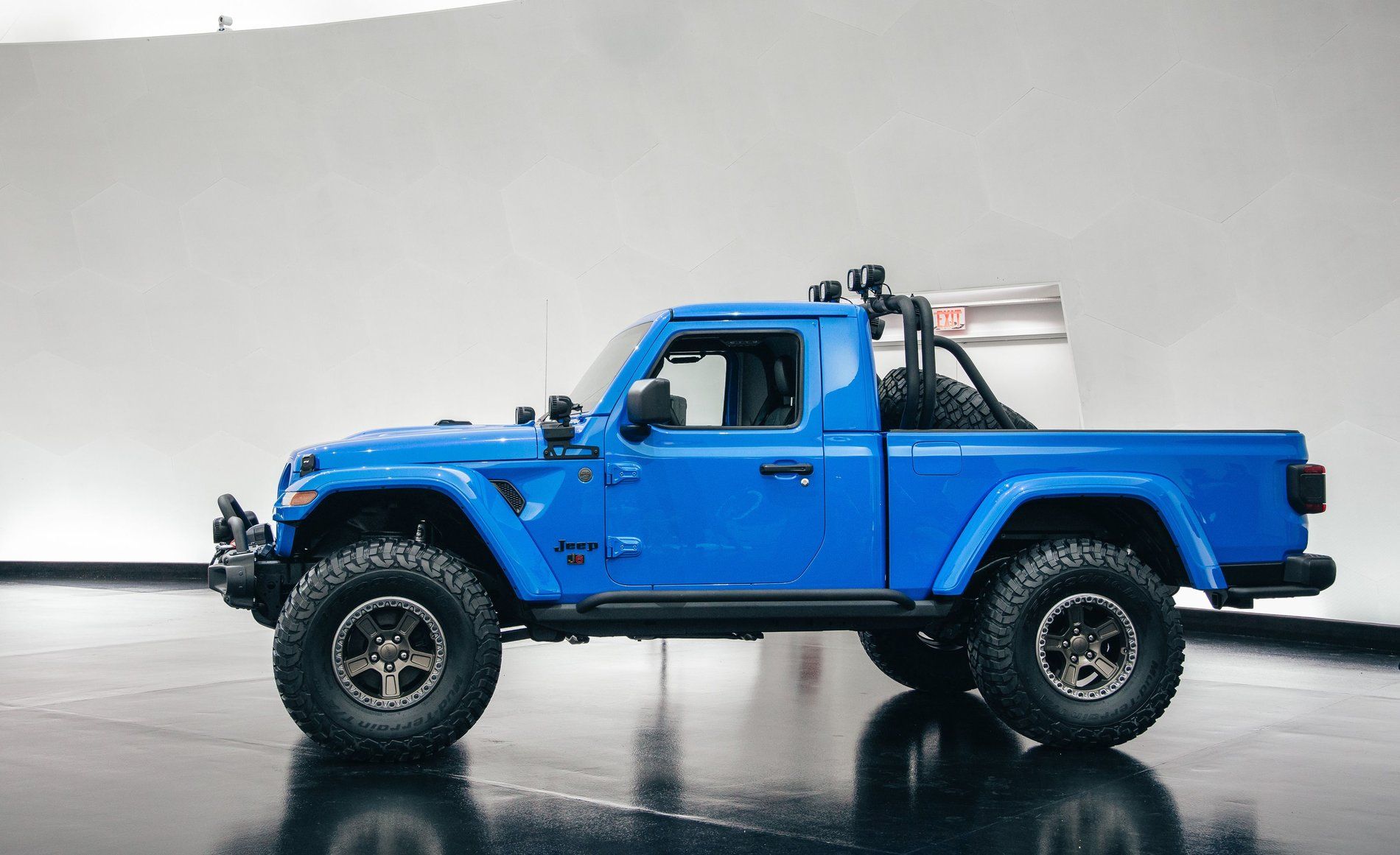 From an overall perspective, the likelihood of a regular cab Gladiator is slim, especially given the gradual killing off of the regular cab pickup from so many other brands over the years. Just this fall, Ram announced that they will no longer offer the 1500 Classic regular short-cab pickups. The standard long cab box will still be available, but those days are likely numbered as well.

Chevrolet and Ford still offer a regular cab. They are full size trucks though; Consumers have been denied the opportunity to purchase a regular mid-size cab for about a decade now. And in the compact truck segment, well, that category really doesn’t exist anymore. The Gladiator two-door would really fall into the compact, maybe midsize segment, making it a black sheep in the truck world, but that could be a positive.

One thing going for the two-door Gladiator now is the current culture of embracing the past. Automakers have revived so many nameplates in recent years, many names not seen since the 1990s. Honda restamped its passport, Acura revived the Integra, Chevrolet revamped the Blazer and Trailblazer, Jeep regenerated the Wagoneer, and in the truck world, Ford ditched the Ranger and is back on the Bronco.

In many of these new incarnations, the similarities between the old and new models are largely in name only; The Blazer is now a crossover and the Ranger is a bulkier midsize truck. The Gladiator is also a revived name; it was once a regular cab pickup in the 1960s. Perhaps nostalgia for old names will also translate to nostalgia for the once common body style.

RELATED: If only GM would build these Chevrolet Silverado pickup trucks with a cab

A gladiator for the right place and time

JL Wrangler two-door sales account for approximately 12% of annual total Wrangler sales each year. Jeep would have to decide if it would be worth the investment for the two-door Gladiator. Jeep would also have to consider Corporate Average Fuel Economy standards in place by the U.S. government that set minimum fuel economy requirements based on the dimensions and ratings of a vehicle. These rules played a role in the demise of the small pickup several years ago. The collector market really redefined the status of mainstream cabs – it’s a bubbling market, as single cabs from the 90s and 00s sometimes sell for big bucks, north of $20,000.

In the days since the little pickup truck disappeared, buyers’ expectations for their pickup truck have changed. Trucks are now all-purpose family vehicles, equally capable of taking the kids to weekend soccer camp or trudging off-road. Right now, the small regular cab pickup is being counted out, but Jeep may be the one to wow the crowd once again with this bold return. What better way to impress the audience once again than a Gladiator?