Skip to content
Disclaimer: We reviewed a 2021 2022 model as Jeep does not currently have a 2022 Grand Cherokee L to test. The 2022 Grand Cherokee L adds a passenger screen, two rear entertainment screens and 3 new colors to its options list but is otherwise no different than what you see on this page.

The Jeep Grand Cherokee has always been an easy vehicle to recommend and it seems to appeal to a wider audience than other SUVs in its price range.

It is a versatile and durable rig with great towing capacity, good off-road chops and optional V8 power. Add the adventurous allure of the Jeep brand and you begin to understand why it is so popular.

Redesigning something that already works well is a monumental task for engineers, but they’ve done a great job with the new Grand Cherokee, available for the first time in an extended wheelbase version with three rows of seats for up to 7.

It’s the version that Jeep let me borrow for a week. A Grand Cherokee L Summit Reserve in Velvet Red Pearl loaded with almost every option including the V8. Checking that V8 box on the options list ($3495 on Overland and Summit models) gives you the extra two cylinders, but perhaps more importantly, that wonderful warm resonance under power that only a V8 seems to provide. You also get a towing capacity of 3266kg when properly equipped, a figure that nothing else in the class can even touch.

The familiar 5.7-L Hemi V8 makes a turbo-free 357 hp and can snuff out four of its cylinders under light load for better efficiency. It’s mated to an 8-speed automatic transmission that sends power to all four wheels via Jeep’s Quadra-Drive 2 system. It’s the most advanced four-wheel drive system they offer and it combines a two-speed gearbox with an electronic limited-slip differential on the rear axle.

This Summit Reserve model was further equipped with Quadra-lift, Jeep speak for air suspension that can raise the Grand Cherokee by 60mm in the “Off-road 2” setting. It is now also equipped with adaptive dampers for greater stability and improved control.

Unless you check the V8 box, the base engine is the also familiar and excellent Pentastar V6 that can still tow up to 6200 lbs. 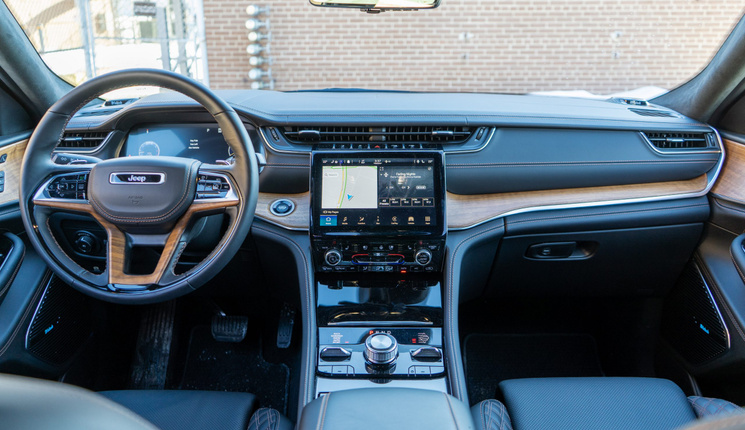 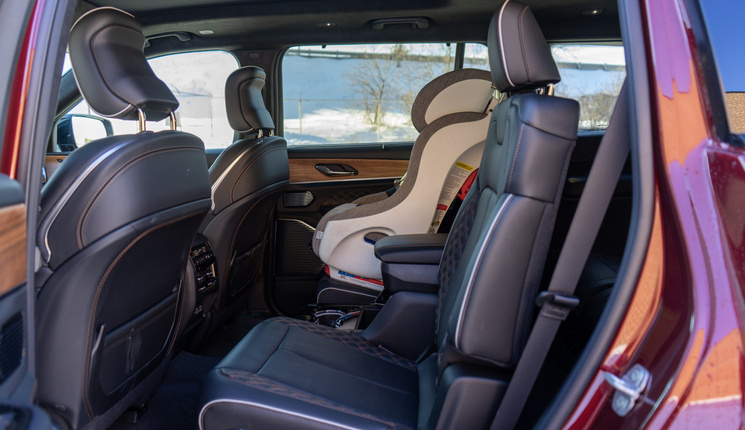 Those are the greasy bits, but what you’ll really care about is the inside and it’s nothing less than a complete makeover over the last model’s rather more utilitarian digs. You’ll find luxurious leather mixed with open-pore wood trim and metal. The buttons and switches feel expensive and there is so much technology that it will take you more than a week to familiarize yourself with everything. Luckily, I drove the Grand Cherokee’s big brother, the Grand Wagoneer, which gets a similar treatment inside so I felt around.

The Grand Cherokee has seemingly become even more upscale this generation and its luxury digs really drive this home. The price does just as well, with my tester not far from the $90,000 mark, a significant sum that puts this in the same territory as the BMW X5 and Mercedes GLE. If you think that’s a lot, you probably shouldn’t be looking for the Grand Wagoneer. To be fair, if you leave some of the toys on the table and don’t go for this top-spec Summit Reserve trim, you’ll be walking out with a much smaller hole in your pocket.

But toys are nice to have, and the night vision system was impressive, not only because it was so well integrated and easy to use, but because it quickly detected and highlighted pedestrians and cyclists on dark residential streets long before I could see them. The new digital reversing camera was sharp and had an integrated tray to keep it clean. It was a very welcome option on this long three-row vehicle. The 10.25-inch digital instrument cluster was also highly customizable and configurable to display as little or as much as you want. The Uconnect 5 is a big improvement over its predecessor and adds wireless updates thanks to its Android-based operating system. 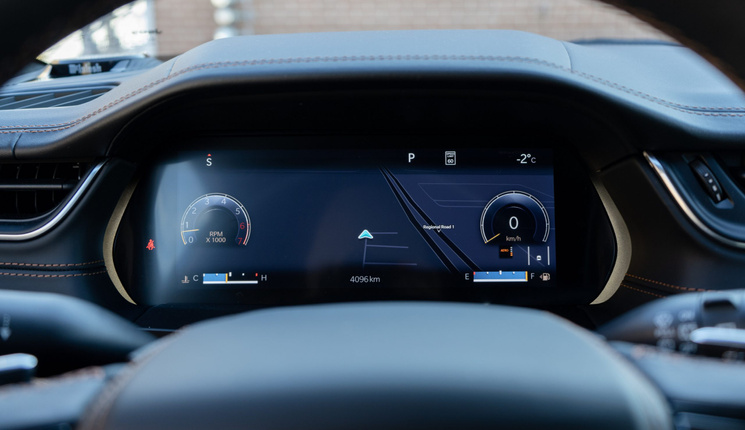 A dizzying array of helpers and babysitters are also baked in, such as adaptive cruise, active lane management detected by drowsy drivers, emergency braking and innovative ones like intersection collision assist.

My tester came with 12-way heated and ventilated seats with built-in massage that I used quite a bit. Jeep graciously added real physical buttons to control high-traffic items like climate control and the stereo, including separate buttons to heat and cool your seats, a nice addition that was missing from the former. Not as nice is the decision to coat the entire console in glossy piano black which only looks good for about 30 seconds after you clean it. At all other times it is a dust and finger grease magnet.

The second row seats are also heated and cooled and are just as comfortable as the front ones. They can be quickly tilted away giving easy access to the electric folding third row. I found the back row less roomy than the Kia Telluride and Ford Explorer but less cramped than the bench in the Toyota Highlander. 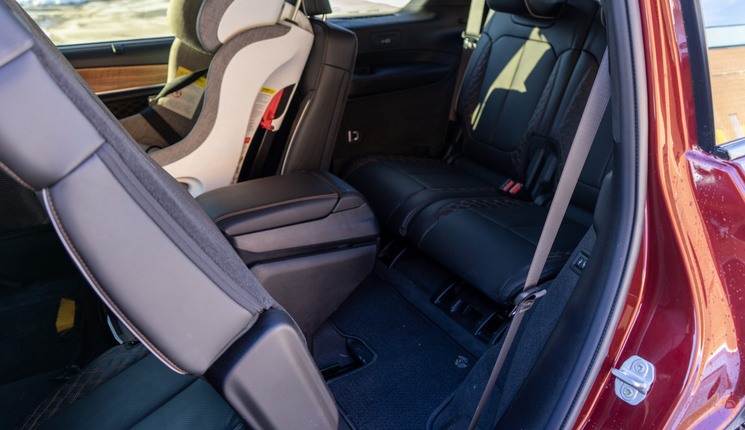 I wasn’t in love with the McIntosh 19 speaker stereo upgrade, it looked impressive as were the speaker grills. It lacked the warmth that I look for in a premium system..

The Grand Cherokee L is a very satisfying vehicle to drive, especially with the Hemi. It provides that feeling of lazy and endless torque with a healthy burble that subtly permeates the cabin.

A wider track makes for a stable freeway ride and despite its length it was easy to drive on narrow city streets but felt more at home on the wide asphalt in the suburbs. Somewhat exaggerated steering gives little feel but works with the luxurious initial demeanor of this Grand Cherokee. The ride with the air suspension was soft and body motion was well kept in check. 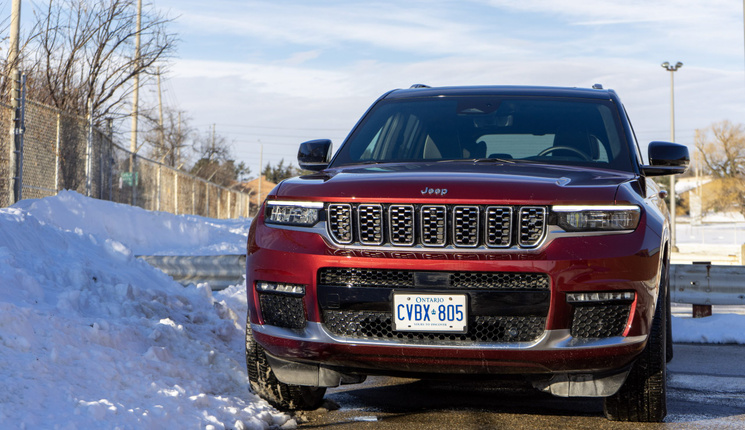 I didn’t set out to prove that a Grand Cherokee L can climb a small mountain, but most people who buy one probably won’t either. To be fair, only spec-equipped Overland models get the famous Trail-rated badge with its plethora of undercarriage plates, but you can be sure that any Grand Cherokee will tackle a rocky trail or backcountry trail with minimal effort, which others claim in this segment cannot do.

The Selec Terrain Management, accessed via a small dial on the console, can toggle between Sport, Rock, Sand, Mud/Snow or be left in auto mode to sort it out without your input. Most of the time, you can just point the Grand Cherokee where you want it to go and it will come out the other side shiny side up every time.

Where the new Wagoneer – as impressive as the big rig on the body is – can feel a bit gigantic, the Grand Cherokee feels just right. It doesn’t have the same space in the third row, but for kids it will be more than fine. Jeep redesigned the Grand Cherokee but didn’t forget what has always made them a hit with shoppers – versatility and a premium feel. In that regard, the Grand Cherokee is an even better buy than it was before.

The vehicle was provided to the author by the car manufacturer. Content and vehicle evaluations were not subject to approval.